That was just the beginning of what would unfold into an outstanding entomological career.

So we were delighted to see that UC Davis doctoral alumnus Kelli Hoover, a professor at Pennsylvania State University, is one of the 10 recipients of the Entomological Society of America's 2021 Fellow awards.

Hoover is internationally known for her research on invasive species, including the Asian longhorned beetle, gypsy moth and spotted lanternfly, all serious pests.

Hoover, who received her doctorate in entomology from UC Davis in June, 1997, studied with major professors Sean Duffey (1943-1997) and Bruce Hammock. Hoover joined the PSU faculty as an assistant professor in 1998, achieving full professor in 2010.

Hoover's areas of expertise include biology and ecology of invasive species, insect-microbial symbiosis, tritrophic interactions, insect virology, and pollination of forest trees. She is active in PSU's Center for Chemical Ecology, Center for Pollinator Research, and the Insect Biodiversity Center.

Nominator Gary Felton,professor and head of the PSU Department of Entomology, said it well in his nomination letter: “Hoover is internationally recognized for uncovering detailed mechanisms of how phytochemicals reduce mortality by baculoviruses through physiological impacts on the larva's midgut (epithelial cells and peritrophic matrix." Hoover and her co-advisors “patented baculovirus formulation additives that counteract these physiological effects, and thus increase the sensitivity of larvae to infections.” Asian longhorned beetle. (USDA Photo)
“Kelli was a delight to have in the laboratory at UC Davis,” said Hammock, now a UC Davis distinguished professor who holds a joint appointment with the Department of Entomology and Nematology and the UC Davis Comprehensive Cancer Center. “She started her Ph.D. at Davis at an exciting time when we were trying to move recombinant baculoviruses into practical agriculture as green pesticides.  Among the laboratories of Sean Duffey, Susumu Maeda, Kevin Heinz and extramural collaborators around the world, we had an exciting critical mass ranging, including virology, peptide chemistry, scorpion venoms, genetic engineering, pest management and others.”

“Kelli's interest in tritrophic interactions and her outgoing and engaging personality were just what was needed to pull the team together,” said Hammock, a 2010 Fellow. “As one would expect, Kelli's talents in science and leadership have served her well at Penn State.  There her baculovirus work transitioned into a broader program in gypsy moth control and the invasion of the Asian longhorned beetle provided an opportunity to look at gut symbionts.  Every project that Kelli touches seems to yield exciting results with practical implications.  I am thrilled that the ESA has recognized what a star she is in our field.” Asian gypsy moth. (Photo: John H. Ghent and Manfred Mielke, USDA Forest Service, Bugwood.org)
UC Davis doctoral alumnus Bryony Bonning, a professor at the University of Florida and a 2013 ESA Fellow, commented that “Kelli is so deserving of this award.”

“I worked with Kelli for two, delightful years at UC Davis, and was particularly impressed by the number of undergraduate students that she managed to mentor at the bench!” Bonning said. “Since then, she has established a stellar research program that has recently focused on both the fundamental biology and management solutions for invasive pests including Asian longhorned beetle (ALB) and spotted lantern fly. Analysis of ALB semiochemicals resulted in a blend now sold by two companies and used in North America and Europe for ALB management."

“In collaboration with engineers, she has also spearheaded development of a method to prevent introduction of invasive species in the wood packing associated with international shipments,” Bonning noted. “This dielectric heating technology, used to treat and kill insects hidden in the wood packing, is at the stage of commercial equipment prototype. These examples reflect both the interdisciplinary breadth of Kelli's research program and the seamless melding of science to address fundamental questions that lead to practical solutions. This breadth of scope and ability to identify commercially useful components of the system is a relatively rare phenotype among entomologists! Further, Kelli is driven to engage the necessary parties (scientists, stakeholders, policy makers) toward implementation of strategies to prevent or manage the impact of invasive species on U.S. agriculture." Spotted lanternfly. (Pennsylvania Department of Agriculture)
“The vast majority of Hoover's studies focuses on basic and applied research on invasive species, such as the Asian longhorned beetle (ALB) and gypsy moth and most recently the spotted lanternfly,” Felton wrote.

Active in ESA since 1996, Hoover has judged student competitions; organized numerous national or branch meeting symposia, and served as a subject editor for Environmental Entomology. She chaired or co-chaired organizing committees for three annual meetings of the International Society for Invertebrate Pathology and held the office of treasurer for four years.

Kelli received her bachelor of science degree in 1979 from UC Berkeley, with honors, majoring in the biology of natural resources. She obtained her master's degree in biology, with an emphasis on entomology, from San Jose State University in 1992 before joining the doctoral program at UC Davis and completing her PhD in 1997. In 1998, after a year as a President's Postdoctoral Fellow at UC Berkeley, she joined the faculty in the PSU Department of Entomology.

Fellows of ESA are individuals who have made outstanding contributions to entomology— via research, teaching, extension, administration, military service, and public engagement and science policy —and whose career accomplishments serve to inspire all entomologists, according to the ESA.

A tip of the insect net to Kelli Hoover. 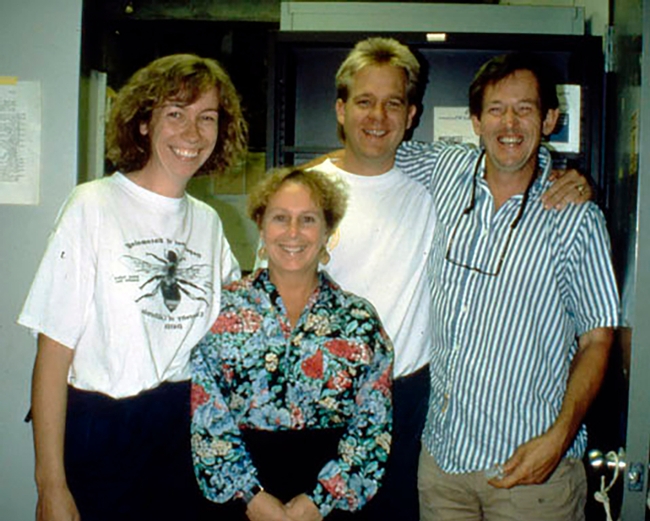