Bohart Museum of Entomology information sheet about hornworms.
If you love tomatoes, you probably hate hornworms.

Frankly, the garden's not big enough for both of you, and one of you has to go. It's not you. It's the hornworm.

"This one is nobody's friend if you're a gardener and like to grow tomatoes," says entomologist Jeff Smith, curator of the Bohart Museum of Entomology's Lepidoptera collection,  in his recently posted video showcasing the hornworm and its adult form, the sphinx moth (Sphingidae family).

Smith is presenting a series of short videos on the "different aspects of the collection of moths and butterflies."

The origin of the name, the sphinx moth? "When the larva or caterpillar is disturbed, it rears up into an Egyptian sphinx-like pose," Smith says.

However, good luck finding hornworms. "They are so well camouflaged, that it takes forever to find them," Smith says. One way to know they're there is "because they make a piece of poop (frass) about as big as a pea," Smith says.

When the caterpillars are attacked, "they spit tomato juice on you, which doesn't taste good."

The UC Statewide Integrated Pest Management Program (UC IPM) says this about hornworms: "Hornworms feed on blossoms, leaves, and fruit. At high populations they can extensively defoliate plants and scar the fruit. They are rarely a problem in the warmer interior valleys unless natural enemies are disrupted, in which case, they can do serious damage. They are mostly problems in garden situations." A hornworm can do extensive damage to tomato and pepper plants. (Photo by Kathy Keatley Garvey)
UC IPM points out that "The adult moth is a strong flier with a wingspan up to 5 inches (12 cm). Development takes about 2 months in summer; the winter is passed in the pupal stage. There are two generations a year in most areas; larvae are usually most common in midsummer, but there may be a small population peak in late summer. Infestations tend to be more severe in warm inland areas." (Read more UC IPM information here.)

The Bohart Museum of Entomology also offers online information sheets, the work of Lynn Kimsey, director of the Bohart and a UC Davis distinguished professor of entomology. (The directory of subjects is here.)

"The larval stage (caterpillar) feeds primarily on tomatoes, but it also is known to attack other crop plants in the Solanaceae, including egg plants, peppers, and potatoes," Kimsey noted. "When the caterpillars are numerous, they can do extensive damage in a short time. The caterpillars feed on the upper portions of leaves and new stems, and occasionally, when the caterpillars are numerous, it will feed on the tomato fruit as well. They tend to remain out of direct sunlight, and so are found near the main stem of the plant during the day. They are more easily spotted when they move to the outer portions of the plant at dusk and dawn. Their presence is often first recognized by an excessive amount of frass (droppings) around the base of the plant. The hornworm caterpillar is 3½-4 inches (9-10 cm) long and pale green, with white and black markings." (Read more about the Bohart Museum's information on hornworms here.)

Meanwhile, have you ever been up close and personal to a hornworm?

We don't have any in our garden, so we borrowed a hornworm from a neighbor whose garden thrives with tomatoes and peppers. She plucked it off a pepper plant. "It seems to like the pepper plant better than the tomato," she said.

(Editor's Note: The Bohart Museum, located in Room 1124 of the Academic Surge Building on Crocker Lane, UC Davis, is the home of nearly eight million insect specimens; a live "petting zoo," comprised of Madagascar hissing cockroaches, stick insects and tarantulas; and a gift shop. The Bohart is temporarily closed due to the COVID-19 pandemic precautions but the gift shop is online.) 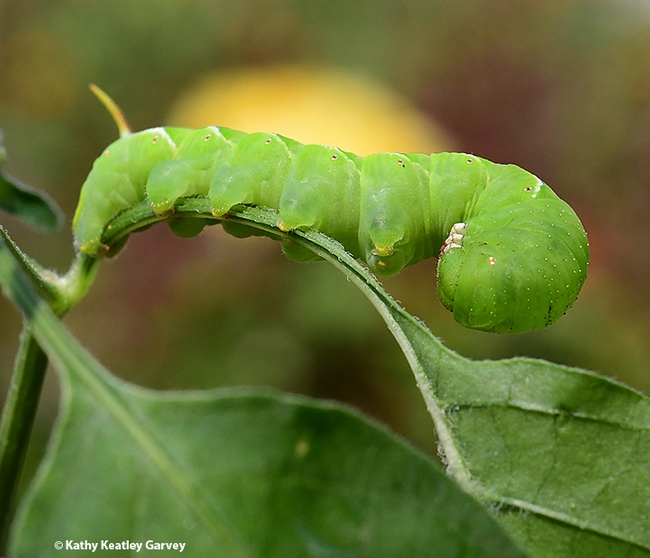 This hornworm is feeding on a pepper plant. (Photo by Kathy Keatley Garvey) 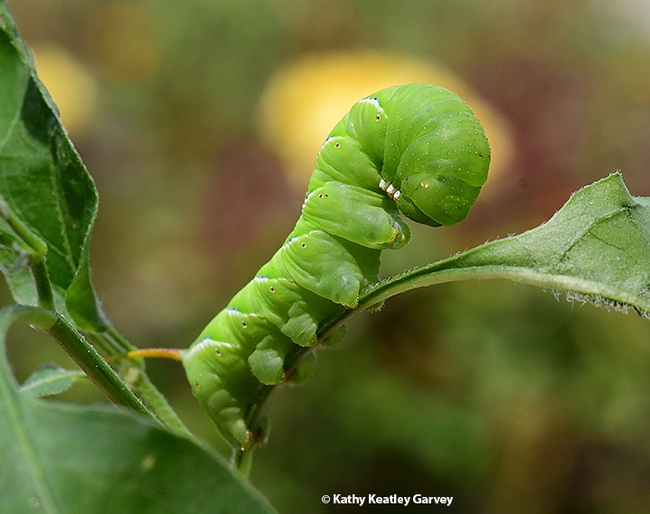 When the caterpillar or larva is disturbed, it "rears up into an Egyptian sphinx-like pose," says entomologist Jeff Smith, curator of the Lepidoptera collection at the Bohart Museum of Entomology. (Photo by Kathy Keatley Garvey) 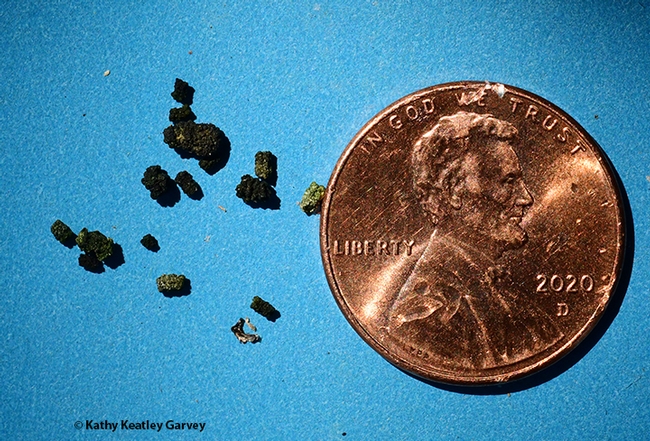 The frass (droppings) from a hornworm. It's a tell-tale sign you have hornworms in your garden. (Photo by Kathy Keatley Garvey) 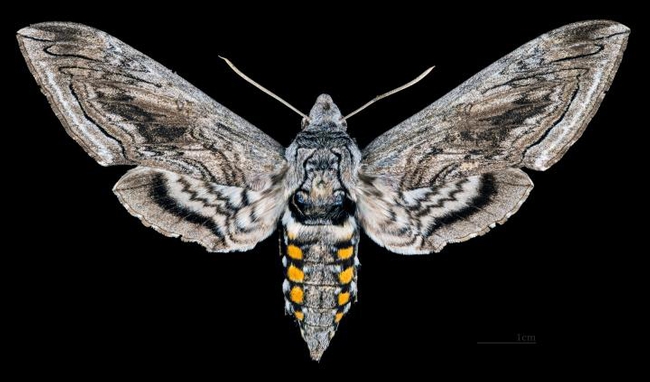 I am on a mission to save this creature because it is a natural and important part of our ecology.
I never kill the hornworms, I have planted datura in my yard as a host plant for them and it is working beautifully.
I'm aware that the datura can be invasive, so I keep it deadheaded so that I don't get seeds.
Currently I have 3 giant hornworms munching away at the datura. When they're done and burrow down, the plant then recovers.
I even rescue them from friends gardens.
I love it when the sphinx moth visits the flowers in the twilight.
They need better press. Most articles tell gardeners how to destroy them .
It is very disappointing and unfortunate.
Save the Sphinx moth!
Leave a Reply:

The Ants and Butterflies of Gates Canyon: Quite the Ecosystem
January 27, 2022