One danger with perusing seed catalogs in the winter is the inevitable, likely unwarranted, optimism that this year will be different.  This will be the year that I can grow something completely new, something that I've failed at before, or, if I start early enough, I could grow something meant for warmer climates.  I live in a Benicia microclimate where the cold and the gale-force winds make even growing tomatoes happenstance despite windscreens for the veggie beds.  I know my yard's limits.  But where's the fun in being practical all the time?  For a few dollars, a little effort, and some guarded optimism, maybe this will be the year for success!

Really, I'm talking about warm weather vegetable and fruit crops.  Anything that loves heat doesn't love my yard.  I've tried growing a type of Spanish melon – just a small one – three years running.  Each year, I've managed to eke out one, solitary, softball-sized melon that rots on the vine because I think that it will grow bigger.  Each year, I swear it will be the last attempt.  And in the winter, I look at the catalogs and decide to give it one more try, thinking that maybe a soil thermometer, a heating pad, or a grow light would help.  Nope.  Failure each time.

This year, in a triumph of hope over experience, I decided to try another type of melon, a watermelon.  I've tried growing watermelons before but was wholly unsuccessful.  But this time, I tried to be strategic.  I selected the ‘Mini Love' variety because it has small fruit (5-7 lbs) and a shorter period to reach maturity (70 days).  I didn't think I could plan on a long, warm growing period required for other larger varieties.  There were lots of options from which to choose, so the description of ‘Mini Love' as holding well in the field weighed in its favor.  We get busy in the summer, and the odds of missing the optimum harvesting window are high.

I experimented with starting some seeds early indoors and planting some directly outdoors.  Naturally, I got the labels mixed up so now I'm not sure which is which.  But they all seem to be growing at the same rate.  I then made it more challenging by growing several plants on vertical trellises.  I have some skepticism that the stems will hold a 7-lb watermelon, but my yard is small, and, well, why not give it a try?  So far, so good, although I barely rescued one watermelon in time from growing between the trellis and the fence.  That would have been a very skinny watermelon.

I've definitely made mistakes.  Apparently, watermelons should not be watered the last week before they ripen because over-watering will result in bland fruit.  Learning this information late in the summer raised two issues too late.  First, I have no clue when the watermelons will ripen.  Perhaps I should have counted out 70 days from when I planted the seeds, but I didn't.  Even so, I would have assumed it might take watermelons a little longer to ripen in our cooler climate.  In the future, it would be helpful to track planting information more carefully.  Also, I planted the watermelons in a veggie bed on automatic drip irrigation with other vegetables.  I now can't turn the irrigation off without harming the other plants.  The plants will just all have to get along and hopefully, the dreaded watermelon blandness won't occur!

Another mistake involved determining when to harvest the watermelon.  I interpreted “better field-holding ability” as “I can leave the watermelon on the vine and pick it later,” which then turned into too many days later.  This meant that a small part of the watermelon was a bit mealy.

After all this, did that optimism in winter pay off?  Yes!  It has been so much fun watching the vigorous watermelon vines grow, twining them up the trellis, and waiting for them to ripen.  And that first taste of watermelon?  Perfection. 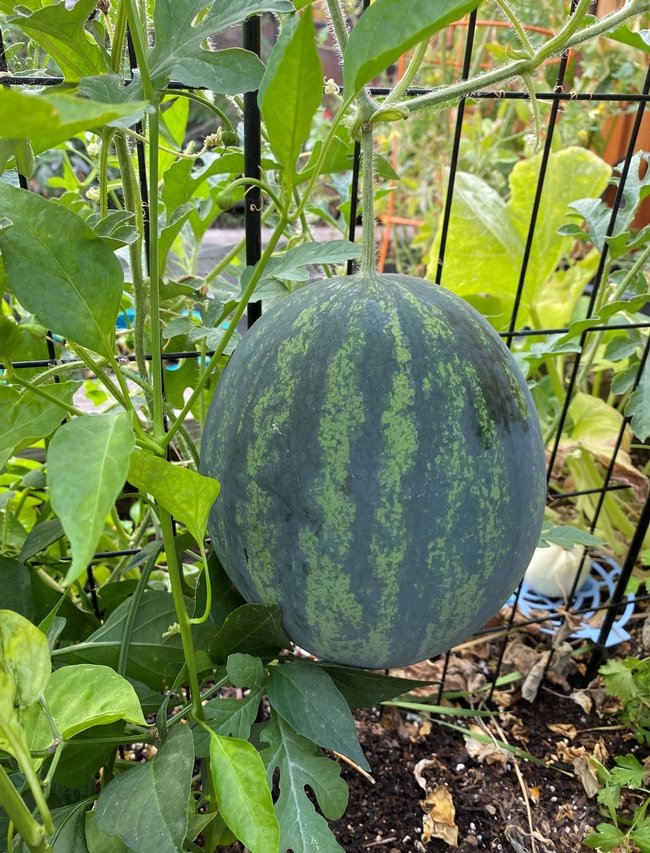