The public will benefit from the Bohart Museum of Entomology's UC Davis Crowd Fund, a $5000 fundraising drive that ends at 11:59 a.m. on Sunday, Oct. 31.

The Bohart Museum, which is celebrating its 75th anniversary this year, originated in 1946 when noted entomologist Richard M. Bohart (1913-2007), UC Davis professor of entomology, filled two Schmitt boxes with insect specimens. That was the beginning of the UC Davis insect museum. Named the Bohart Museum in 1982, it is now the home of nearly eight million insect specimens, collected worldwide

Lynn Kimsey, director of the Bohart and a UC Davis distinguished professor of entomology, drew praise last Saturday at the museum's 75h anniversary party, hosted by the Bohart Museum Society.

Emcee Jason Bond, the Evert and Marion Schlinger Endowed Chair and professor, UC Davis Department of Entomology and Nematology, and the newly named Associate Dean for Research and Outreach for Agricultural Sciences, UC Davis College of Agricultural and Environmental Sciences, urged the crowd to help support the outreach mission of the museum.

The need to update and expand the Bohart Museum's traveling display is urgent, the scientists said.

“We have all these bright, students on campus with fresh and diverse perspectives," commented Tabatha Yang, the Bohart Museum's education and outreach coordinator. "We want to support their talent, so the funds we are raising will go to students for the creation of new traveling displays. This fleet of new educational drawers will expand and update what we can offer. Some of our current displays were created 15 years ago! One can only imagine all the places these drawers have been and all the people who have been inspired."

The Bohart Museum, currently closed to the public due to COVID-19 precautions, is located in Room 1124 of the Academic Surge Building on Crocker Lane, UC Davis campus. In addition to its insect collection, which is the seventh largest in North America, the museum houses a live “petting zoo,” comprised of Madagascar hissing cockroaches, stick insects and tarantulas, and a gift shop (now online), stocked with insect-themed t-shirts, hoodies, jewelry, books, posters and other items. Further information is on the website at https://bohart.ucdavis.edu. 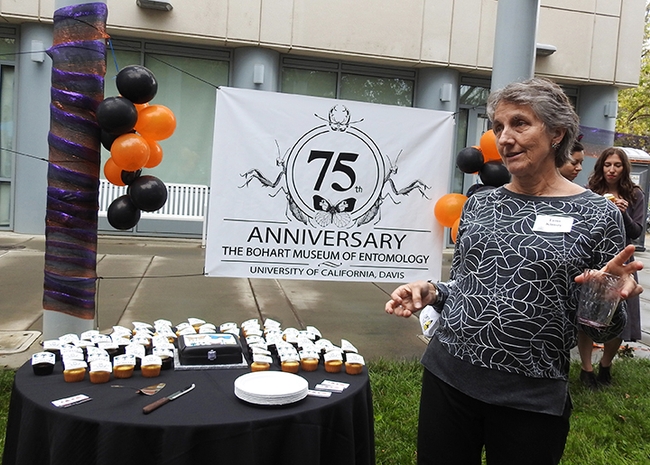 Lynn Kimsey, director of the Bohart Museum of Entomology and a UC Davis distinguished professor of entomology, addresses the crowd at the 75th anniversary party hosted last Saturday by the Bohart Museum Society. (Photo by Kathy Keatley Garvey) 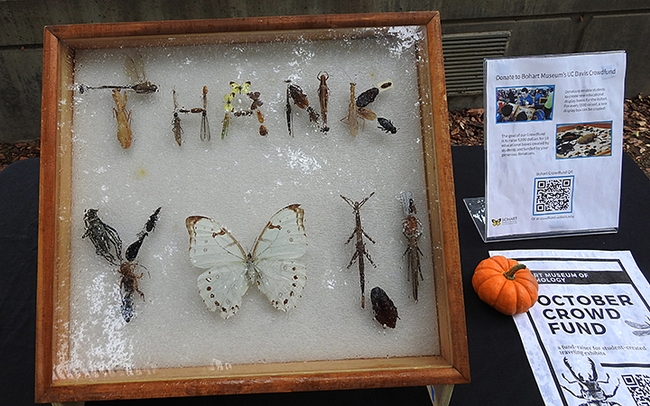 In appreciation of the donations, the Bohart staff created this "Thank you." Donations for the Bohart Museum's traveling insect-specimen display case end at 11:59, Oct. 31. (Photo by Kathy Keatley Garvey) 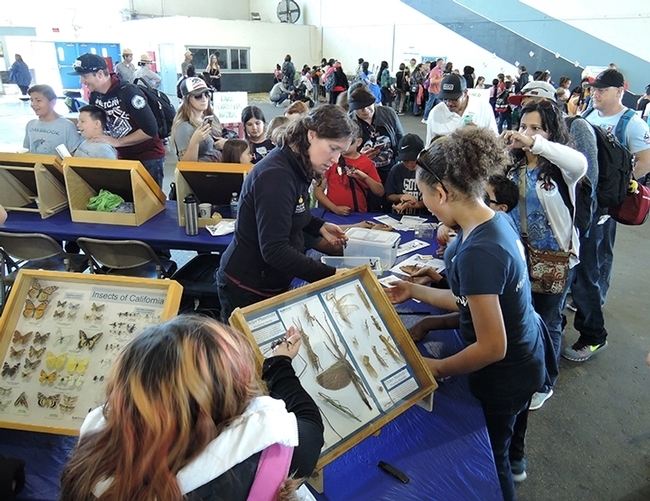