New paradigms for crop production are being tested in what has now evolved to be the fifth straight year of research by Fresno State researchers on the use of a roller crimper to kill winter cover crops ahead of spring-planted silage corn.

In a campus field at the northeast corner of the intersection of Bullard and Cedar Avenues, under the direction of Dr. Anil Shrestha, Chair of FSU's Department of Viticulture and Enology, and with Robert Willmott, the project's field director, a series of different winter cover crop species and mixtures have recently been seeded under the University's center pivot irrigation system and will be grown with largely winter rainfall through March of 2022.  The cover crops will then be evaluated in terms of the ability to kill them using a roller-crimper implement and without herbicide.

Shrestha and Willmott have been in the trenches with the pioneering evaluations and now have four years of experience with the system under their belts.  At first, the whole thing was a novelty with many open questions, but the team's recent successes in killing the cover crops have buoyed them with the confidence and hope that they may well be onto something with the production approach.

Both Fresno State researchers are part of a larger effort that is exploring techniques for growing crops organically with less overall soil disturbance.  The "CIG Project," as it has been called, involves several experienced organic vegetable farmers throughout the State who have farm-based studies also underway in Hollister, Guinda, and Meridian, CA.  The work being conducted at Fresno State is an important part of this overall effort and has made very interesting progress toward reducing soil disturbance while protecting the soil surface with residues - important principles of soil health management systems.

Tours of the site are available by contacting Dr. Anil Shrestha at ashrestha@mail.fresnostate.edu 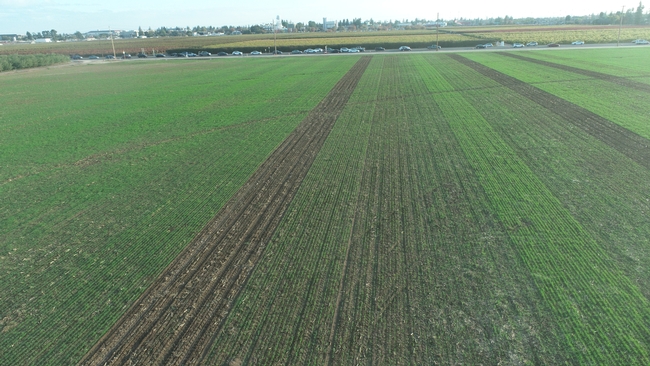