A Tincture of Time

Twenty years ago, when I was a brand-new Master Gardener, I was sometimes intimidated by the veteran Master Gardeners.  They seemed so knowledgeable and would bring in armloads of cuttings from their perennials and shrubs.  Their heavenly bamboo, Nandina domestica, would be lush, with berry clusters the size of a child's head.  Their Aeonium were gigantic.  I could only imagine what the mother plants at their homes must look like. I would go home and look at my relatively young plantings and sigh.  What secrets must these veterans have? Special fertilizers? Special watering schedules?  Had I placed mine in the wrong spot? Gotten the wrong plants for my climate zone?

As I learned more in the program, I found that some of the size differences were due to using different varieties.  The Aeonium genus is a good example of this, with marked size differences between its members. But other times, I found that we were growing the same varieties of a plant with widely different results.  It still hadn't dawned on me what was going on. Now in my defense, I have to tell you that I was a military brat growing up, and moved very frequently. I had never really experienced the maturing of a landscape.  Not being totally blind, I did know that trees got larger as they got older but I honestly had never thought about perennials or shrubs.

Some of these plants are relatively short-lived and become woody as they get older.  Good examples would be Lavender and Hebe.  When they get to this woody state they are generally replaced.  In fact, we recently removed our Hebe shrubs from under our front window because they had gotten so woody, and their blooms had diminished.

Others, though, continue to be lovely as they age and get larger.  Heavenly bamboo, Nandina domestica, is an example of this.  It is not a bamboo, but a flowering shrub native to East Asia.  I have the Gulfstream variety that has finally grown into its full-grown, three and a half feet tall by three feet wide, state.  It just took twenty years to do it.  Aaah, that's what it needed, a tincture of time. 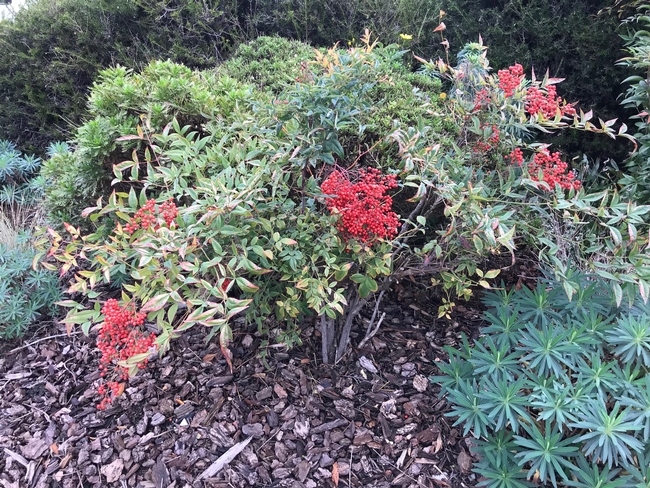