A winter pollinator garden does not buzz with bees; it crawls with earwigs, ants, roly-polys, and other insects.

Turn over a rock, a pot, or a garden sculpture and there they are.

Well, there one was.

An earwig looked up as we lifted a garden sculpture. (Initially identified later as a European earwig, Forficula auricularia, order Dermaptera but it may be another species.)

European earwigs are invasive. Look at the damage they do to citrus. You've also probably found them in an ear of corn, a nectarine or a pomegranate.

"Although this is the most abundant earwig in California, it was not known to the state until 1923," according to the book, California Insects, co-authored by Jerry Powell and Charles Hogue. "The immatures and adults feed on a wide variety of substances, from flowers and green foliage near the ground to living and dead insects, including aphids."

Earwigs are readily recognizable by their cerci or pincers. They look like nature's forceps or pliers.

Or as the UC Statewide Integrated Pest Management Program says: "The adult earwig is readily identified by a pair of prominent appendages that resemble forceps at the tail end of its body. Used for defense, the forceps are somewhat curved in the male but straighter in the female. Although earwigs can devastate seedling vegetables or annual flowers and often seriously damage maturing soft fruit or corn silks, they also have a beneficial role in the landscape and have been shown to be important predators of aphids."

UC IPM goes on to say: "European earwigs feed on a variety of dead and living organisms, including insects, mites, and growing shoots of plants. They are voracious feeders on soft-bodied insects such as aphids and insect eggs and can exert significant biological control under some circumstances. In yards that are planted to turf and contain mature ornamental plants, damage by earwigs is unlikely to be of concern."

"European earwigs can cause substantial damage to seedling plants and soft fruit as well as to sweet corn. Damaged seedlings may be missing all or parts of their leaves and stem. Leaves on older plants, including fruit trees, have numerous irregular holes or are chewed around the edges. This damage may resemble that caused by caterpillars. Look for webbing, frass (excrement), or pupae that would indicate the presence of caterpillars."

"Earwigs may attack soft fruit such as apricots, strawberries, raspberries, or blackberries but don't harm hard fruit such as apples. On stone fruit, look for shallow gouges or holes that extend deeply into the fruit. On strawberries, distinguish earwig damage from that of snails and slugs by checking for the slime trails snails and slugs leave behind. On corn, earwigs feed on silks and prevent pollination, causing poor kernel development. Earwigs may also seriously damage flowers including zinnias, marigolds, and dahlias. To confirm that earwigs are causing the damage, go out at night with a flashlight to observe the pests in action."

In her newly published book, Garden Allies: The Insects, Birds and Other Animals That Keep Your Garden Beautiful and Thriving, author Frédérique Lavoipierre acknowledges their presence as "ominivores, detritivores and predators." In large numbers, however, they can be pests. "A neighbor uses empty cat-food cans baited with a dab of soy sauce and some cooking oil; they come for the soy sauce and get mired in the oil."

UC IPM points out that bacon grease or fish oil will attract them and vegetable oil will trap them.

But back to my sole earwig. What, no image of a bee? No butterfly? No dragonfly? Sorry, it's winter. I must be desperate for insect activity in the winter to stop, look, and photograph an earwig! Plus, nobody I know "takes portraits" of them.

Maybe it's the "yecch" factor as to why we rarely see photographers capturing images of these insects. The old wives' tail of associating earwigs with finding shelter in human ears still lurks. Also, there's that "movement factor":  slow-moving photographers vs. fast-moving earwigs. Earwigs don't move at a snail's pace because they are not snails!

"A big fat earwig is very tasty,' Grandma said, licking her lips. 'But you've got to be very quick, my dear, when you put one of those in your mouth. It has a pair of sharp nippers on its back end and if it grabs your tongue with those, it never lets go. So you've got to bite the earwig first, chop chop, before it bites you."

It "bites" you? Pinches! 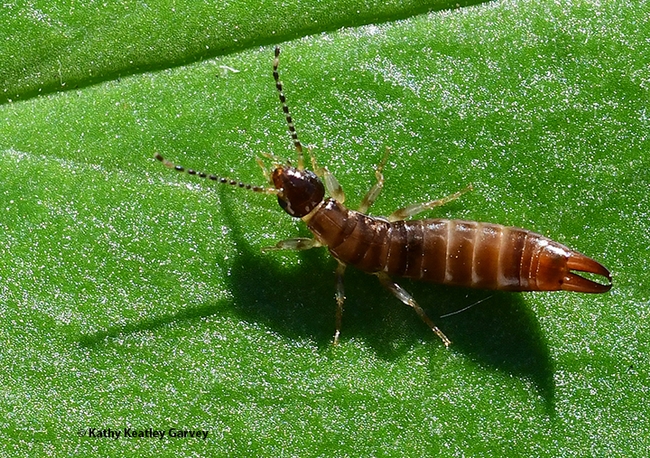