A blog re-post from our Lead Scientist Dr. Cameron Barrows on the importance of preserving those organisms that are at the core of each ecosystem, using Joshua Trees (Yucca brevifolia) as an example. “We should preserve every scrap of biodiversity as priceless while we learn to use it and come to understand what it means to humanity.” – E.O. Wilson

“Important” is a word we use to indicate something has value. The problem with “important” as an adjective within a context of science or natural history is that the value being ascribed to that something is subjective, that value is in the eyes of the beholder, and has no context with regard to a comparison with other “somethings”. I was recently asked to describe the ecological importance of Joshua trees and realized that if I stuck to that criteria how subjective that description would be, and as such, not terribly valuable. Were Joshua trees more or less ecologically important than creosote bushes or ironwood trees? I decided to redefine my assignment and ask the question of what would change if Joshua trees were suddenly gone? This is where a solid framework in natural history is essential. Imagining the changes wrought if a species was suddenly absent, plucked from the landscape within which it occurs, requires understanding what interrelationships that species has with other species, and how strong or essential those interrelationships are.

To understand what would change if a species suddenly disappeared, I first imagine that species as the hub of a wheel, with connections to other species as spokes of that wheel. Think about the “experiment” European colonists have been engaged ever since their arrival in North America: the elimination of wolves and coyotes from the North American landscape. If wolves and coyotes are at the hub my wheel, the spokes are the many prey species the wolves and coyotes eat. Remove wolves and coyotes and all those prey items become more abundant. If all those prey species become more abundant, the plants they eat become less abundant. Some of those plants are important to songbirds, so songbirds become less abundant. Some of those plants might be important to humans, the crops we eat or what our livestock eat, and so our food supply might become at risk. The superabundance of those prey species may only be temporary since their populations will grow until they reach a limit in their food supply, then starvation and disease will limit their growth. However, before then, the lack of plants could lead to higher rates of soil erosion and limit vegetation recovery. All these outcomes have already happened. Perhaps our experiment was not such a good idea.

Putting Joshua trees at the hub of a species wheel, the spokes are the multitude of species that use or depend on these Mojave Desert icons. One is the Joshua tree's primary pollinator a diminutive moth, Tegeticula antithetica, and another is a beetle, Sycophorus yuccae. Lose the Joshua tree and one or both of these insect species may go extinct. The beetle's larvae burrow into the stems and trunks of Joshua trees, which may not be ideal for the Joshua trees, but those larvae are important food for ladder-backed woodpeckers. Lose the Joshua tree and the woodpeckers may abandon the Mojave Desert. There is a long list of other birds, that while all may not depend solely on Joshua trees, their abundance in the Mojave Desert is closely tied to healthy stands of this tree yucca. Scott's orioles, ash-throated flycatchers, cactus wrens (yes, they often nest in cactus, but where cactus are scarce, they use Joshua trees), western screech owls (reusing ladder-backed woodpecker excavated holes), house finches, phainopeplas, loggerheaded shrikes, great-horned owls, ravens, and red-tailed hawks are all obligate or prefer to be tree nesters, and Joshua trees are often the only trees for hundreds of square miles across the Mojave Desert. Lose the Joshua trees and the dawn chorus of birds becomes much quieter. Western fence lizards and desert spiny lizards can be common on rock outcrops and cliff faces, but when boulders are not available both lizards readily occupy Joshua trees and thrive there. Desert night lizards are abundant (at times) living in extended family groups beneath the fallen branches of living Joshua trees, the Joshua trees and their branches providing a cooler-moister microclimate than would otherwise be available and creating a small food web between termites eating decaying cellulose, the night lizards eating the termites, and desert night snakes eating the tiny lizards. I count at least 17 spokes in the wheel surrounding Joshua trees, without even beginning to address the below-ground systems of mycorrhizal fungi and other soil organisms.  Another way to characterize this hub and spoke model is as a keystone. Remove the keystone from a stone arch then the arch falls. Remove Joshua trees and the abundance of many Mojave Desert species is reduced or lost altogether.

Joshua trees are sensitive to temperature and aridity, and so climate change represents a real threat to their occurrence within much of their existing distribution. Large swaths of Joshua trees already are showing no signs of successful reproduction, no young seedlings are to be found. For non-naturalists, the still standing forests of only adult trees provide a false perception that all is well, but those standing trees germinated under a very different climate than the one their potential offspring currently face. There are higher elevation populations that are more resistant to climate change, and where seedlings are common, at least so far. Still, those higher elevation populations (as well as those at lower elevations) are also at risk from wildfire which, in deserts where fire was previously exceedingly rare, natural selection has not provided the tools to survive such events.

What would happen if we imagined creosote bushes suddenly disappeared? There are as many as 60 insects associated with creosote bush, including 22 species of bees that feed only on its flowers. Long-tailed brush lizards are most commonly found hiding in the branches of creosotes bushes, and desert iguanas are particularly fond of eating their flowers. Desert tortoises often dig their burrows below these shrubs and rest in the shade offered by creosote bushes. Black-throated sparrows and black-tailed gnatcatchers will nest in the branches of these desert-ubiquitous shrubs. Creosote bushes appear more resilient to the effects of climate change than are Joshua trees. That said, most (not all) of the recruitment I am seeing is happening at higher elevations. At least 65 above ground spokes extend from the creosote bush hub. However, comparing Joshua trees to creosote bushes is no more valid than comparing apples to oranges as they do not share any “spokes”, each encompasses a distinct array of species. One is no “more important” than the other. Rather, these numbers emphasize and underline the often-unappreciated richness and diversity of California's deserts. The numbers also emphasize what may be lost or diminished if these “hubs” are lost. Our deserts are not barren wastelands. That is the important take-home message.

Go outside, tip your hat to a chuckwalla (and a cactus), think like a mountain, and be safe. 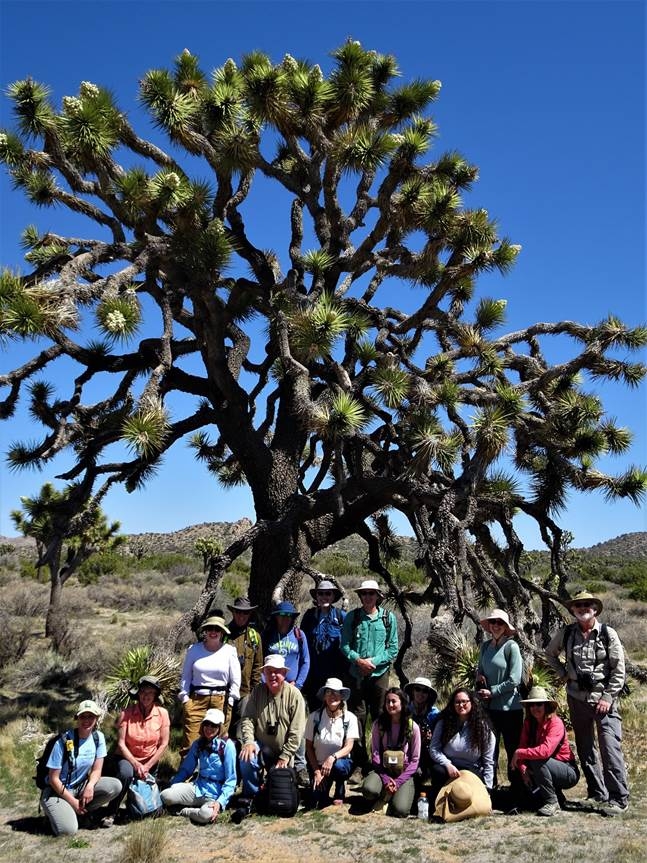