A monarch egg. (Photo by Kathy Keatley Garvey)
It was a good news/bad news/sad news kind of day on July 21 when the International Union for Conservation of Nature (IUCN)  announced that the migratory monarch butterfly (Danaus plexippus) is now on its "Red List of Threatened Species as Endangered--threatened by habitat destruction and climate change."

The good news? That the iconic monarch landed on the Red List, which means opening safeguards to protect it.

The bad news? Being on the list means that it's closer to extinction. The other bad news? The U.S. Fish and Wildlife Service, has not yet listed it as endangered or threatened, only that it's a candidate for its list of endangered and threatened wildlife.

IUCN, the global network conservation authority based in Switzerland, is comprised of more than 1,400 member organizations, with input from some 15,000 experts.

Percentages punctuate the story of the declining monarch population. "The western population is at greatest risk of extinction, having declined by an estimated 99.9%, from as many as 10 million to 1,914 butterflies between the 1980s and 2021," according to the IUCN news release. "The larger eastern population also shrunk by 84% from 1996 to 2014. Concern remains as to whether enough butterflies survive to maintain the populations and prevent extinction."

IUCN fittingly called attention to climate change, pointing out that "climate change has significantly impacted the migratory monarch butterfly and is a fast-growing threat; drought limits the growth of milkweed and increases the frequency of catastrophic wildfires, temperature extremes trigger earlier migrations before milkweed is available, while severe weather has killed millions of butterflies."

So here we are, our favorite butterfly "teetering on the edge of collapse," as IUCN monarch butterfly assessment leader Anna Walker so accurately put it.  Yet, Walker, a member of the IUCN Species Survival Commission's Butterfly and Moth Specialist Group and Species Survival Officer at the New Mexico BioPark Society, sees signs of hope, as people and organizations come together to try to protect the monarch and its habitats.

Meanwhile, have you seen any monarchs lately?

You can participate in the sixth annual International Monarch Monitoring Blitz, set from July 29 to Aug. 7.  You're invited to look for milkweed plants and report their observations of monarchs (eggs. caterpillars, chrysalids and adults) to Journey North:

Over the last several years, we've seen dozens of monarchs in our family's pollinator garden in Vacaville. In 2020, we observed some 300 eggs and caterpillars. So far this year: Zero, zip, nada.

Let's hope that the monarch doesn't go the way of Franklin's bumble bee, the bee that Robbin Thorp (1933-2019), a UC Davis distinguished emeritus professor of entomology, monitored for decades in its small range of southern Oregon and northern California. He was instrumental in placing the bumble bee, Bombus franklini. on the IUCN Red List of Threatened Species in 2008. He also worked to place it on the U.S. Fish and Wildlife Service's Endangered Species List, which occurred in 2021.

Thorp, the last known person to see Franklin's bumble bee in its native habitat, spotted it in 2006 near Mt. Ashland. The bee inhabits--or did--a 13,300-square-mile area confined to five counties--Siskiyou and Trinity counties in California; and Jackson, Douglas and Josephine counties in Oregon. Every year biologists, citizen scientists, volunteers, landowners and students form a search party to look for it. This year more than 70 people participated. Sadly, it's feared extinct. 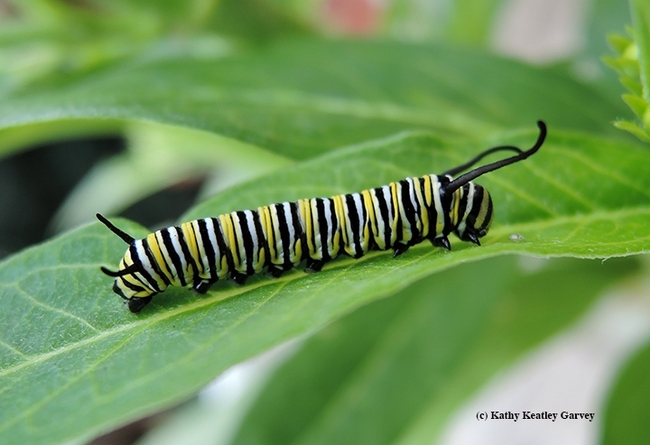 A monarch caterpillar munching away on its host plant, milkweed, in a Vacaville, Calif., garden. (Photo by Kathy Keatley Garvey) 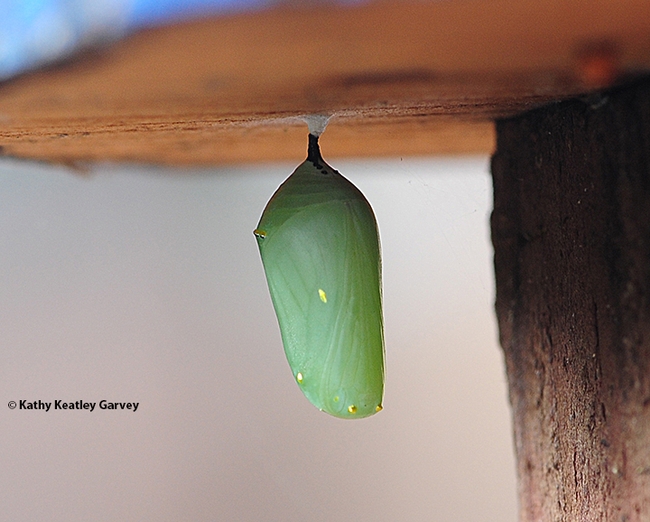 A monarch chrysalis attached to the underside of a bird feeder. (Photo by Kathy Keatley Garvey) 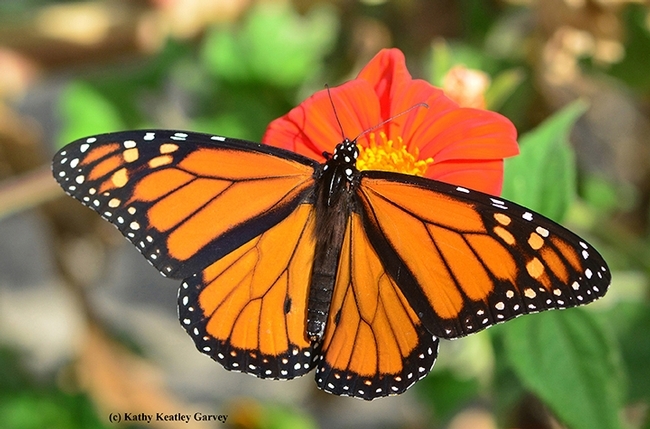 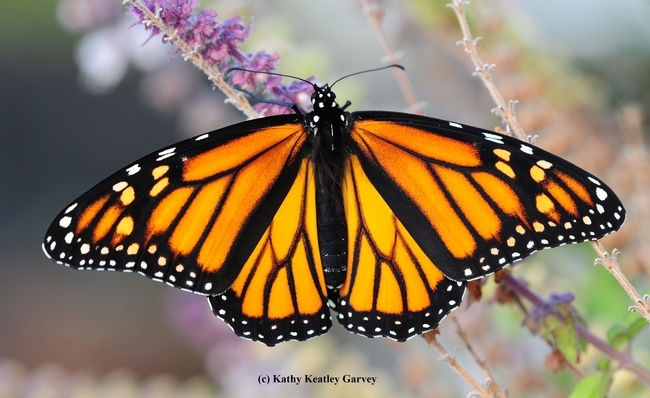