The event, held from 8 p.m. to 11 p.m., Saturday July 30 in Room 1124 of the Academic Surge Building on Crocker Lane, UC Davis, drew a record crowd of more than 400, the highest ever for a non-UC Davis Picnic Day open house at the Bohart.

Visitors marveled at the worldwide collection of moths, watched lepidoptera curator Jeff Smith spread the wings of a moth, and asked dozens of questions of Bohart associate Greg Kareofelas, who was staffing the lepidoptera collection while Smith demonstrated the art of spreading moth wings. Outside, a blacklighting demonstration display drew inquisitive visitors but not many moths and other flying insects.

After a two-year hiatus due to the COVID pandemic, "how great it was to have the doors open again for the public," said Smith. (See news story)

It was also a great idea to implement a sidewalk art chalk session outside the entrance. The art included "Moth Night" signage, a Luna moth, a tiger moth, and assorted other critters--and even a soccer field and player. A tiger moth, the work of UC Davis master's student Srdan Tunic. (Photo by Srdan Tunic)
“People could draw whatever they wanted in chalk, but there were a lot of moths, although my kids went rogue and drew a soccer field and a figure,” said Tabatha Yang, the Bohart Museum education and outreach coordinator.

Srdan Tunic of UC Davis, a second-year master's degree student in art history, created the intricate tiger moth.  Skilled in street art and in academics (his Linked In profile indicates "Curating: creating bridges between art and people, ideas and objects"), Tunic is the co-founder, researcher and guide of Street Art Walks Belgrade, where he conducts lectures and tours on street art, graffiti, and the history of Belgrade.  He holds a bachelor of arts degree (2008) in art history from the University of Belgrade, Serbia, and a master of arts in cultural policy and management (2017) from the University of Arts, Belgrade. He expects to receive his master's degree in art history from UC Davis in May of 2023. Toco Yang waves to the photographer as he works on his chalk drawing. (Photo by Tabatha Yang)
Visitors watched in awe as UC Davis students Francisco Basso and Kyle Elshoff worked on a chalk drawing of a Luna moth (Actias luna), also known as the American moon moth. It's one of the largest moths in North America, with a wingspan that can range from 4.5 inches to 7 inches. That's not all that it's known for. Wikipedia tells us "As defense mechanisms, larvae emit clicks as a warning and can also regurgitate intestinal contents, confirmed as having a deterrent effect on a variety of predators. ]The elongated tails of the hindwings are thought to confuse the echolocation detection used by predatory bats. A parasitic fly deliberately introduced to North America to be a biological control for the invasive species spongy moth appears to have had a negative impact on Luna moths and other native moths." 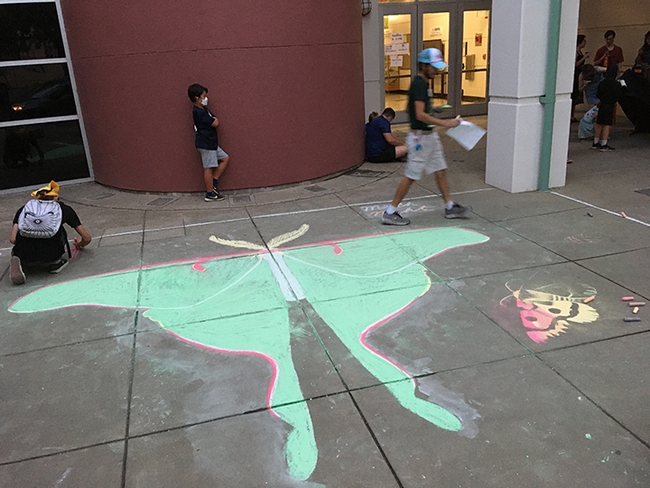 Chalk art of a Luna moth graced the entrance to the Bohart Museum of Entomology at UC Davis on Moth Night. (Photo by Tabatha Yang) 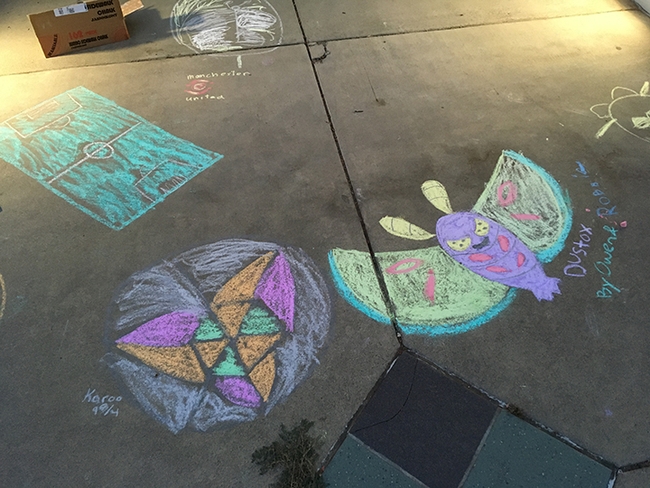 A few of the colorful moths depicted in chalk in front of the Bohart Museum of Entomology. (Photo by Tabatha Yang) 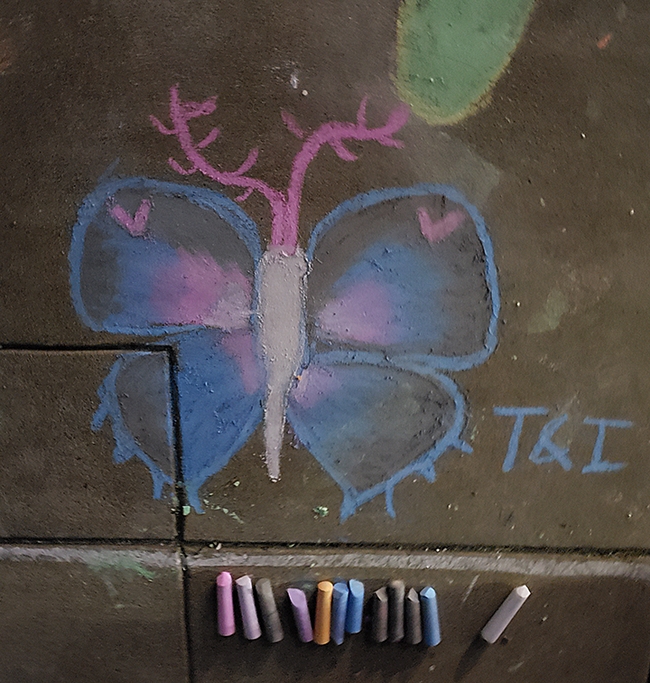 A chalk artist made his/her mark in front of the Bohart Museum of Entomology. (Photo by Tabatha Yang) 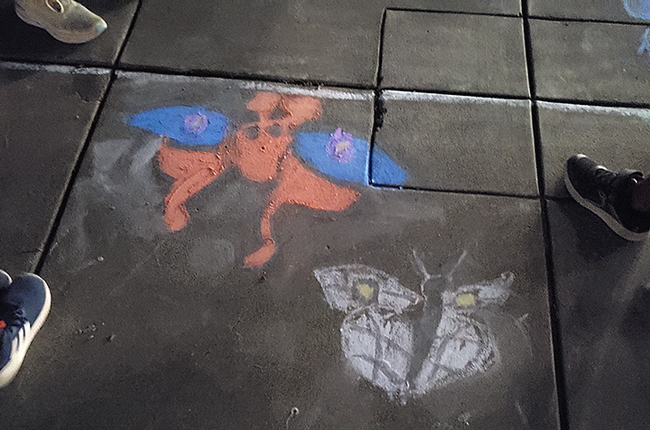