This year our Road trip took us north. We decided to see the national parks in Washington state, so here we are.

1st stop was Mt. St.Helens. I remember watching the 1980 eruption on TV and then again in 2004. The lava/magma flow continued until 2008. The 1980 eruption changed theToutle River Valley, and the devastating effects are still apparent. The long drive up to the viewing center has several interesting stops along the way. My favorite was the Forest Learning Center. It is sponsored byWeyerhaeuser, who we know to be big into forestry and logging. They immediately started replanting and experimenting with the best ways to get the little trees to survive. They started replanting hillsides pretty quickly. They also only cut down 2% of the trees at a time. I'm so naive that my mind went to "tree #3 and #42, today's your day." But they cut large areas and replanting goes on in stages so you can see all sizes of trees as you go by. They also put dates up of when sections were replanted. Our next stop was Mt. Rainier. It's 14,410 feet in elevation and remains a dormant volcano for now. The glaciers are still visible but are retracting due to climate change. It was the 5th assigned national park and the 1st to allow automobile traffic. The park was designed and engineered to be a visual experience using only rocks and timber from within the park. It is truly magnificent. Mt Rainier is also a designated landmark because of this. Continuing, we headed over to Olympic National Park. It is nearly 1MILLION acres! FDR declared it a national park in 1938 then more was added in 1953. Today it is also a designated Biosphere Reserve and World Heritage site. It is home to several plants and animal species not found anywhere else in the world. The western side of the park is a temperate rain forest getting over 100 inches of rain each year. The mountains block the clouds from getting to the east side, so the east side is dependent on the snow runoff to feed the lakes and rivers.

Since we were so close, we took a day trip on the ferry to Vancouver Island and visited the Butchart Gardens. All I can say is WOW! If you haven't been there, it is simply amazing. I'm very glad that I don't have to deadhead the roses in the amazing rose garden. There are roses from all over the world, all labeled with their name and the year that they were brought in.

Back on the road again, we headed to North Cascades National Park. We cut hours off the drive by putting the RV and car on the ferry and riding across Puget Sound. I was amazed at how many vehicles fit on the ferry. We were parked by 2 SEMIS! This was a deceiving area. At 1st, we thought there would be nothing to do, but boy, we were wrong. A server at 1 place we ate recommended that we go for an evening hike at a place called Seattle City Lights. This is where the waterfall comes down to the hydroelectric generation plant. They have made a nice garden walk to a little bridge with color-changing lights. Very, VERY cool. Then there was a very short nature walk that described the life cycle of the forest. Did you know that dead or dying upright trees are called "Snags"? I surely didn't. They are very important to the entire ecosystem as they decompose. Once they fall and new growth begins, they make the forest look as though it is growing in straight lines. We finally made it over to the park. North Cascades is the least visited of all the national parks. It is a designated area for the protection and re-population of grizzly bears and forest conservation.

Our next stop is Glacier. I'll save that for later on. 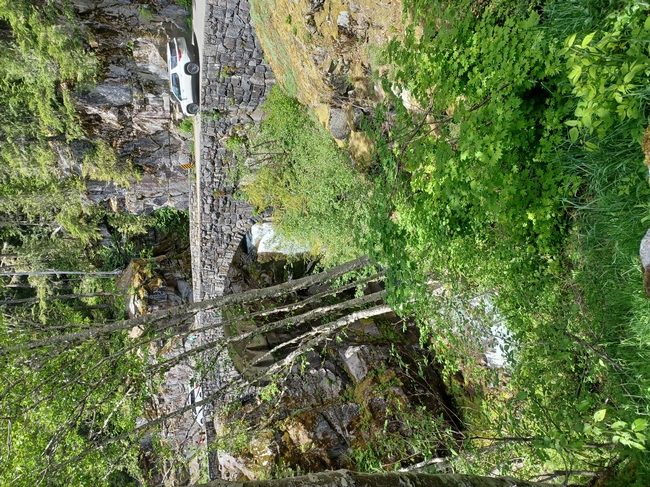