It is at times perhaps tempting to take an uncomplicated view of nutrient deficiency in strawberry.  The mantra goes a little bit like yellow leaves are nitrogen deficient, phosphorous deficiency is given by purple leaves, potassium shortages easily marked by scorched leaves and so on.

I don’t believe any of this is so simple and so attempt to challenge this facile thinking when I have the opportunity to do so.

The following situation was a good one.  A smallish field of ‘Albion’ variety strawberry was not given supplemental fertilizer beyond a standard dose of preplant slow release 18-8-13 in the area of 500 lbs per acre.  The result in late June was as seen below- severely chlorotic plants with a strong tendency towards purpling of the middle age to older leaves.  Additionally, flower production had nearly ceased and fruit was sizing down substantially.

I tested the soil to 6 “down at six different points throughout the field, amalgamated them and got the following results:

Soil pH was a perfectly normal 6.4.  As one can see from the numbers above, plant available nitrogen sources nitrate and ammonium were sort of low (usually want to be 10 ppm for either one), while phosphorous was a quite sufficient 58 ppm.

Tissue samples consisted of leaf blades.  Four separate samples were taken from different sections of the field and each sample consisted of a dozen leaflets of middle age- meaning not the very old ones at the bottom of the plant nor the young tender leaves emerging from the center of the crown.

Comparing the nitrogen results from the leaf blade with the 2.6-2.8% concentrations described as sufficient as from UC Publication 4098 and Dr. Tim Hartz’s work last year, we see that this vital nutrient is a full percentage point below what is deemed necessary for normal production.  Phosphorous, while below the 0.36% field average taken by Dr. Hartz’s study last year, is still understood to be well above the 0.10 % baseline given by UC Publication 4098.  All other nutrients, with the exception of zinc (15 ppm compared to a recommended 18-20 ppm), in this sample are well within sufficiency ranges.

Why then the pronounced purpling of the leaves if the phosphorous is not dramatically, if at all, insufficient in the tissue?  There are in fact other possibilities.  A lack of nitrogen, which is a component of some amino acids and other compounds, can result in a similar build up of excess carbohydrates as in phosphorous deficiency.   Essentially, both deficiencies have the same result then that these carbohydrates can end up being used in anthocyanin synthesis resulting in accumulation of these flavonoid pigments.  Some are red, others pink and some purple.  This may be an explanation why strawberry leaves lacking in nitrogen but not ostensibly lacking in phosphorous are actually turning red to purple.

So, while undoubtedly light green to yellow leaves are still a good indication of nitrogen deficiency in strawberry, don't be fooled that the purple that often accompanies it is actually caused by something else like a lack of phosphorous.

Thank you to Soil Control Lab in Watsonville for processing and evaluating these samples. 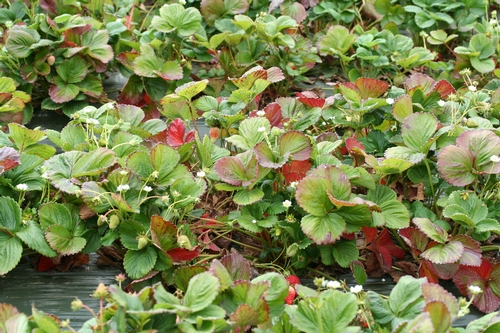 Overview of field of 'Albion' strawberry with major nitrogen deficiency. 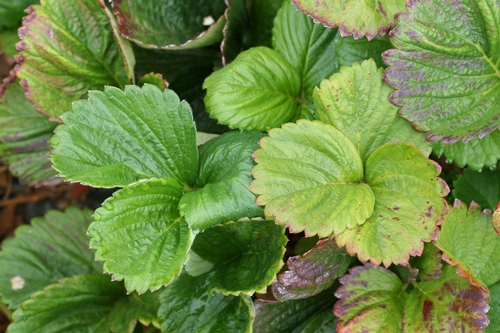 Light green to yellow leaves common to nitrogen deficiency. Note how the younger leaves are still quite green from N mobilized from older leaves. Note strong reds and purples mixed in with yellow to light green leaves. It's all nitrogen deficiency, and now we have a good idea why.
Tags: deficiency (1), nitrogen (17), phosphorous (8), strawberry (74)
Comments: 6
Comments:
by Jim Stevenson
on July 28, 2011 at 11:01 AM
Interesting!
by Monika
on July 3, 2012 at 10:43 PM
Hello
My name is Monika. I'm the representative of Intermag, company based in Poland.
We are one the leading manufacturers of foliar fertilizers with application in agriculture and horticulture.
Currently we are working on nutriet quide for strawberries therefore I would like to ask you about help. Could please provide us some photos of nutrients deficiency symphtoms apear on this kind of plant?I would be gratefull for your help.

I'm looking forward to hearing from you soon.

Mark
by Tomss Villaman
on February 22, 2015 at 7:19 AM
Hi Mark, Thanks for your explanation on nutrients deficiency on strawberry undoubtelly foliar analysis and overall assesment are the best tools for proper indentifications of nutrients problems.I met you at the nasga conference early this month and to keep in touch and fallow your comments. Thanks.
by Jeanette Stehr-Green
on September 16, 2021 at 9:52 AM
Dear Dr. Bolda: I am a Master Gardener from Clallam County in Washington State. Your (relatively old) posting on nitrogen deficiency in strawberry plants caught our attention. We are trying to diagnose a problem in a potted dwarf blackberry ('Baby cakes') with the following findings:

Fine purplish/red stippling (little bitty spots) on leaves. Discoloration heaviest around the leaf margins. Spots seem to follow the veins. Discoloration is evident on the lower surface of leaf and seen primarily on older leaves on the canes. New growth less severely affected. Plants are not as vigorous as would be expected (number and height of primocanes). No signs of a causative agent are evident (fungal fruiting bodies, spores, exoskeletons, webbing) using a handheld magnifying glass.

Plants have been in large container (approximately 30 inches diameter) for two years. The plants have been well watered this season but were not fertilized due to a miscommunication.

Do caneberries evidence nitrogen deficiency similar to strawberries? Do you think this might be what we are dealing with? Sadly, given resources, we are unlikely to test soil or plant tissue for nutrients but must diagnose on observations and history.
I have saved photos of the problem to a One Drive folder and could share with you, if you are at all interested. (Given the date of the original posting, you might not be!) Thanks for an informative posting! Clallam County Master Gardeners
Reply by Mark Bolda
on September 16, 2021 at 4:35 PM
Hi Jeanette,
Thank you for the thorough description of your problem with the potted blackberry. Yes, for sure send me the pictures, but I think it has to do with being in the pot for one, and not being fertilized for a lengthy time for two.
Leave a Reply: