Bug Squad
sitenum=63
Happenings in the insect world
If It's Friday, It Must Be...

If it's Friday, it must be Friday Fly Day.

The calendar crawls slowly sometime, but its numbers do not lie.

It's Friday Fly Day, all right, which means it's a good day to post an image of a fly, this time a robber fly.

As kids, we used to play epic battles of "cops and robbers," but neither cops nor robbers visited our family farm in Washington state.

Never saw any robber flies, either.

Several years ago, however, we noticed a robber fly in our family's pollinator garden in Vacaville.

Scientists tell is that it's an aggressive predator known for its speed, strength, and power. The robber fly lies in wait and ambushes flying insects, including honey bees, syrphid flies,  grasshoppers, dragonflies, damsel flies and others--many larger than it is. It stabs its prey with its short, powerful proboscis, injects a paralyzing toxin that liquifies the insides, and then sucks out the content.

Probably not something you want to think about too much, right? (Check YouTube)

These insects, found throughout much of the world (there are more than 7000 species in the robber family Asilidae), can be as long as two inches and as short as 0.2 inches.

If you look on BugGuide.Net, you can see robber flies attacking other insects, including syrphids or flower flies.

It was the robber fly's bristly moustache, though, that fascinated us. Actually it's called a mystax, derived from the Greek mystakos, which mean "moustache" or "upper lip." Perhaps the mystax provides the robber fly with some head and face protection from stinging honey bees in their own version of "cops and robbers." 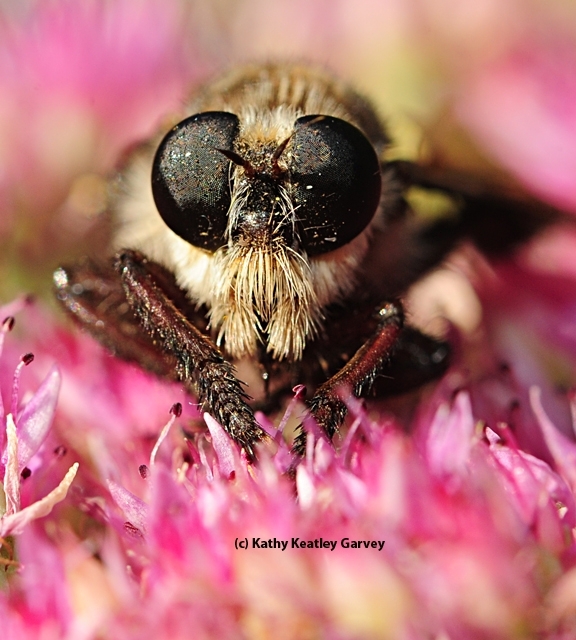 A robber fly peers at the camera. This is Mallophora sp., as identified by robber (assassin) fly expert Charlotte H. E. Alberts, a UC Davis doctoral candidate who studies these insects. (Photo by Kathy Keatley Garvey) 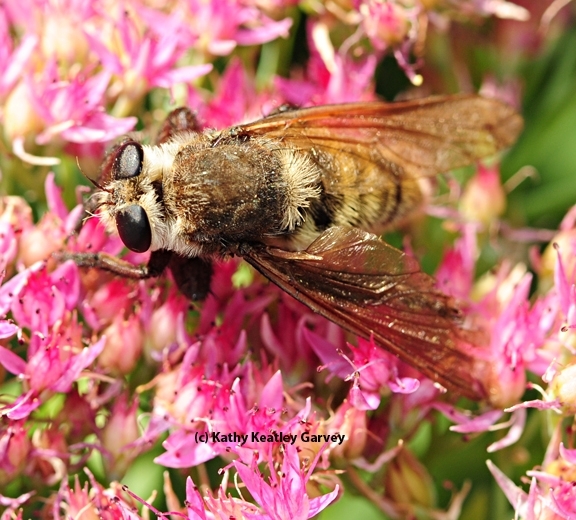