Figs are a popular fruit for home gardeners, and many wild figs are growing in California.

The fig tree produces what is a flower, not a true fruit. The study of fig pollination by a wasp known as Blastophaga psenes is a process that would be worthy of its own article. A diagram of the process can be viewed here:

Figs are propagated by cuttings, which produce a clone of the original plant, meaning it will have the same exact traits as the original plant.  When wild figs grow, they are the product of seeds being spread by birds and other wildlife and their traits are unpredictable.

Figs were grown commercially in California in the 19th century, but the crops were slowly phased out as farmers found that other crops were less labor intensive and other fruits were easier to ship. So as farmers removed figs and planted other crops, birds and other animals spread seeds, giving rise to wild figs of unpredictable flavors and traits.  These wild fig trees have actually given rise to a cultural phenomenon known as “fig frenzy” complete with fan conventions, online social media groups, and online forums for amateur growers. According to the March 2022 article in the Smithsonian Magazine entitled “In California, the Search for the Ultimate Wild Fig Heats Up” which sparked the idea for this blog article, there is fierce competition between “fig hunters” to find a wild fig that can be cultivated from cuttings and sold to other fig fanciers.  Some of the new fig varieties that fig hunters have “discovered” and named are 'Rainbow' due to its colorful nature and 'Jolly Rancher' after the candy by the same name, due to its intense sweetness. Some cuttings of these figs are sold via the online auction and the prices can be significant.

Not everyone considers wild figs to be beneficial since wild figs have become somewhat invasive.  They shade out native California plants and use up a lot of water in their preferred habitat. A local scientist, Katherine Holmes, a restoration ecologist for Solano Resource Conservation District is in charge of discovering and removing wild figs. She considers wild figs to be a dire threat to the wild riparian habitat of California, so much so that she thinks the situation is close to a “point of no return”.

If you want to know more about how to start growing figs or care for ones you have, UC ANR resources can advise how to choose the best fig for your area, how to grow and care for that fig, and what to expect in terms of the fruit crop, and how to prune your fig tree.

Personally, we have enjoyed a potted fig tree for several years now and have trained it into an espalier shape on a trellis by pruning and shaping and tying it when it was young.  This year has given us the most figs we have ever enjoyed, at least 2 dozen delicious, sweet figs of the Brown Turkey variety.

UC IPM provides resources on managing pests that may threaten your fig tree. 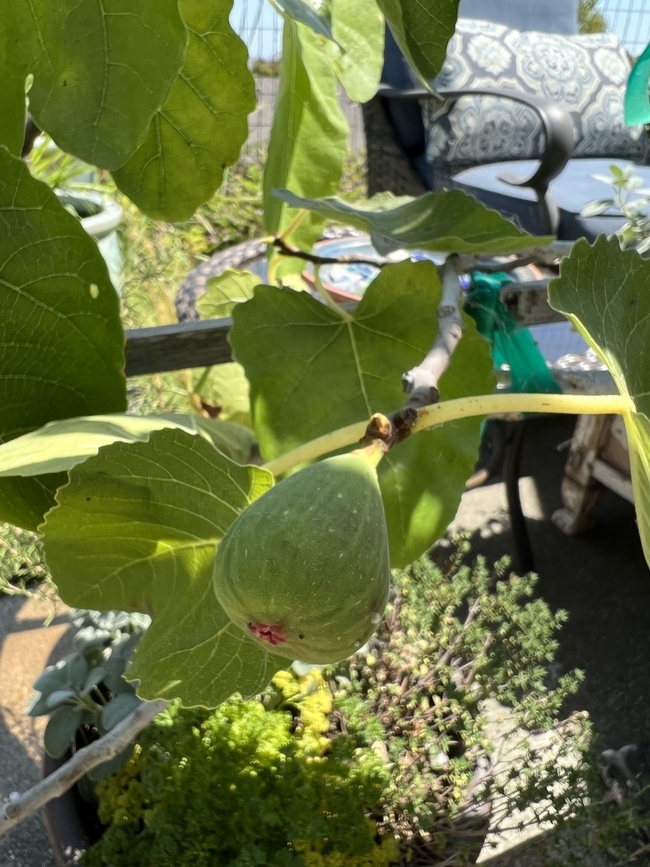 Our fig. photo by Kathy Craig
Comments: 2
Comments:
by Howard Fitzpatrick
on September 10, 2022 at 12:22 PM
We used to enjoy the figs from a tree in our back yard with the occasional surprise when picking a beauty to discover that a bird got there first on the back side. Once the invasive pest red squirrels appeared about 25 years ago, no more figs. They happily eat the figs green.
by Melissa Sandoval
on October 3, 2022 at 3:42 PM
I have long been a picker of wild figs. However all are not worth picking. One year my husband found a huge wild fig in the early summer and took me back to it at prime fig picking time. We followed several country roads, parked our car and hiked down the railroad tracks. My mouth was all set for delicious figs. When we got to the tree, not a fig was to be seen. Not one in any stag. And no downed ones either. After a bit of research I decided this wild fig was seeding that didn't come with a fruit/flower. So sad.
Thanks for your article, Kathy. I did not realize how damaging the wild ones were to our California wild lands.
Leave a Reply: