Honey bee in flight. (Photo by Kathy Keatley Garvey)
Not everybody loves honey bees. Indeed, about one percent of the population will go into anaphylactic shock if they're stung by a bee. That's a very small percentage--one percent--but it's huge if you're allergic to bees.

Other folks just don't want to be around them. Sure, they appreciate the pollination services and they worry about the declining bee population, but they don't want these tiny agricultural workers near them.

We received an inquiry last week from an Amador County resident who wanted a "bee catcher" to come and remove honey bees from his rosemary bushes.

Was this a swarm? No. No swarm.

Just a lot of bees visiting his yard.

Honey bees, however, are social insects. Every morning (unless it's too cold, or rainy or windy) foragers leave home to collect food (nectar and pollen) to bring back to their colony.

Honey bees survive as a unit, a sort of super unit or superorganism, not as individuals. Each has a task to perform. So you can't just catch foragers (which already have a home) and give them to another beekeeper. Guard bees will stop them at the entrance.

As Extension apiculturist Eric Mussen of the UC Davis Department of Entomology says: "At this time of year, foraging bees are leaving colonies all over the warmer states to forage for water, nectar, and pollen.  Certain plant blossoms are particularly attractive to honey bees, including rosemary.

"Despite the fact that you have many plants, thousands of blossoms, and hundreds of bees, the idea of capturing them and trying to integrate them into another colony is not likely to work.

"First, the colony from which they are originating would be suffering loss of valuable foragers.  Second, honey bees from different colonies do not tend to combine very easily.  They tend to fight."

"Finally, the queens in the colonies are laying around 1,000 eggs per day.  In three weeks, nearly 1,000 new worker bees will emerge, daily.  Later, the colonies will pump that up to 2,000 a day.  We cannot capture bees at that rate of increase.  It is best to let the healthy colonies build up quickly, then split the colonies in half (before they decide to swarm) and then have two colonies from one."

Bottom line: You should enjoy the bees in your yard, knowing "that because of the food you provide, one or more colonies are going to build up faster and provide extra bees that the beekeeper can use to increase colony numbers at the proper time of the season."

As for us, we look forward to spring and the return of blossoms, bees and butterflies. Especially the bees! 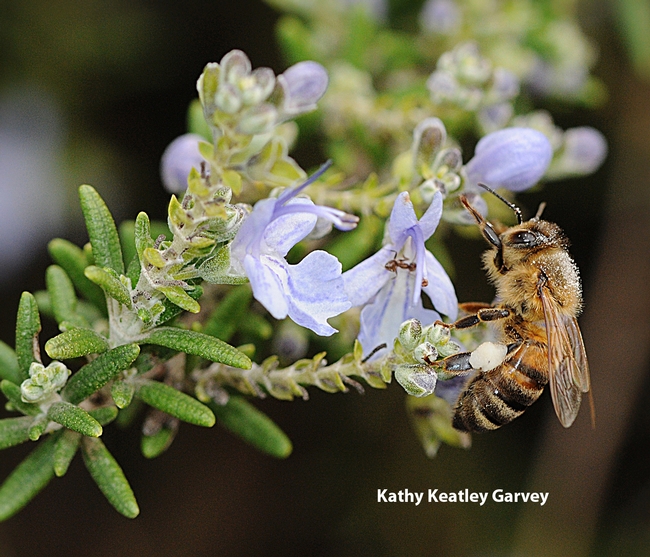