Bug Squad
sitenum=63
Happenings in the insect world
You're No Honey Bee!

Well, in the insect world, there's a fly that looks a lot like a honey bee, but it's no honey bee.

It's a drone fly (Eristallis tenax) from the family Syrphidae. It resembles a drone (male) honey bee.

UC Davis entomologist and emeritus professor Robbin Thorp of the Harry H. Laidlaw Jr. Honey Bee Research Facility, who does research on native pollinators, identified the drone fly below as a female.

The drone fly is brownish black with light yellow triangles at the base of the abdomen.

"It's sometimes called the 'H fly' for the pattern on the front of the abdomen," Thorp said.

So, what's the resemblance between a drone fly and a drone honey bees? The eyes. And the similar bullet-shaped bodies. "The eyes look quite a bit alike," agreed UC Davis apiculturist Eric Mussen.

However, the honey bee has four wings, and the drone fly, two. "But sometimes," Mussen said, "you don't notice the drone honey bee's other pair of wings."

There's no mistaking the larvae, though. They drone fly larvae are aquatic. They live in drainage ditches, sewage, and stagnant ponds or sluggish streams. Each little sausage-shaped larva has a long breathing tube which it extends to the surface for oxygen. It's known as a "rat-tailed maggot."

Did anybody say "Yecch?" Yecch!

Sometimes you'll see the rat-tailed maggots moving around in fresh cattle dung or, shall we say, moist excrement.

Did anybody say "Yecch?" Yecch!

When it's an adult, it visits flowers, like this drone fly did in the Storer Gardens during the recent UC Davis Arboretum Plant Faire. 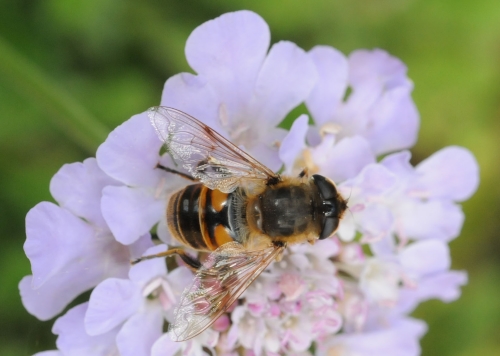 Drone fly
This drone fly, a female, is an Eristalis tenax from the Syrphidae family. It's sometimes called the "H Fly" for the pattern on its abdomen. (Photo by Kathy Keatley Garvey) 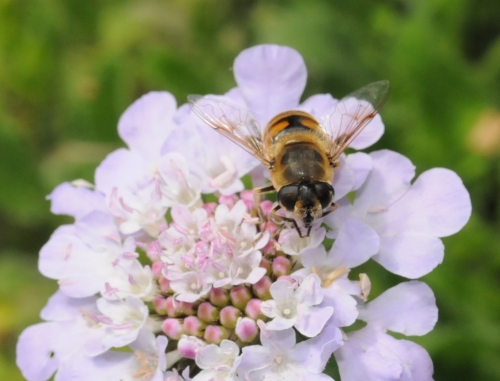 Drone fly eyes
The eyes of the drone fly (above) resemble that of a drone male honey bee. (Photo by Kathy Keatley Garvey)
Tags: drone fly (13), Eristalis tenax (11), rat-tailed maggots (1)
Comments: 1
Comments:
by Steven Gaylord
on November 4, 2013 at 5:41 PM
A (drone) fly. Never knew this. We used to catch them in Ontario California over 50 years ago. We couldn't differentiate them from the regular bees if it weren't for the distinctive "H" on its abdomen. Thanks...
Leave a Reply: