It was the first swarm of the season at the Harry H. Laidlaw Jr. Honey Bee Research Facility on Bee Biology Road, University of California, Davis.

The bees swirled, darkening the sky, and then swarmed from one of bee breeder-geneticist Susan Cobey's hives around 2 p.m. It was a sight to "bee-hold." At the onset, the bees looked quite confused, as if not knowing what to do. (Well, after all, they'd never done this before!) Most joined the queen in a cluster on a nearby tree branch. A few stragglers touched down on leaves.

Still others headed buzzed over to the empty hive that Cobey had strategically placed below the swarm.

The entire scenario reminded us what biologist Thomas Seeley of Cornell University said when he addressed two separate UC Davis crowds on Jan. 19 and Jan. 20.

Seeley, a professor in Cornell's Department of Neurobiology and Behavior (he teaches courses on animal behavior and researches the functional organization of honey bee colonies), outlined what bees do when they swarm.

They do it, he said, through "swarm intelligence, the solving of a cognitive problem by two or more individuals who independently collect information and process it through social interactions."

"With the right organization, a group can overcome the cognitive limitations of its members and achieve a high collective IQ.   To understand how to endow groups with swarm intelligence, it is useful to examine natural systems that have evolved this ability.   An excellent example is a swarm of honey bees solving the life-or-death problem of finding a new home.   A honey bee swarm accomplishes this through a process that includes collective fact-finding, open sharing of information, vigorous debating, and fair voting by the hundreds of bees in a swarm that function as nest-site scouts.”

In his informative book, The Honeybee Democracy, Seeley writes:  "Beekeepers have long observed, and lamented, the tendency of their hives to swarm in the late spring and early summer. When this happens, the majority of a colony's members--a crowd of some 10,000 worker bees--flies off with the old queen to produce a daughter colony, while the rest stays at home and rears a new queen to perpetuate the parental colony. The migrating bees settle on a tree branch in a beardlike cluster and then hang there together for several hours or a few days. During this time, these homeless insects will do something truly amazing; they will hold a democratic debate to choose their new home."

What they do IS truly amazing. We watched the swirl of bees cluster on a tree branch where they paused, as if waiting for "directions." (Or a Google map?)

We didn't see what Seeley calls "the collective-decision making of the swarm" and "the democratic debate" but indeed that happened, as it's been happening for millions of years.

In the end, the Laidlaw bees all relocated to their new home. 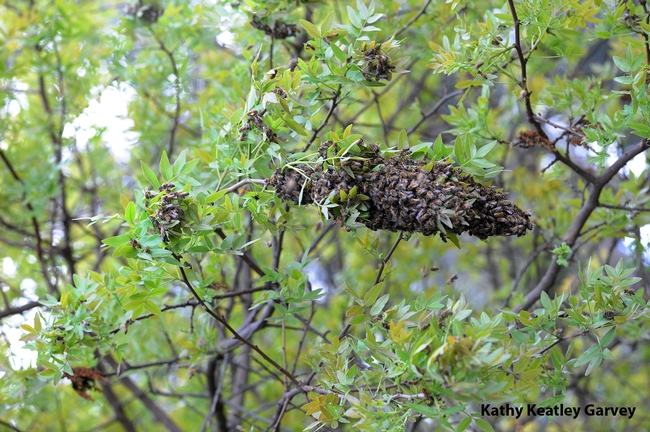 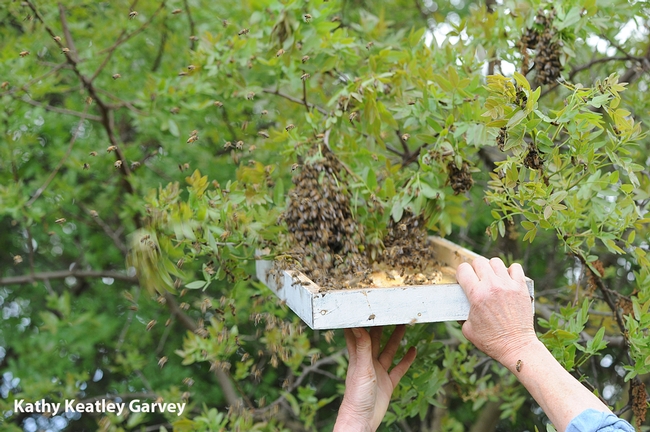 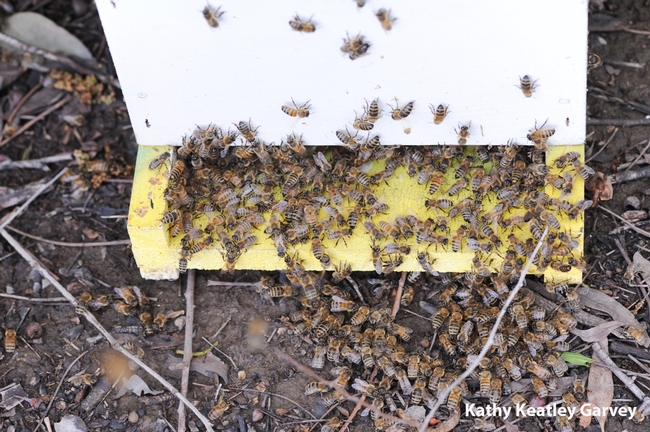