Have you seen a Polyphagous shot hole borer lately?
Published on: August 17, 2012 The Polyphagous shot hole borer.
The “Invasive Ambrosia Beetle Public Meeting” that took place on Aug. 14 in Riverside, Calif., turned the spotlight on a beetle named “Polyphagous shot hole borer.”  The PSHB has spread in Los Angeles and Orange counties. Both the beetle and a fungus it spreads were found on several backyard avocado trees in residential neighborhoods in these counties earlier this year. The beetle is responsible for the death of box elder trees in Long Beach in 2010. The box elder is one of the best hosts for the PSHB.

The beetle is very small and hard to see. Females are black in color and 0.07-0.1 inch long.  The beetle burrows into the wood, leaving a hole (there are often many entry holes on an infested tree). The beetle then infects the host plant with a new Fusarium fungus, which it carries in its mandibles, a result of a symbiotic relationship between the beetle and fungus.

The fungus, in turn, attacks the vascular tissue of the tree, disrupting water and nutrient flow within the tree and eventually causing branch dieback. Fusarium dieback symptoms on avocado include a white powdery exudate — either dry or surrounded by wet discoloration of the outer bark — around a beetle entry hole.

The panelists explained that the beetle may have come from Southeast Asia or possibly Africa. There is no good solution for dealing with the beetle and the fungus. Preventive management, including sanitation, is the best option.

Several speakers advised not to move infested wood away from an infected zone and not to accept mulch from infected areas. Growers were advised to monitor the nutritional status of their trees, chip infested branches within the infested area and sterilize tools between cuts. Proper irrigation of trees was also recommended because over-watered and under-watered trees attract this beetle.

The PSHB appears to be “tasting” different trees in search for a good host. Neither the adults nor the larvae eat the plants and wood; they live in “galleries” within the tree and feed on the fungus.

Much about the PSHB remains unknown. What is known is that the beetle population can expand its range by about 12 miles a year. The beetle flies from tree to tree, and up and down a tree as well.  Facilitated movement — packing wood, firewood — helps transport the beetle to far off places.

Chemical control has, so far, not been effective on the PSHB. Tarping or enclosing infested material is one of the solutions being considered.  Heat treatment, fumigation and burning are other options on the table. Chipping and grinding are the best options at the moment. The finger points to a beetle entry hole on an avocado trunk. Photo credit: Eskalen Lab, UC Riverside.
If you find entry holes on an avocado tree that are surrounded by white powdery exudates, scrape off the bark layer around the infected area to see the canker (discolored wood).  Then follow the gallery to look for the beetle. It is important that you not move infested avocado wood out of the infested area. Look for other hosts — castor bean, box elder, coast live oak — showing symptoms of the beetle/disease.

If you suspect you have found the PSHB or seen symptoms of Fusarium dieback in your grove or surrounding areas in other host plants, please contact your local farm advisor, pest control advisor, county ag commissioner office or UC Riverside's Dr. Akif Eskalen at 951-827-3499 or akif.eskalen@ucr.edu.  You can also call the California Avocado Commission at 949-341-1955.

The public meeting in Riverside was part of a longer three-day meeting that was organized by the Hofshi Foundation with additional sponsoring from the UCR Center for Invasive Species Research, the Entomology, Plant Pathology and Microbiology, and Botany and Plant Sciences departments, UC Cooperative Extension, the Los Angeles Arboretum, the Huntington Botanical Gardens and the California Avocado Commission. 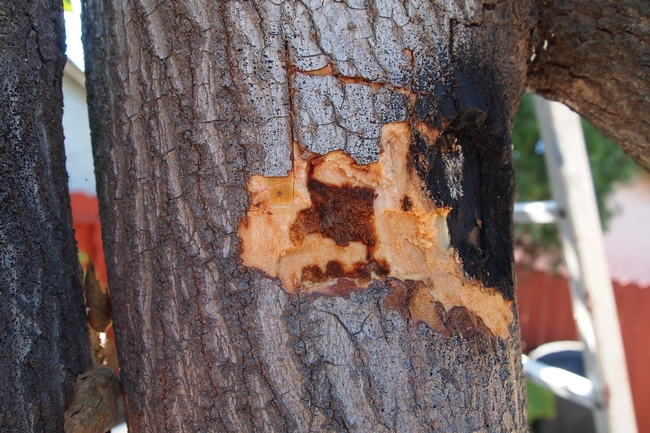 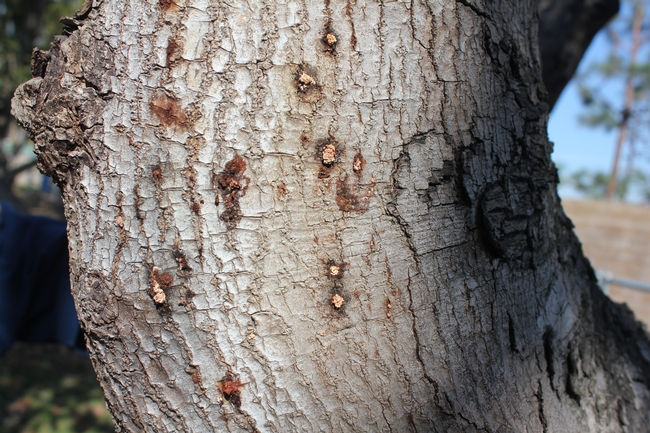 Multiple entry holes on avocado trunk. Photo credit: Eskalen Lab, UC Riverside.
Tags: Polyphagous shot hole borer (1)
Comments: 8
Comments:
by Chester Chesbro
on October 11, 2012 at 9:25 AM
I found apparent Polyphagous strikes in lower Arroyo Park in Pasadena on sycamore & willow. The location is near the casting pond and archery range.
by Conrad L. Kiernan
on December 1, 2014 at 7:50 AM
We had the Polyphagous Shot Hole Borer (PSHB) in Poplar trees at the Del Amo on ramp to the 710 south bound. PSHB was collected on site. The trees were felled, chipped, and tarped on site.
by Joe Loudermilk
on August 24, 2015 at 9:15 PM
I am 95% sure these bugs have killed a pine tree on Raymond Hill in South Pasadena.. I have found insects flying into my apartment adjacent to the tree that match the description and photos of the insect.
by Emmett Anglin
on August 27, 2015 at 10:24 AM
I have a Kwanson(sp?) Cherry tree in my back yard that appears to probably be this pest. The tree was healthy last year but this spring failed to leaf out and has by now apparently been fully infested. I have another such tree in my front yard and so far I see no evidence of similar infestation.
by Emmett Anglin
on August 27, 2015 at 10:34 AM
I just filed a report with you and realize I failed to tell you my location. My address is 546 Charro Way, Nipomo, CA 93444
by joan moseley
on October 18, 2015 at 7:20 PM
I have a California Sycamore that is fully engulfed and a large 85 year old Califoria Live Oak that was transported from Elsinore in a coffee can (as a pup) which is losing large branches in spite of spraying and seemingly the best preventative care. It's sister next to it (7 feet away) isn't sharing the disease yet but may be not be suffering from a swimming pool dug fairly (who can say)to the infected one's drip line. If you hear any thing that seems to work please email above.
by R Beale
on September 8, 2016 at 2:25 PM
I have a mature Mango tree that was identified as having the polyphagous shothole borer (PSHB). The tree looks very healthy. I just recently noticed the holes and sapping. Called an arborist to find out what the holes were on my tree. NW FULLERTON
by Carla Gersh
on November 22, 2016 at 11:11 AM
I have a 20 foot Brazilian pepper tree that is not dead. It has an infection of beetles. Apparently, they are box hole borer bettles. The tree will be removed next week. There are 2 more trees next to it that are ok.

I live in Dana Point. Our area has many trees (Danawoods hoa) I am concerned about my citrus trees.
Leave a Reply: