It's not often you see a monarch butterfly and a digger bee in the same photo.

Such was the case on a recent visit to a lantana patch at a west Vacaville home.

The monarch butterfly touched down on a blossom and was beginning to nectar when along  comes a digger bee, a male Anthophora urbana (as identified by native pollinator specialist Robbin Thorp, emeritus professor of entomology at the Universit of California, Davis.)

"Maybe it was planing on dive bombing the big intruder from his territory," Thorp said. "However, these males are not known to be especially territorial. Maybe he's just checking out the competition for nectar."

This is the solitary, ground-nesting bee that Leslie Saul-Gershenz, graduate student in the Neal Williams lab at UC Davis, is researching. She's published research on a species of digger bee, Habropoda pallida, a solitary ground-nesting bee, and its nest parasite, a blister beetle, Meloe franciscanus, found in the Mojave Desert ecosystem.

“Our preliminary data show that the blister beetle exploits four other native California bees including important pollinators in the genus Habropoda and Anthophora," she recently told us.

Historically, the blister beetle, Meloe franciscanus, was known to be a nest parasite of Anthophora edwardsii, distributed throughout California.

See her amazing photo of the parasitic larvae of the blister beetle on the digger bee, Habropoda pallida, on the UC Davis Entomology website. 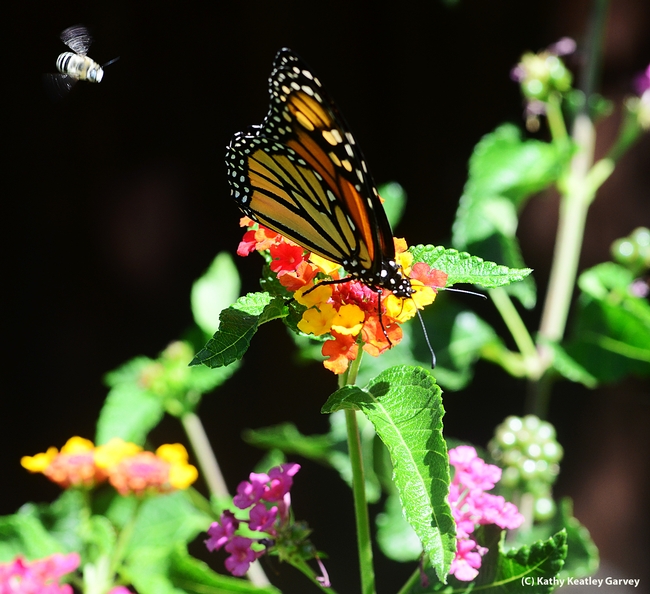