"Mantis Master Keeper" Andrew Pfeifer with an adult female Phyllocrania paradoxa (ghost mantis)
Who isn't fascinated by a praying mantis, that pre-historic looking predator that lurks on a plant and snags honey bees, butterflies and other insects in lightening-quick lunges?

And who isn't fascinated by those who study them, rear them and share their knowledge with others?

Meet “Mantis Master Keeper” Andrew Pfeifer, of Monroe County, N.C. He keeps about 70 mantids in his collection, educates others about this fascinating insect at Bugfest shows, and administers the Facebook page, “Mantis Keepers,” known as world's largest active mantid community, with nearly 7000 members.

“Mantids fascinate me for their predatory behavior more than anything else,” Pfeifer says, “but I also love to see the extreme morphology that many species have adapted to better camouflage in their environment. I've been fascinated with mantids and other arthropods since I was young, but have been keeping and breeding many species for about six years. “In that time I have kept over 25 different species from around the world in any shape, size, and color.”

Peruse the Mantis Keepers page and you'll be amazed at the wealth of information you'll find. Post a photo of a mantis and he and other administrators will identify it promptly. It's difficult to realize that Andrew Pfeifer is only 17 and a high school senior.

“Andrew has put together a terrific resource for anyone interested in mantids,” commented Lynn Kimsey, director of the Bohart Museum of Entomology and professor of entomology at the University of California, Davis. “We have quite a number of students and members of the public who love mantids and we point them to him.” Fourth instar female orchid mantis. (Photo by Andrew Pfeifer)
“Kids love them," Pfeifer says. "That's why so many enjoy my exhibit every year, as I let the kids handle them with my supervision.”

Pfeifer says his collection on mantids "is a a bit on the low side for the number of species with Phyllocrania paradoxa, Parasphendale affinis, and Hymenopus coronatus." He usually has about 60 mantids, but “that's subject to change with either new hatches, new species entering my collection, or sale of young nymphs to keep my collection running smoothly.”

“I have two new and rare species coming soon, Plistospilota guineensis and Epaphrodita musarum, which will increase the number to about 70 individuals. This doesn't include all the arachnids and other arthropods in my collection.”

At any given locality, Pfeifer says he can usually find a mantis in about 10 minutes if one is in the area. “Depending on the species and location, mantids can be quite easy to find. Species such as Tenodera sinensis seem to love man-made structure around disturbed and weedy areas. During the late summer, many mantids will hang out on goldenrod and other flowering plants, as they are after the many pollinators that visit the blooms. Male mantids may also be collected at light traps during the breeding season when they fly at night.”

“Adult male mantids typically begin flying after about a week or so from reaching maturity," Pfeifer says. "Most fly at night, and actually have a single ear between the second and third pair of legs that is designed to evade bats and their sonar. Females are not capable of flight for most species, and most that can fly are for short distances. Males usually fly for a couple hundred feet at a time.” “They essentially eat anything,” Pfeifer says. “Moths and flies are among the favorites for my specimens. Grasshoppers often incorporate a large part of an adult female's diet.  I've fed mine just about anything that isn't a vertebrate. They are not put off by insect defenses such as chemical sprays or vomiting, and are well equipped to handle things such as bees and wasps. They can deal with quite a few insect defenses, even able to disable stingers.”

It's a myth that colors determine the gender of a mantis. “Many myths surround the mantids, most of which are merely superstition or made up,” he notes. “Colors do not determine the sex of the mantis, with both males and females capable of being different colors. Mantids are capable of changing the color of their body, but only after molting. A green mantid can turn brown in just one molt.”

It's also a myth that male mantids always lose their head during courtship or after mating. “Mantids can exhibit cannibalism during courtship, but this is not a common occurrence,” he points out. “It mostly occurs when the female has not had good access to larger prey, and needs the nutrition for egg development. I've had males mate with multiple females without incident, with a male Phyllocrania paradoxa holding the record at eight copulations.”

Temperate species can hatch, mature, breed, and die in four months in the North, but normally mantids live around six months to a year depending on species,” Pfeifer says, noting that “two of my female Phyllocrania paradoxa are going on 14 months old and are still in good health.”

Although mantids are not endangered, there is one threatened species in Southern Europe, he points out. “They are not illegal to keep or kill, but this one was used to avoid people harming them without need.”

He's kept several unusual native species found in the East, such as Brunneria borealis and Gonatista grisea. “Our native species are quite interesting, and not seen as often as the introduced. Most natives are only found down South, in states such as Florida, Texas, and Arizona. There are over twenty native species, with my favorite being the Texas unicorn mantid (Phyllovates chlorophaea).”

California has only a handful of mantid species, Pfeifer says. The natives include Stagmomantis limbata, Stagmomantis californica and Litaneutria minor. Introduced ones: Mantis religiosa, Tenodera sinensis and Iris oratoria. “Typically you have pockets for native species where you see only one,” he says.

Pfeifer welcomes visitors to the Mantis Keepers site. The introductory statement says it well: “Beauty and charisma of the beloved mantis...it's what binds us all.” 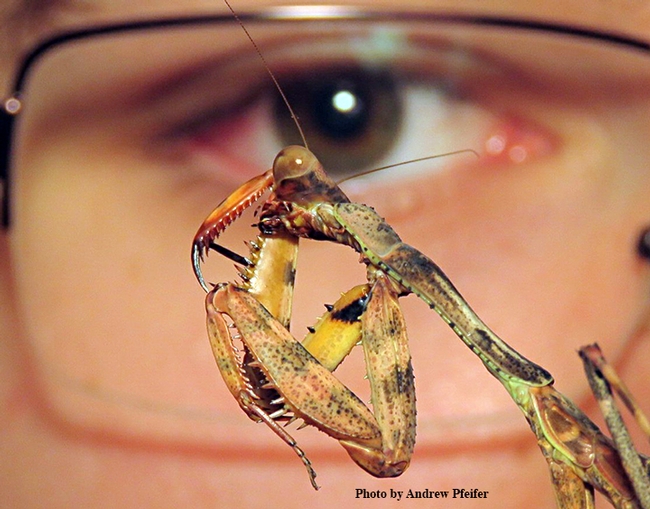 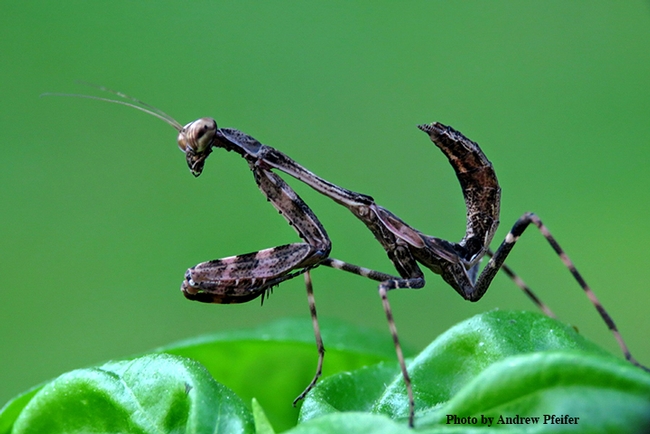 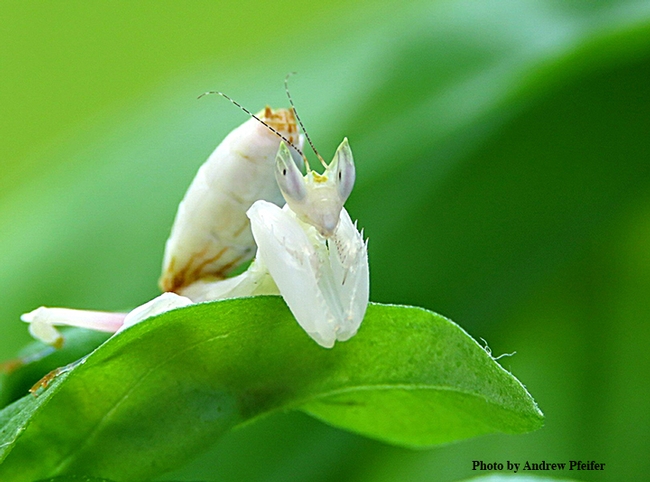 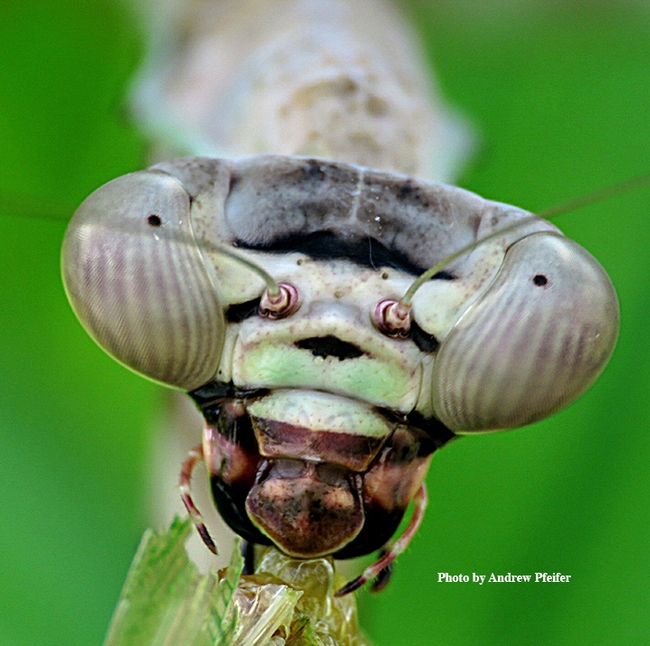