Robbin Thorp by an almond tree on Bee Biology Road in 2010. (Photo by Kathy Keatley Garvey)
The date is set.

The celebration of life for global bee expert Robbin Thorp, distinguished emeritus professor of entomology at UC Davis and a beloved scientist, is scheduled for Friday, Oct. 11 from 6 to 8 p.m. in the Putah Creek Lodge. The venue is located on Putah Creek Drive, southwest corner of the UC Davis Arboretum.

Lynn Kimsey (lskimsey@ucdavis.edu), director of the Bohart Museum of Entomology and UC Davis professor of entomology, is coordinating the memorial, with Professor Neal Williams (nmwilliams@ucdavis.edu) assisting).

Dr. Thorp died June 7 at his home in Davis at age 85. A 30-year member of the UC Davis entomology faculty from 1964-1994, he achieved emeritus status in 1994 but continued to engage in research, teaching and public service until a few weeks before his death. He was named a UC Davis distinguished emeritus professor in 2014.

A tireless advocate of pollinator species protection and conservation, Dr. Thorp was known for his expertise, dedication and passion in protecting native pollinators, especially bumble bees, and for his teaching, research and public service. He was an authority on pollination ecology, ecology and systematics of honey bees, bumble bees, vernal pool bees, conservation of bees, native bees and crop pollination, and bees of urban gardens and agricultural landscapes.

“Robbin's scientific achievements during his retirement rival the typical career productivity of many other academic scientists,” said Steve Nadler, professor and chair of the UC Davis Department of Entomology and Nematology. “His contributions in support of understanding bee biodiversity and systematics are a true scientific legacy.”

Professor Kimsey recalled: "I've known Robbin since I was a graduate student at UC Davis. Even though he wasn't my major professor, my project was on bees and he was incredibly helpful and supportive. His enthusiasm about pollinators and bees in particular actually grew after he retired, and he continued helping students and researchers and was the backbone of so much research. His support and kindness was matched by his undemanding assistance and expertise. What a terrible loss to his family and to the research and conservation communities." Robbin Thorp in his office in the Harry H. Laidlaw Jr. Honey Bee Research Facility in July 2018. (Photo by Kathy Keatley Garvey)
Professor Williams, who organized a symposium in Dr. Thorp's honor at the 2019 Pacific Branch, Entomological Society of America meeting in San Diego, praised his tireless efforts and generosity.  "Through his tireless efforts in research, advocacy and education, he has inspired a new generation of bee researchers…I like many others, feel truly honored, to have received the mentoring of Robbin and to have him as a colleague.”

In his retirement, Dr. Thorp co-authored two books Bumble Bees of North America: An Identification Guide (Princeton University, 2014) and California Bees and Blooms: A Guide for Gardeners and Naturalists (Heyday, 2014). Locally, he was active in research projects and open houses at the Bohart Museum of Entomology and the Häagen-Dazs Honey Bee Haven. In his research, he monitored bees in the haven, a half-acre bee garden on Bee Biology Road operated by the UC Davis Department of Entomology and Nematology. He detected more than 80 species of bees in the garden.

Colleague Norman Gary, UC Davis emeritus professor of entomology, noted earlier this year that Robbin "is recognized internationally for his expertise and research on bees, especially non-Apis species, known as wild bees. I doubt that there is anyone else in the world who can compete with his expertise in the systematics of the 20,000 species of bees on this earth. He has the perfect balance of research of field research on the biology and behavior as well as laboratory research on the taxonomy of bees.” He was the go-to person to identify a bee by species.

Dr. Thorp was an authority on the critically imperiled Franklin's bumble bee (Bombus franklini), which he began monitoring in 1998 in its narrow distribution range of southern Oregon and northern California. He was instrumental in placing Franklin's bumble bee on the Red List of Threatened Species of the International Union for Conservation of Nature and Natural Resources (IUCN). In 2010, he and the Xerces Society for Invertebrate Conservation petitioned the U.S. Fish and Wildlife Service for it to be placed on the endangered species list. The U. S. Fish and Wildlife placed it on its proposed endangered species list on Aug. 14, 2019.  (See Bug Squad blog.)

In August of 2016 a documentary crew from CNN, headed by John Sutter, followed him to a meadow where Dr. Thorp last saw Franklin's bumble bee in 2006. Sutter wrote about the UC Davis entomologist, then 82, in a piece he titled "The Old Man and the Bee." Robbin Thorp, on sabbatical, in Australia in the early 1980s.(Family Photo)
Born Aug. 26, 1933 in Benton Harbor, Mich., Dr. Thorp received his bachelor of science degree in zoology (1955) and his master's degree in zoology (1957) from the University of Michigan, Ann Arbor. He earned his doctorate in entomology in 1964 from UC Berkeley, the same year he joined the UC Davis entomology faculty. He taught courses from 1970 to 2006 on insect classification, general entomology, natural history of insects, field entomology, California insect diversity, and pollination ecology.

Every summer from 2002 to 2018, Dr. Thorp volunteered his time and expertise to teach at The Bee Course, an annual workshop sponsored by the American Museum of Natural History and held at the Southwestern Research Station, Portal, Ariz. The intensive 9-day workshop, considered the world's premiere native bee biology and taxonomic course, is geared for conservation biologists, pollination ecologists and other biologists.

Highly honored by his peers, Dr. Thorp was named a fellow of the California Academy of Sciences, San Francisco in 1986; recipient of the Edward A. Dickson Emeriti Professorship of UC Davis in 2010; and recipient of the UC Davis Distinguished Emeritus Award in 2015. Other honors included: member of the UC Davis Bee Team that won PBESA's Team Award in 2013. In addition, he was a past president (2010-2011) of the Davis Botanical Society, and former chair (1992-2011) of the Advisory Committee for the Jepson Prairie Reserve, UC Davis/Natural Reserve System.

Professor Claire Kremen of the University of British Columbia, formerly of UC Berkeley, praised him in her letter of support for his nomination for distinguished emeritus professor in 2014:

"I have had the privilege of working with Dr. Thorp as a close colleague since 1999," she wrote. "I can definitely say that without his contributions, I could never have developed as extensive and impactful a research program on pollinator conservation and pollination services. It is even more noteworthy that Dr. Thorp's contributions to this research program have all occurred since his 'retirement'– he has had a very active retirement indeed."

"Collectively, Dr. Thorp's contributions have impacted 35 publications that have emerged from this research program to date, with many more either submitted or nearing the submission stage," Kremen related in her 2014 letter. "He has also been a co-author on a number of these publications. Not only has Dr. Thorp had such a significant effect on the work of my lab, but he conducts his own primary work documenting the status of rare bumble bee species like Bombus franklini and B. occidentalis and contributes at a similar level to other research labs such as with his long-time collaborators Dr. Gordon Frankie and Dr. Neal Williams. It's really quite amazing how he manages to do it all."

His wife, Joyce, 84, preceded him in death on Dec. 9, 2018. Survivors include three children, Kelly, Katie and Jeff, and stepchildren Donna Gary and Steve Gary. (See more information in his obituary on the Department of Entomology and Nematology website.) 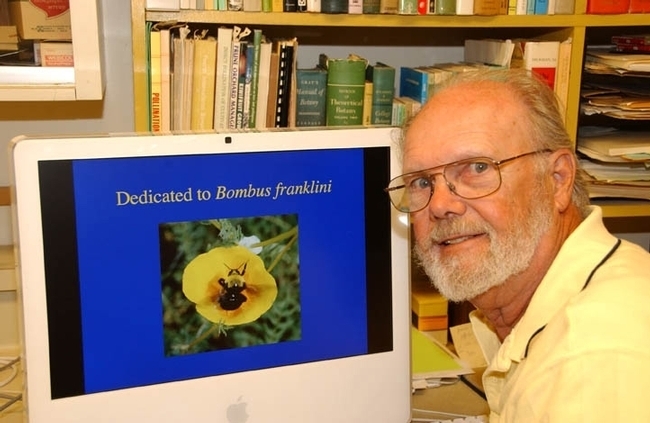 Robbin Thorp with his screensaver, an image he took of the critically imperiled Franklin's bumble bee. (2007 Photo by Kathy Keatley Garvey) 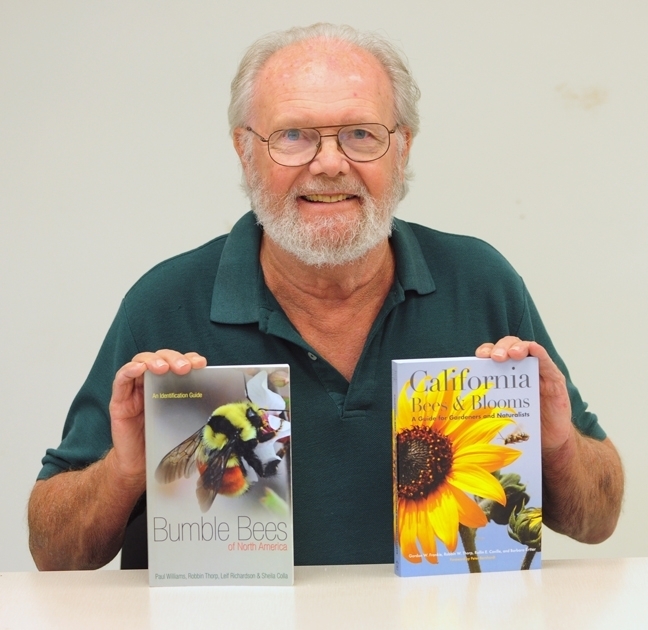