There should be a crowd at the UC Davis Department of Entomology seminar on Wednesday, Dec. 7.

That's when evolutionary ecologist Ruth Hufbauer, associate professor at Colorado State University, Fort Collins, who researches insect-plant interactions, will speak on “The Roles of Demography and Genetics in the Founding of New Populations.” Her talk is set for 12:10 to 1 p.m. in 122 Briggs Hall. Plans call for it to be recorded and broadcast at a later date on UCTV.

This is the last in the series of UC Davis Department of Entomology seminars for the fall quarter. Host Louie Yang, assistant professor of entomology, will introduce Hufbauer.

Have you ever wondered how insect populations become established in a new environment? Their fate rests on both their demographic and genetic compositions, Hufbaue says.

Hufbauer, who co-organized a seminar on "Evolution and Biological Control" at the Entomological Society of America's 59th annual meeting, held last month at the Reno-Sparks Convention Center, says that "Establishment success increases with the number of founders as well as with their genetic diversity. However, because more individuals typically harbor more genetic variation, demography and genetics are linked. To disentangle them requires factorial experiments manipulating numbers of founders of different genetic backgrounds--inbred to outbred.”

Hufbauer will present data from two such factorial experiments. “In both systems, demography and genetic background interact to determine the success of founders. Inbreeding led to reduced success, and those effects depended upon the species and the environment. Inbreeding and genetic drift can, however, have positive effects as well, particularly in the case of purging of deleterious mutations. A third data set supports the idea that purging can happen in natural populations, and may influence subsequent population dynamics.”

Hufbauer, who grew up in California, earned her bachelor of arts degree at UC Berkeley and her doctorate at Cornell. In 2000, she joined the faculty of the Department of Bioagricultural Sciences and Pest Management, Colorado State University.

On her website, Hufbauer quotes Ukrainian geneticist/evolutionary biologist Theodosius Dobzhansky (1900-1975): “Nothing in biology makes sense except in the light of evolution.”

She acknowledges that “these days studying and teaching evolution in the U.S. is quite controversial." So, she's thoughtfully posted some links to "sites from the scientific community aimed to educate people about the basics, not only of evolutionary biology, but also what physics and chemistry teach us about the world.”

The National Center for Science Education -The Science of Evolutionary Biology

The National Academy of Science's Science and Creationism Resource Site 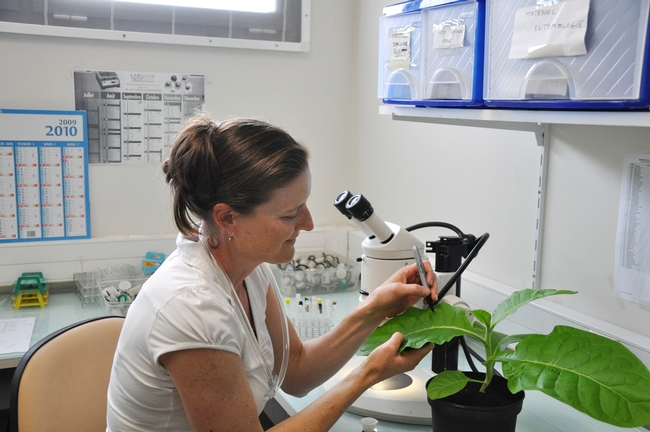