If you attended the 2017 Entomological Society of America (ESA) meeting, held recently in Denver, you probably recognized a familiar face and his research.

This is the third year he has won first-place honors in the President's Prize competition, an opportunity for graduate students to present their research.

Boudinot, who studies classification and evolution of morphology, delivered a 10-minute oral presentation in the Systematics, Evolution and Biodiversity Section on "The Protopodal Theory of Genitalic Evolution in the Hexapoda (Arthropoda: Mandibulata: Pancrustacea)."

Judges evaluate the oral presentations on scientific content (50 percent) and presentation (50 percent). For scientific content, judges score them on introduction and background with pertinent literature cited; objectives clearly stated and concise; materials and methods (study design) clear and concise; results and discussion clear, concise and accurate; and significance of results to field of study. Judges evaluation the presentation on organization, slides and delivery.

For his work, he received a one-year free membership in ESA, a $75 cash prize, and a certificate.

Boudinot's previous President's Prizes were for presentations on the male genitalia of ants, and for providing the first male-based identification material for the ant genera of the New World.

"I study ants because they are a unique evolutionary radiation of wingless, social wasps; through the study of their genetic and morphological diversity, we are better able to understand the ecological and biogeographic components of the process of speciation," Boudinot said today. "I came to study ants through several years of work I did as an undergraduate sorting and identifying ants from thousands of leaf litter samples collected in Central America by the Leaf Litter Arthropods of MesoAmerica project, which I was involved in (see photo of him in Honduras during 2010, as well as a little blurb from the year before he joined UC Davis graduate program)."

Boudinot traces his initial interest in the taxonomic and morphological diversity of ants through direct observational experience. Now, as a member of the Ward Lab, he continues his work, which encompasses three components:

Boudinot completed his undergraduate work at the Evergreen State College, Olympia, Wash., and spent a year working as a research technician at the University of Utah before starting his graduate work in 2014 with advisor Phil Ward. He focuses his research on evolution and ecology, approached from the perspective of systematics. “I integrate several lines of inquiry to answer historical evolutionary questions, including morphological and molecular phylogenetics, paleontology, and traditional comparative morphology,” Boudinot related. “I specialize on the skeletomusculature system of the male genitalia of the Hexapoda and the classification of the Formicoidea.”

Ants are highly diverse, with more than 13,000 known species, Boudinot says. "They are, however, but one stitch in the diversity of all insects, and we are entering a new era for the study of morphology in the 21st century."

The genitalia of male insects are fascinating, he said. "Both male and female insect genitalia are derived from the appendages of a pair of abdominal segments. Evidence from the skeletomusculature indicates that these structures are really legs of a crustacean ancestor that have been modified for numerous reproductive tasks--from copulation and insemination, to singing and silk-spinning."

When he's not studying ants, you can find Brendon Boudinot serving as president of the Entomology Graduate Student Association (EGSA), his second term at the helm. In this capacity, he functions as student liaison to the faculty, and as chair or co-chair of several committees, both for departmental and graduate student events (including the Entomology Seminar Series, Retreat Committee, annual Graduate Student Recruitment Day, Picnic Day, and various graduate student social events).

UC Davis doctoral candidate Sarah Silverman of the James R. Carey lab joined Boudinot in the winners' circle at the ESA meeting. She won a second place award in the President's Prize competition, delivering a 10-minute oral presentation in the Diptera-Mosquitoes category of the Medical, Urban, and Veterinary Entomology Section,  on “Population as Cohort:  Interpreting the Mortality Patterns of Wild-Caught Adult Mosquitoes of Unknown Ages.”

Her work at UC Davis is in the field of insect demography. “I specifically study insect lifespan in the wild," she said, "as well as the the age-structure of insect populations in the wild using an innovative methodological approach: the capture of live-insects in the wild which are then maintained and observed in the lab until death." Silverman completed her bachelor's degree in environmental science at McGill University in Montreal. For her undergraduate thesis, she studied the phenology of wild Osmia bees. 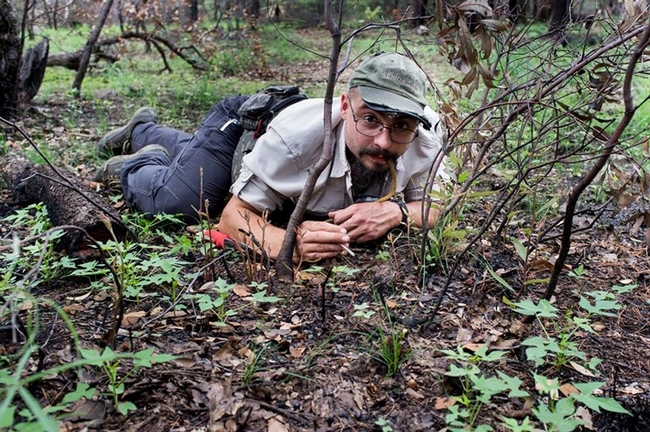 Myrmecologist Brendon Boudinot in the field. This was taken at the Southwest Research Station in the Chiricahua Mountains near Portal, Ariz., by Roberto Keller, National Museum of Natural History and Science, Portugal. 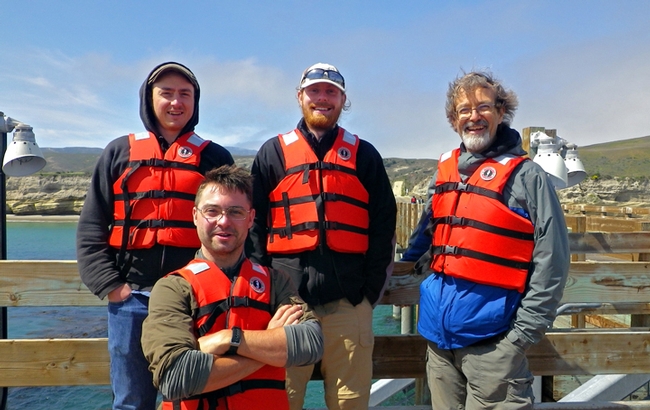 Brendon Boudinot (front) with fellow myremcologists at a 2014 National Geographic expedition to Santa Rosa Island, led by David Holway and Phil Ward. In back (from left) are researchers Matt Prebus, Marek Borowiec and their major professor Phil Ward. Prebus, a doctoral candidate, will be giving his exit seminar this spring. Borowiec is now a postdoctoral researcher at Arizona State University. 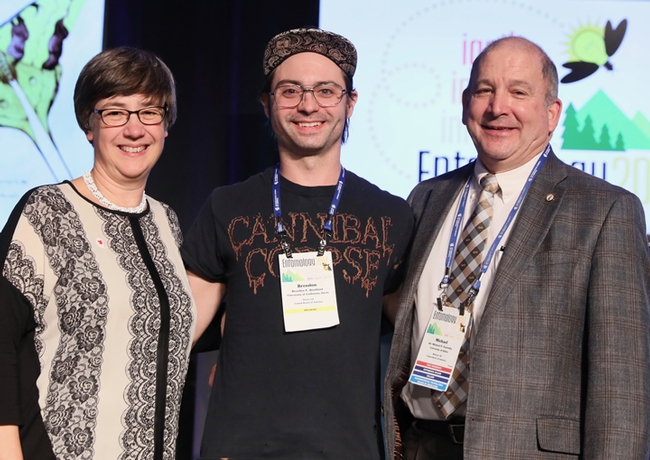