A worker bee. (Photo by Kathy Keatley Garvey)
When a bee truck overturns, all sorts of things can happen. None of them is good--unless both the people and the bees fare well.

Bystanders panic. Bees can and do react to all the commotion by stinging the first responders and the bystanders. It's especially difficult at night.

So when Extension apiculturist (emeritus) Eric Mussen of the UC Davis Department of Entomology and Nematology, who retired in June 2014 after 38 years of service, was asked about this, and what first responders can do, we thought we'd share the informatoin.

"It is hard to know where to start with protecting people from bee spills," he says.  "Depending upon in what part of the country it happens, the concern about loose bees varies.  In a large metropolitan area, it is likely that someone will try to put down (kill) the bees as quickly as possible.  In rural agricultural areas, the people value the bees and probably would try to salvage as many hives and bees as possible."

"Every potentially responsible agency should have a list of beekeepers to contact when such an incident happens.  The beekeepers can go to the scene, access the problem, and help clean it up." Eric Mussen
Mussen cautions that if you respond to the scene, whether you are law enforcement, a firefighter, bulldozer or front-loader driver, towing crew, or news media, you should not exit your vehicle without wearing proper protective gear. " If you have an inkling that you may be allergic to bee stings, you should not even be at the scene.  A messy problem can turn into a life-threatening emergency when allergic people get stung."

"Water misted into the flying bees will tend to 'ground' them, temporarily, and many will drown," he warns. "To be sure the bees are down for good, some use fire-fighting foam instead of water.  This will cause an enormous financial loss for the beekeeper, but it calms things down rather quickly.  If the bees form a gigantic cluster under an overpass, the bees can be salvaged or, in at least one case, burned up using a flame thrower."

"People should understand that it takes quite a while to upright the hives and get the frames back into them," Mussen says. "They should also know that the bees are not likely to go back into the hives, on their own, until nighttime." Bees do not fly at night.

"If the bees are being 'rescued,' someone has to help haul away the up-righted hives and put them in a safe place," Mussen points out. "Not infrequently the assisting, anonymous beekeepers leave with the hives and never return them to the owner.  Some empty hives have to be left at the scene to collect the remaining bees that are flying around.  They can be picked up early the next morning."

Those are just some considerations, Mussen says. "Every event is different.  If the emergency folks have met with a few beekeepers to talk about what to do, it will go a lot easier if it ever happens." 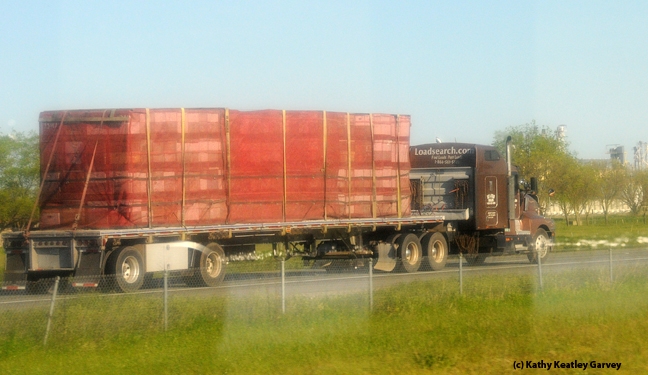