We've heard the stories and read some of the scientific literature about what a female praying mantis will do to her partner during the mating process. Sexual cannibalism. She'll bite the head off of her mate and eat it--but the mating process continues unabated. (Except the male has lost his head )

We spotted a mating pair of mantids in our bee garden on Saturday. It was early evening, around 7. They were hidden among the long strands of English lavender.

My camera caught a quick shot of the pair. Yes, two heads. The next picture I took was of the male minus his head. He "lived"--that is, moved around, for about eight hours before expiring. Or, as Lynn Kimsey, director of the Bohart Museum of Entomology and professor of entomology at the University of California, Davis, says: "It will live until it dries up."

Entomology Today weighed in on the sexual cannibalism behavior in its Dec. 22, 2013 edition.

"An urban legend about female praying mantises always eating males during or after mating has circulated for a long time. However, reality is much more complicated.

"Kyle Hurley, an entomology student from the University of Central Arkansas, spent two years observing praying mantises in the lab and made some startling observations. For example, in one out of 45 cases the male actually consumed the female. And in one out of 45 cases, the female removed the head of the male before mating (the males were still able to finish the job)."

Marianne Shockley Robinette, an entomologist at the University of Georgia, was quoted as saying in Entomology Today: "While it has been observed in artificial settings such as laboratories where they're rearing praying mantises, it's rarely been observed in a natural environment.”

Even Snopes, known for debunking urban legends, weighed in on this.

"Yes, the female praying mantis does sometimes eat her mate. In fact, male mantises will often offer themselves up as food to the female during the mating process, and from a biological standpoint this action makes sense: There's no point to mating with a female who might die from a lack of food before she can lay her eggs and pass the father's genes onto the next generation. This doesn't happen all the time, however, and its frequency of occurrence and the reasons for it are still a subject a debate within the entomological world."

The clincher is a YouTube video which clearly shows a female decapitating her mate. If this kind of thing makes you squeamish or queasy, you probably shouldn't watch it. (At least before breakfast.)

But yes, it happens. Nature is not always nice. 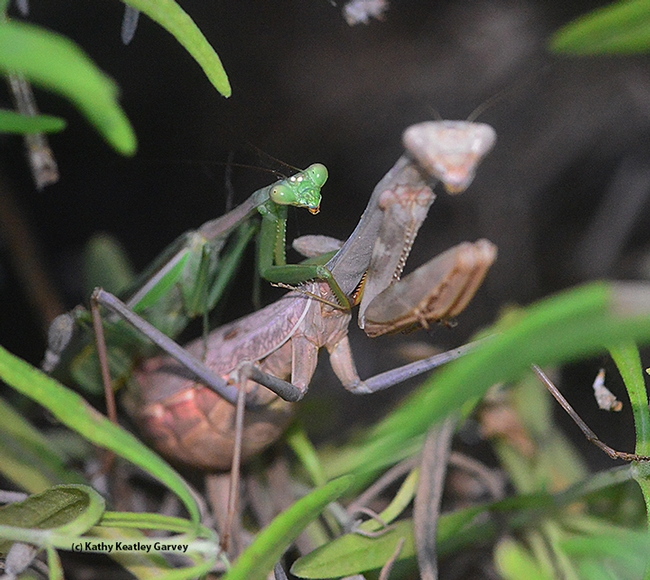 A mating pair of praying mantids. At left is the male, soon to lose his head. (Photo by Kathy Keatley Garvey) 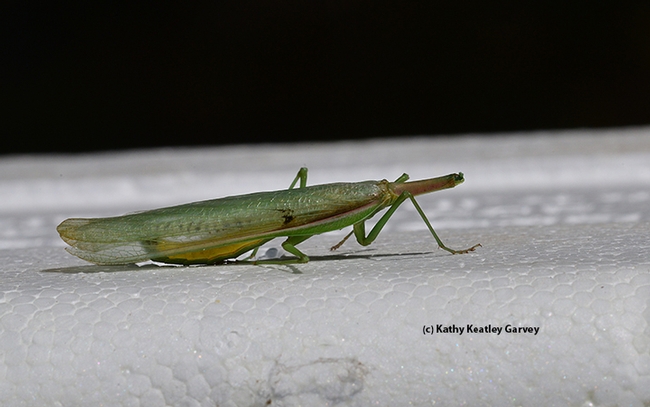 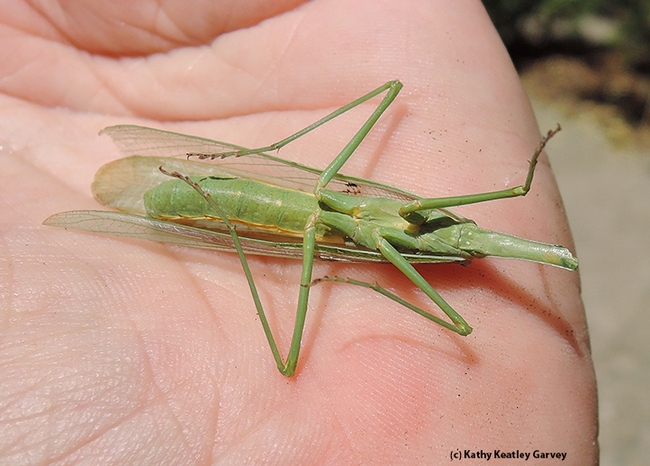