For years we've marveled at the migrating whales passing Point Reyes as we stood glued to our binoculars.

And we've expressed awe that a bird--a plover--makes nonstop flights over the central Pacific Ocean from Alaska to Australia and New Zealand.

Amazing. Nothing short of incredible, especially when you consider that many homo sapiens can't find their way out of a parking lot.

They're all on the move. But how many of us have seen the lesser known migrants, such as winged aphids, ballooning spiders, mites, locusts, pelicans, grasshoppers, and armyworm moths, on the move?

Enter Hugh Dingle, an emeritus professor of entomology at the University of California, Davis, and a worldwide authority on animal migration.

Dingle, who was featured in National Geographic's cover story on "Great Migrations in November 2010 and interviewed by LiveScience for its November 2010 piece on “Why Do Animals Migrate?", has just published the second edition of his book, Migration: The Biology of Life on the Move (Oxford University Press), a sequel to the first edition published in 1996.

The full understanding of migration, or “life on the move,” involves genetics, physiology, and morphology, as well as behavior and ecology, Dingle says.

"The program or syndrome includes specific modifications of metabolic physiology like enhanced fat storage to fuel migration and of sensory systems to detect inputs from the sun, stars, and magnetic field lines to determine compass direction. Intimately involved in the latter are daily and yearly biological clocks. The pathway followed is an outcome of the syndrome of migratory behavior and is part of the ecology that provides the natural selection acting to determine the evolution of migration.”

Not all migration is a round trip; sometimes it's one-way, Dingle says.  “Important defining behavioral characteristics are specific departure and arrival tactics and the refusal to stop even in favorable habitats until the migration program is complete,” Dingle says. “In the words of National Geographic reporter David Quammen migrants ‘are flat-out just gonna get there.'"

Why is it important to understand the biological basis of migration and its evolution? “Because migration is so widespread and because migrants have such impact on both natural and man-altered ecosystems,” says Dingle, who achieved emeritus status in 2003 after serving on the faculty of the UC Davis Department of Entomology (now the UC Davis Department of Entomology and Nematology) from 1982 to 2002.

In his book, Dingle covers the interaction between behavior and outcome. Another important focus: he covers the relation between migration and life histories, including the evolutionary genetics of the relationship. Long-distance round-trips, for example, require long lifespans, hence most insects, although not all, migrate only one-way.

“Natural selection acts differently on long versus short lives," Dingle says. "With long lives there are usually many opportunities to produce offspring; with short lives there may be only one. Thus reproductive opportunities may determine when and where to migrate. Migrating aphids postpone reproduction until they colonize new host plants; birds reproduce following migration in the spring, but not in the fall. Some birds and insects use migration to exploit ‘rich patches' and breed in different places in different years or even in the same year."

Dingle, former secretary of the International Society for Behavioral Ecology and past president of the Animal Behavior Society, says he wrote the book for "students of migration and for those biologists who are generally interested in the functioning and adaptations of whole organisms."

Dingle is a fellow of the American Association for the Advancement of Science and the Animal Behavior Society. His research has taken him throughout the world, including the UK, Kenya, Thailand, Panama, Germany and  Australia.

In some respects, he, too, migrated. 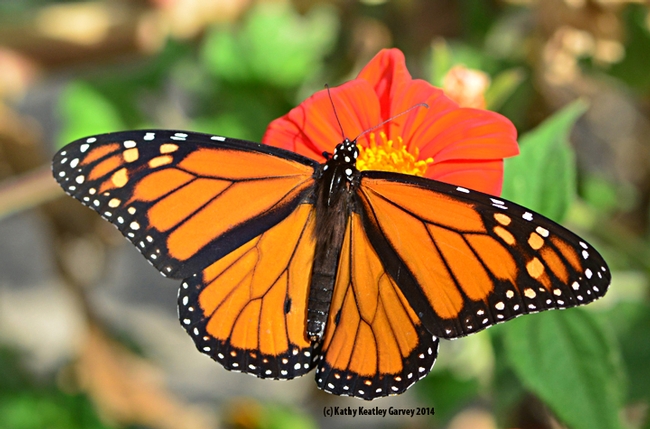 A mighty male Monarch on the move. On its way to one of coastal California's overwintering sites, it stops to sip from flight fuel (nectar) from a Mexican sunflower, Tithonia. (Photo by Kathy Keatley Garvey)
Tags: Danaus plexippus (47), Hugh Dingle (17), migration (8), monarch butterflies (82), whales (1)
Comments: 0
Saving the Monarchs

A recent survey published in Conservation Letters showed that Americans are willing to spend at least $4.78 billion to help conserve monarchs (Danaus plexippus), one of the most recognizable of all insects. Indeed, what is more spectacular than  the multigenerational migration of monarchs heading from their breeding grounds in northern United States and southern Canada to their wintering grounds in central Mexico and coastal California?

The study of 2,289 U.S. households, led by Jay Diffendorfer of the U.S. Geological Survey, Geosciences and Environmental Change Science Center, Denver, found that we Americans love monarchs so much that we're more than willing to plant milkweed, their larval host plant, to save them.

The article, published Oct. 28 and titled National Valuation of Monarch Butterflies Indicates an Untapped Potential for Incentive-Based Conservation, calls attention to the destruction of the monarch's habitat and the importance of conservation.

"Since 1999, the size of the overwintering colonies in Mexico and California have declined, and the 2012 survey in Mexico showed the lowest colony size yet recorded, which prompted wide-scale media reports," the authors wrote. "Habitat loss in the overwintering sites in Mexico and California is well-documented, although no direct empirical link between declining overwintering habitat and monarch numbers exists. In addition, the growing use of glyphosate-tolerant genetically modified crops has reduced larval host plant (milkweed, Asclepias spp) abundances in farm fields across United States and Canada. Increasing acreage of glyphosate-tolerant corn and soybeans are negatively correlated to monarch numbers, with the area of milkweed in farm fields in the United States declining from an estimated 213,000 to 40,300 ha."

Biologist Hugh Dingle, emeritus professor of entomology at UC Davis, is among those studying their migration. (Read his quotes in the National Geographic cover story, "Mysteries of Great Migrations," published in November 2010. Dingle is now working on a much-anticipated book on migration from his headquarters in the Sharon Lawler lab, UC Davis Department of Entomology and Nematology.

Butterfly expert Art Shapiro, distinguished professor of evolution and ecology at UC Davis, monitors butterflies in Central California. Here's what he has to say about monarchs on his website, Art's Butterfly World.

Meanwhile, a day before Conservation Letters published the survey, a lone monarch butterfly fluttered into our backyard to sip nectar from lantana. It lingered for 10 minutes.

What a treat to see! 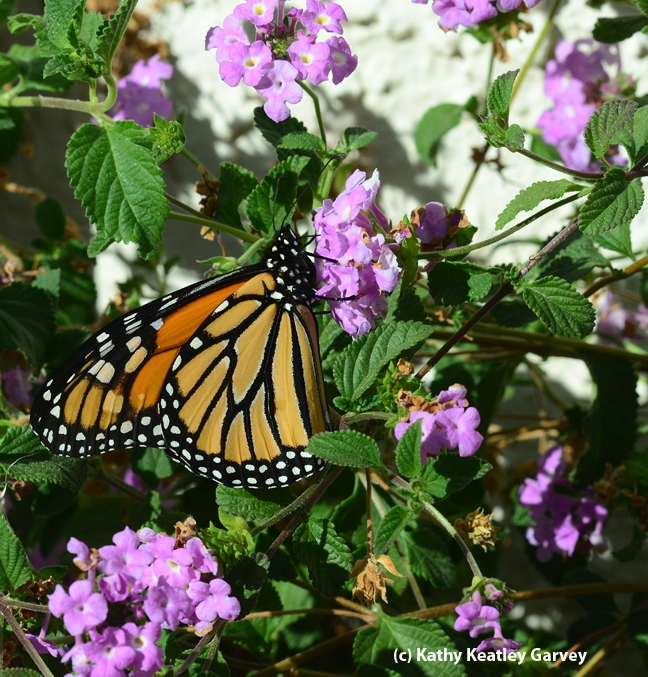 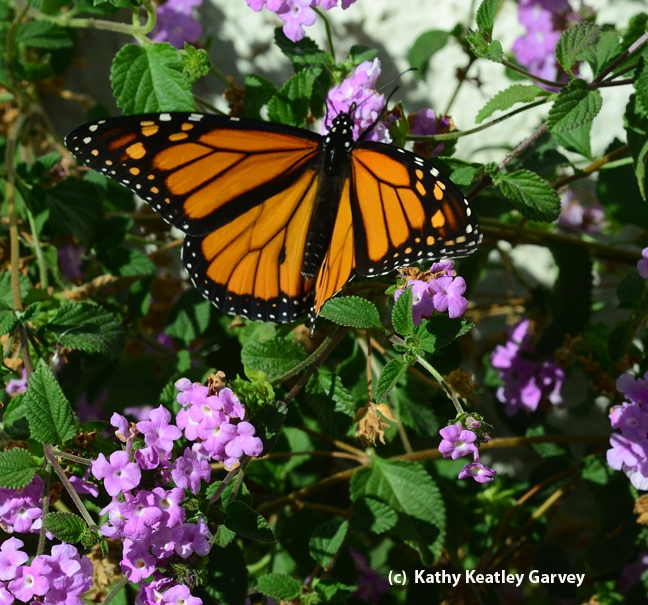 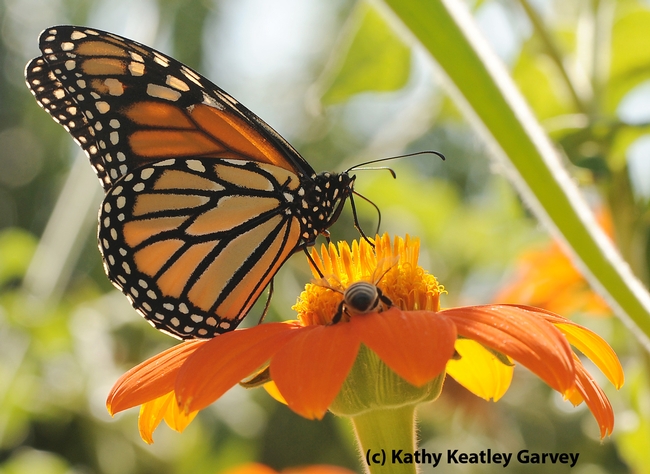 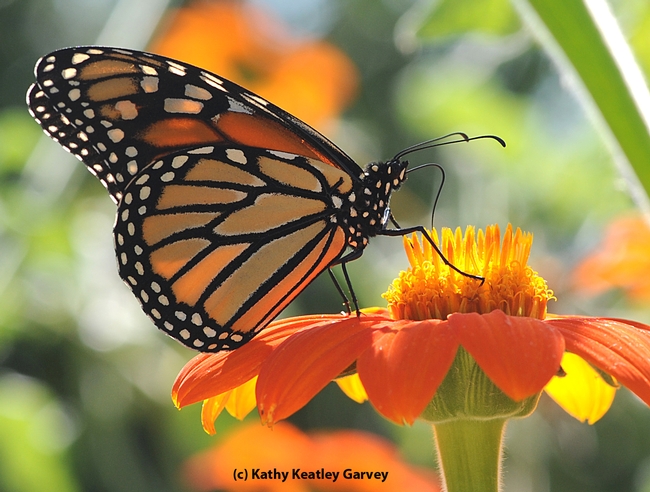 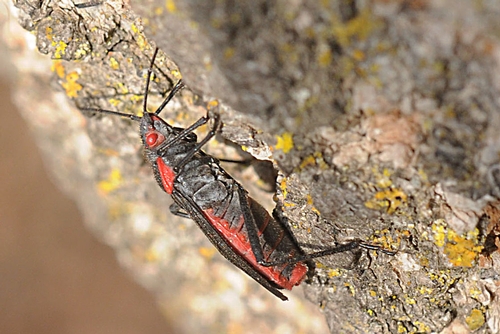