Like to know more about honey bees make collective decisions?

Mark your calendar to attend a seminar this week at the University of California, Davis.

Brian Johnson, assistant professor at the UC Davis Department of Entomology, will speak on "Organization of Work in the Honey Bee" from 12:10 to 1 p.m., Friday, Feb. 17 in 6 Olson Hall. This is part of the Animal Behavior Graduate Group's winter seminar series.

"I will be speaking on the role of self-organizing pattern formation mechanisms in biology using collective decision making in the honey bee as a case history," said Johnson, who joined the UC Davis Department of Entomology faculty last year. He received his doctorate in 2004 from Cornell University, Ithaca, N.Y. in behavioral biology. His UC Davis lab does research on integrative approaches to honey bee behavior, genetics, evolution, and health.

Seeley, author of Honeybee Democracy, says that honey bees "make decisions collectively--and democratically. Every year, faced with the life-or-death problems of choosing and traveling to a new home, honey bees stake everything on a process that includes collective fact-finding, vigorous debate, and consensus building."

Also on UCTV, you can listen to Johnson's UC Davis talk last October on How Bees Use Teamwork to Make Honey.

All three were webcast by professor James R. Carey of the UC Davis Department of Entomology. Carey strongly believes that research seminars from all 10 UC campuses should be recorded and posted on UCTV. He led the drive to make that happen. 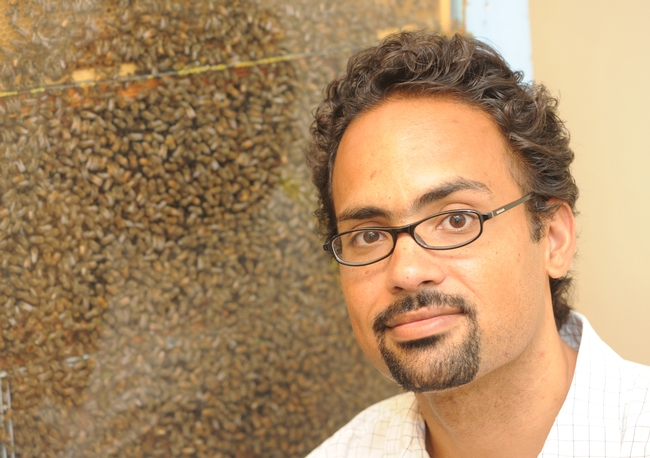 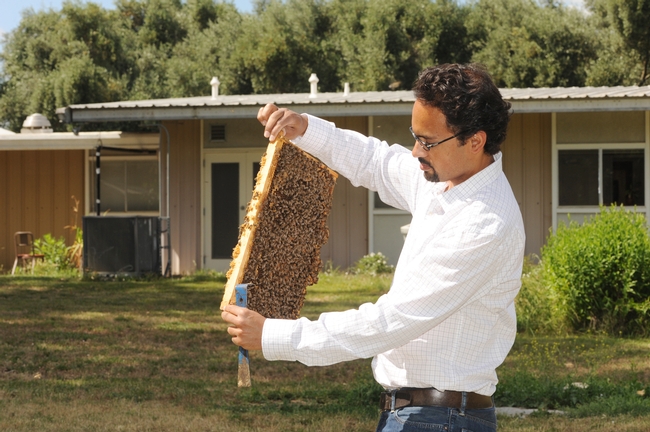 Melissa Heim of Martinez samples honey. (Photo by Kathy Keatley Garvey)
If you missed the Honey! event sponsored by the Robert Mondavi Institute for Wine and Food Science and held recently in the UC Davis Conference Center, not to worry.

James R. Carey, professor of entomology at the UC Davis Department of Entomology (the department co-sponsored the event), webcast the six talks presented by either current or retired UC Davis professors. The videos are now on UCTV; here's the link to the Honey! index page.

Carey is a firm believer that UC seminars ought to be shared with not only UC affiliates but with the general public. (Read about how and why he spearheaded the 10-campus project.)

Meanwhile, you can learn about bees from some of the country's best:  two UC Davis Department of Entomology faculty and one emeritus. Extension apiculturist Eric Mussen discussed "The Wonder of Honey Bees" and later presented a talk about honey and honey tasting.

Assistant professor Brian Johnson--he researches the behavior, evolution, and genetics of honey bees--covered "Honey Bee Communication: How Bees Use Teamwork to Make Honey" and emeritus professor Norman Gary, a scientist, author and professional bee wrangler, convinced us why we should consider "Hobby Beekeeping in Urban Environments." After all, he's been keeping bees for 64 years!

Then Louis Grivetti, professor emeritus in the nutrition department, strode to the podium to tell us "Historical Uses of Honey as Food"--you won't believe all the things he said in his well-researched talk!  Liz Applegate, nutrition professor and director of the Sport Nutrition Program," followed with "Sweet Success: Honey for Better Health and Performance."

By the end of the day, the crowd agreed with Mussen that “Honey bees are truly marvelous.” And with Johnson who pointed out: “Bees have small brains but can solve big problems."

A nice addition: a honey-tasting contest judged by the attendees. The winner? An oh-so-good clover honey from Sacramento Beekeeping Supplies. The honey (yes, it's available for sale at the 2110 X St. business), was produced by the Jones Bee Company, Salt Lake City. Second place went to Alan Pryor of Alameda; and third place, Diane Kriletich of Paloma, Calaveras County.

“It was a sweet day all in all,” said coordinator Clare Hasler-Lewis, executive director of RMI. 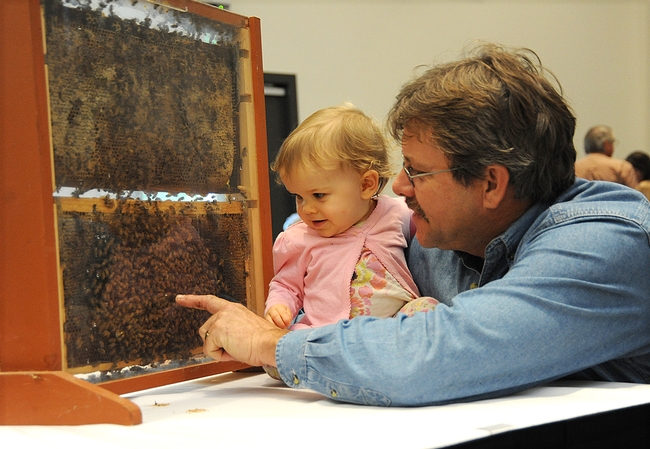 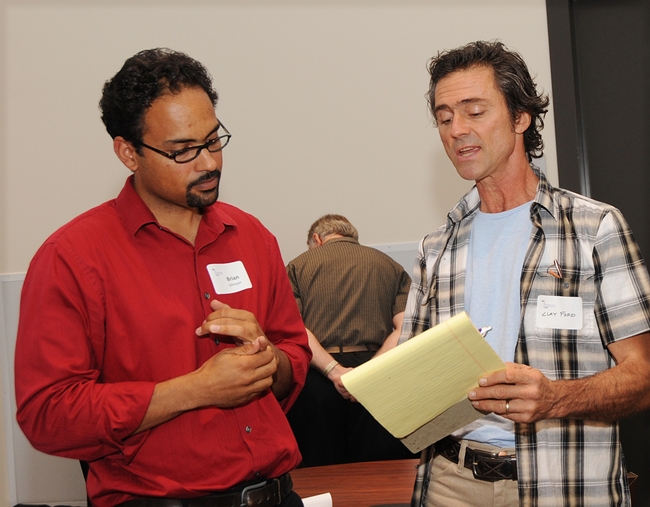 Brian Johnson specializes in the behavior, evolution, and genetics of honey bees, and apiculture
When the beekeepers and their affiliates gather today (Monday, Nov. 14) through Thursday, Nov. 17 in Rohnert Park for their annual convention, they'll be discussing the latest bee research, how to diagnose honey bee diseases, how to keep your bees healthy, and the importance of good bee breeding--the kinds of things they've been covering since their formation in 1889.

Today they're enjoying tours and a president's reception. Then Tuesday through Thursday, it's all business.  Or bees-ness.

Johnson who joined the UC Davis Department of Entomology last summer, will be introduced at the 9 a.m. session on Tuesday. He will speak at 11:15 a.m. on Wednesday: His topic  “Plans for UC Davis Bee Research Program.” Johnson specializes in behavior, evolution, and genetics of honey bees, and apiculture. (See lab research)

He holds a doctorate (2004) from Cornell University, Ithaca, N.Y. in behavioral biology (thesis: “Organization of Work in the Honey Bee”).

Extension apiculturist Eric Mussen, a member of the UC Davis Department of Entomology faculty since 1976, will speak on “The State of California Beekeeping” at 10:30 a.m. on Tuesday. He also will discuss on “Swarm Prevention” at 8:45 a.m. on Wednesday.The veteran bee guy serves as a liaison between the academic world of apiculture and the real world of beekeeping and crop pollination.

Cobey’s research focuses on identifying, selecting and enhancing honey bee stocks that show increasing levels of resistance to pests and diseases. Cobey developed the New World Carniolan stock, a dark, winter hardy race of honey bees, in the early 1980s by back-crossing stocks collected from throughout the United States and Canada to create a more pure strain. Stock imported from the German Carnica Association has recently been added to enhance this breeding program.

Cobey and entomology professor Steve Sheppard of WSU are importing honey bee germplasm to increase genetic diversity in the U.S. honey bee gene pool. In addition, with stock imported from the Republic of Georgia, they hope to re-establish the subspecies Apis mellifera caucasica, another dark race of bee that is not currently recognizable in the U.S.

The CSBA purpose is to "educate the public about the beneficial aspects of honey bees, advance research beneficial to beekeeping practices, provide a forum for cooperation among beekeepers, and to support the economic and political viability of the beekeeping industry.”

And that it does. It will be a busy week. 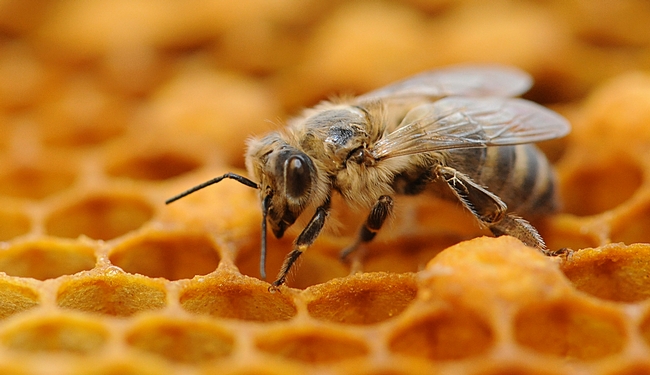 When beekepers from all over the Western states converge on the Western Apicultural Society (WAS) meeting in Hawaii next week, they won't be there to bask in the sun.

They'll be talking about beekeeping in Hawaii, alternatives to conventional beekeeping, new research, and colony collapse disorder and other colony losses.

The venue is nice, though: the Hapuna Beach Prince Hotel in Kamuela.

Extension apiculturist Eric Mussen of the UC Davis Department of Entomology will speak on “Current Beekeeping Problems: Disasters or Opportunities” on Tuesday, Sept. 13.

His talk will be well attended. Mussen, a five-time past president of WAS, has served as an Extension apiculturist with the UC Davis Department of Entomology since 1976. He writes the bimonthly Extension newsletter, from the UC Apiaries, considered one of the best and most informative in the industry, and Bee Briefs, both available free on the UC Davis Department of Entomology website.

Mussen, who received his doctorate in entomology from the University of Minnesota, educates the agricultural community, the beekeeping industry and the general public about honey bees.

Mussen co-founded WAS in 1978 as a non-profit, educational organization designed specifically to meet the educational needs of beekeepers from Alaska, Arizona, California, Colorado, Hawaii, Idaho, Montana, Nevada, New Mexico, Oregon, Utah, Washington and Wyoming; the provinces of Alberta, British Columbia, Saskatchewan, and the Yukon; and the states of northern Mexico.

As an aside--and back to the mainland--if you're into bees and honey, be sure to make reservations for the "Honey!" event set Friday, Oct. 21 in the UC Davis Conference Center. The event,  co-sponsored by the Robert Mondavi Institute for Wine and Food Science, the UC Davis Department of Enotmology, and the Julia Child Foundation for Gastronomy and the Culinary Arts, will include speakers, honey tastings and a honey-focused lunch.

Among the UC Davis entomologists speaking at the "Honey!" event will be Mussen, assistant professor Brian Johnson and emeritus professor Norman Gary, the newly published author of Honey Bee Hobbyist: The Care and Keeping of Bees and the co-founder of WAS.

Three bee scientists at the same place on the same day day--that's a honey of an event. 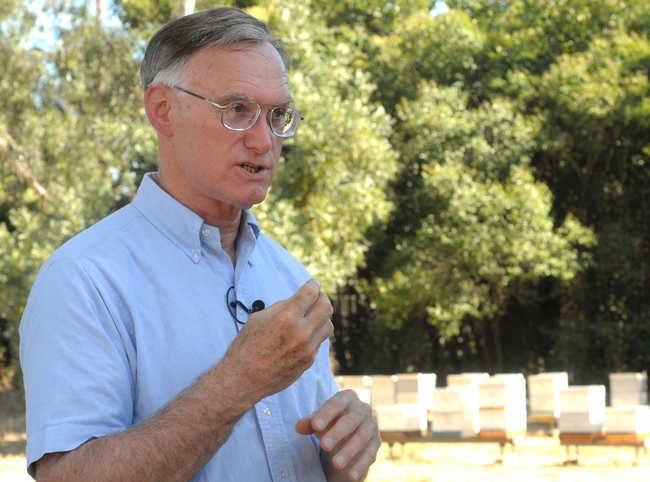 Eric Mussen will be a key speaker at the Western Apicultural Society conference in Hawaii. (Photo by Kathy Keatley Garvey) 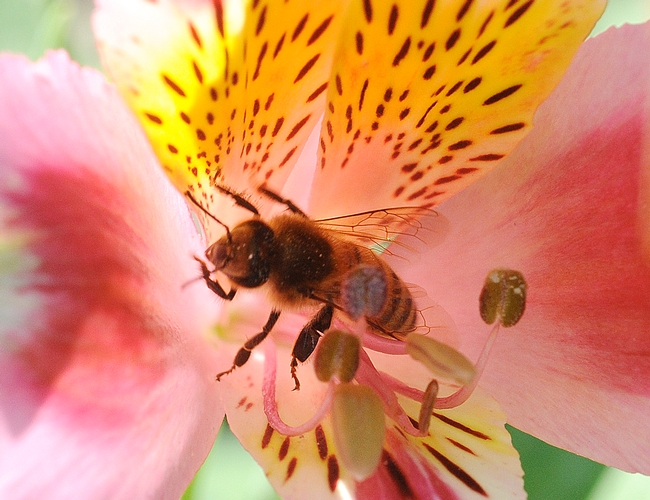 That very word summons a smile.

The event,  sponsored by the Robert Mondavi Institute for Wine and Food Science, will include tastings and a honey-focused lunch.

“Bees play a crucial role on our planet from pollinating to honey creation,” said Clare Hasler-Lewis, executive director of the institute, which is affiliated with the UC Davis College of Agricultural and Environmental Sciences.

The public is invited to “come celebrate with us and enjoy lectures, tastings and displays on honey,” she said.

The event is scheduled to include the history of honey and its use across the ages; honey as a food incorporating honey in your diet; and honey for health, from balancing blood sugar to wound healing.

Among the UC Davis speakers:

--Liz Applegate of the UC Davis Department of Nutrition faculty. A national expert on nutrition and fitness, she will discuss the health benefits of honey.

--Brian Johnson of the UC Davis Department of Entomology faculty. Johnson, who specializes in the behavior, genetics and evolution of honey bees, as well as apiculture, will explore the history of honey use across the ages.

--Extension apiculturist Eric Mussen of the UC Davis Department of Entomology. A nationally known expert on honey bees and honey, he will lead a honey tasting. 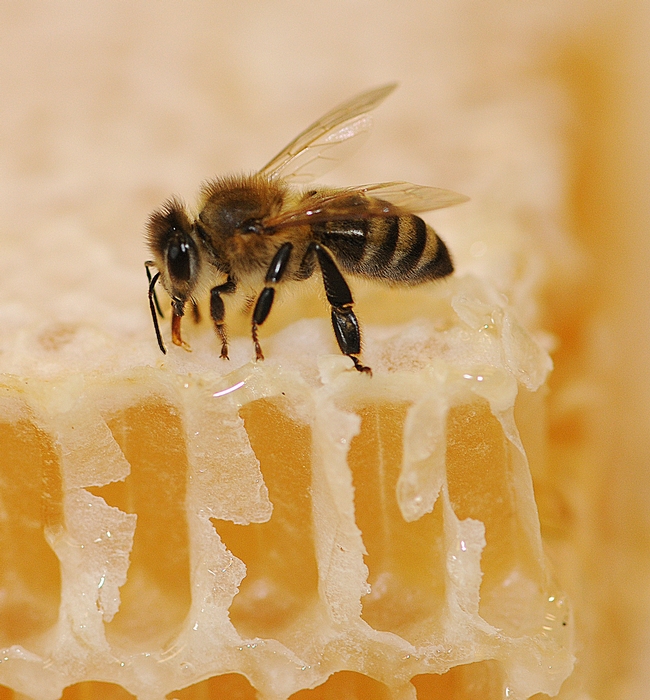 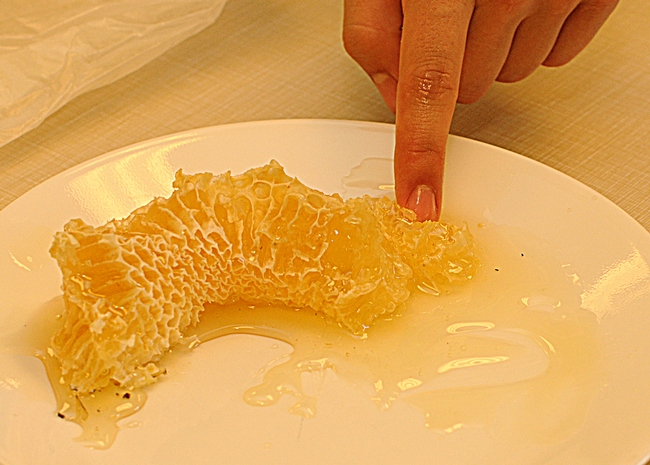