Bug Squad
sitenum=63
Happenings in the insect world
In the Pink: A Backyard Safari

You don't have to travel to Africa to go on safari.

You can go on a "bug" safari in your own backyard.

And you can stay as little or as long as you like without incurring such costs as air travel, hotel stays, and food expenses.

One honey bee was so heavily dusted with pollen that she could barely fly.

A fiery skipper skipped along, sipped some nectar, and then fluttered away.

Meanwhile, a pest, a spotted cucumber beetle, appeared. It was not on the desirable guest list, but it touched down anyway.

However, something about the proximity of the macro lens startled the uninvited guest and off it flew. 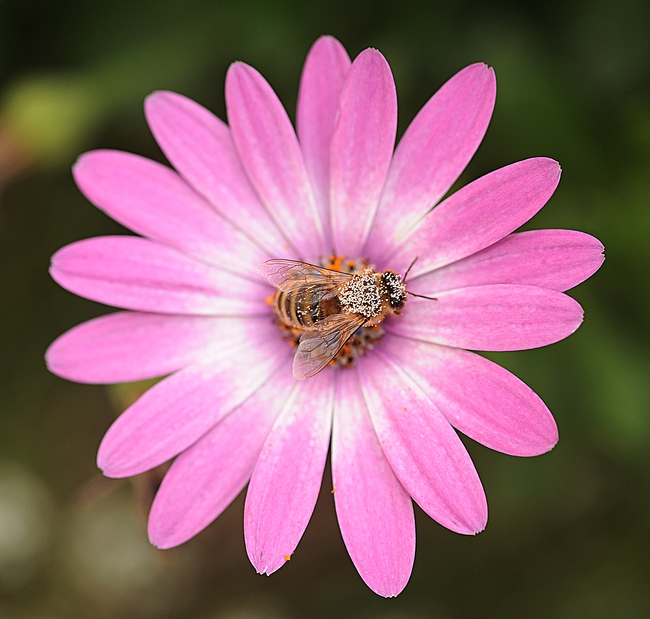 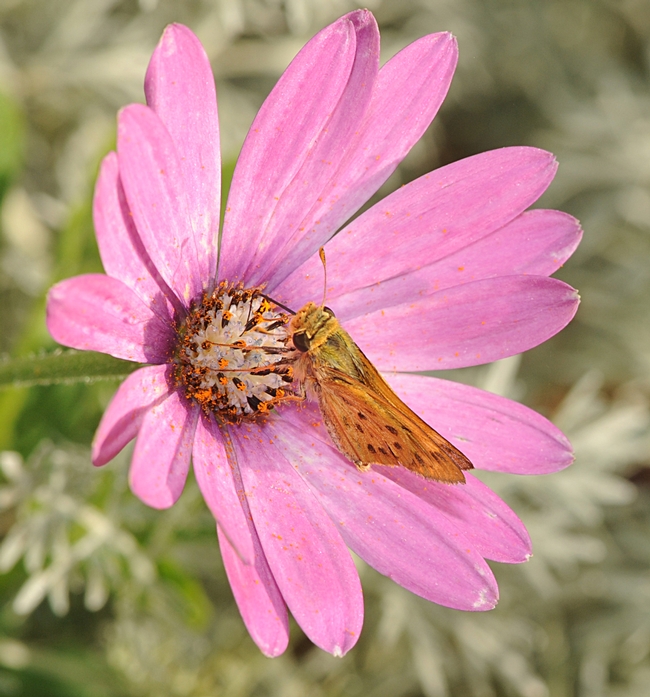 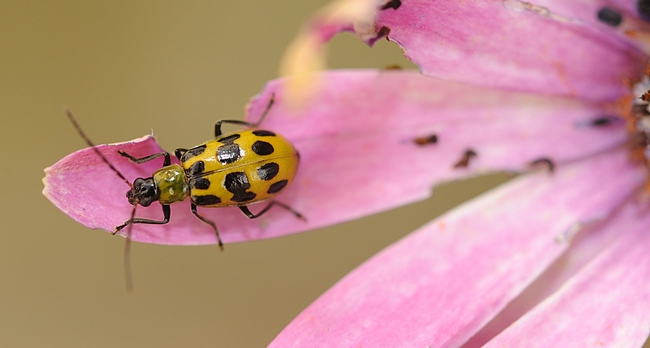 Yes, when a spotted cucumber beetle tries to share a sunflower with two honey bees.

That was the scene Sunday in a sunflower field along Pedrick Road, Dixon, Solano County.

The spotted cucumber beetle is a pest. Honey bees are beneficial.

It was a bucolic scene: blue skies, golden sunflowers, scores of honey bees....and a few pests. 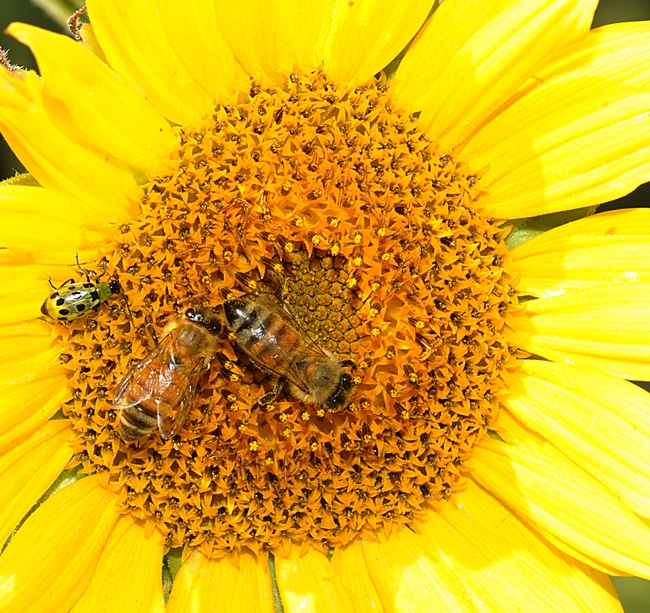 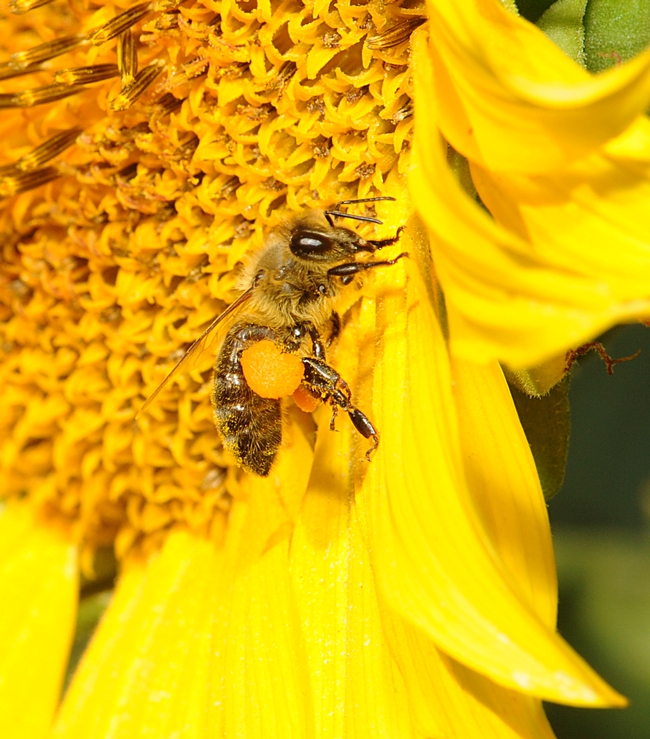 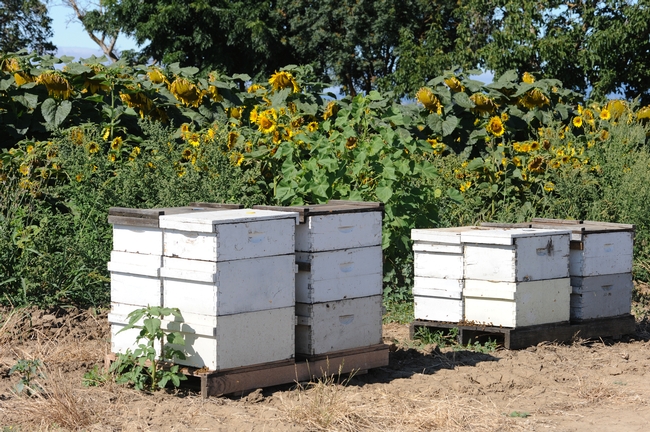 Published on: August 18, 2010
Gardeners pinch them. Photographers shoot them. Hikers wonder what they are.

The spotted cucumber beetle (Diabrotica) is a major agricultural pest. You'll see it on cucumbers, squash, corn, beans, watermelons, musk melons, cotton, tomatoes and other crops.  You'll see it on ornamentals, too, including roses, dahlias, agapanthus and zinnias.

In its larval form, it's known as the southern corn rootworm. The larvae feed on roots and stems, and the adults, on foliage, pollen and flowers. The adults burrow into the corn ear tips and chew on the corn silks.

When hiking last week in the cliffs above Timber Cove, Sonoma County, we spotted scores of spotted cucumber beetles. They were foraging on dandelions, seaside daisies and the California state flower, the golden poppy.

Seemed like every other flower harbored a spotted cucumber beetle. Or two.

Its predators, including tachnid flies, soldier beetles, lacewings and ladybugs, were no where in sight. 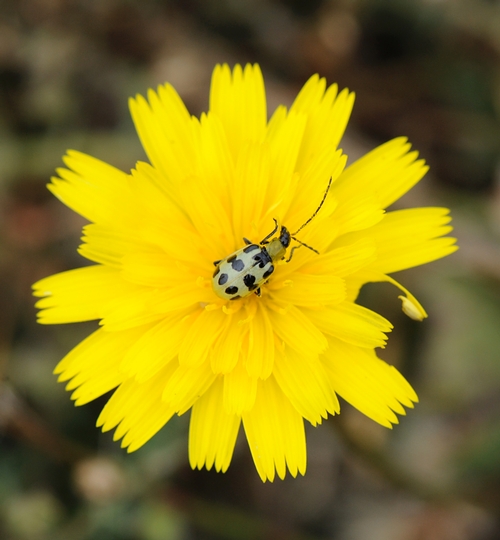 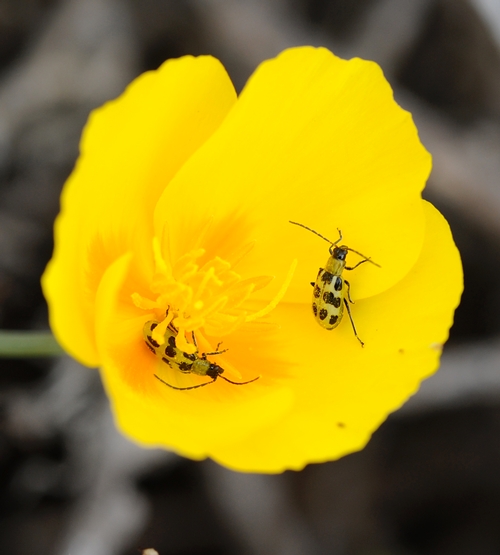 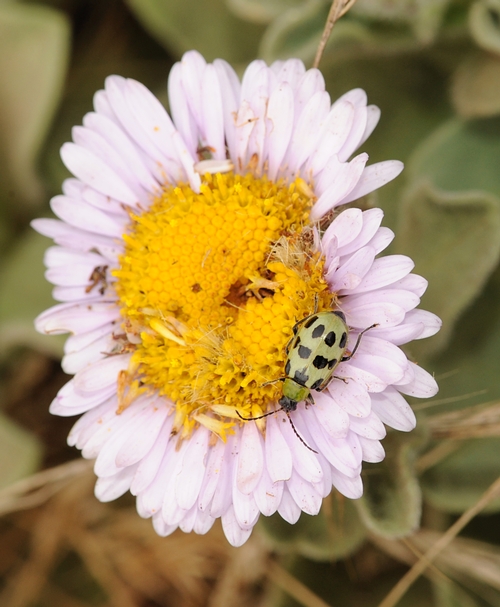 The movie, "Sideways," has nothing on a spotted cucumber beetle climbing up, down and sideways on a rock purslane.

The spotted cucumber beetle is a pest, while the rock purslane has to be among the world's most beautiful flowers. (And also very attractive to insects.)

The 2004 movie is about two guys on a life-altering journey through the wine country of Napa. They drank copious amounts of the adult beverage.

The spotted cucumber beetle was just feeding on nectar, the insect's version of wine. 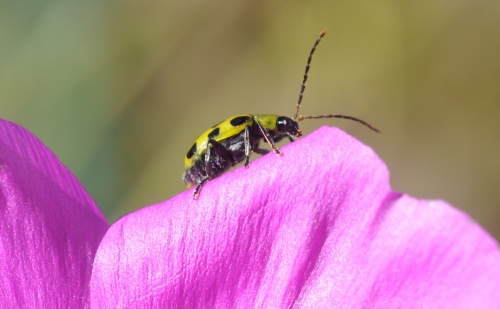 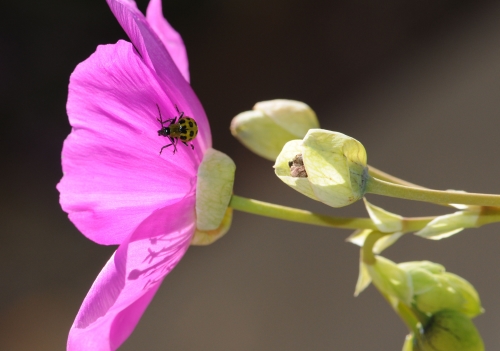 A hover fly landed on a blossom, only to find a spotted cucumber beetle there first. 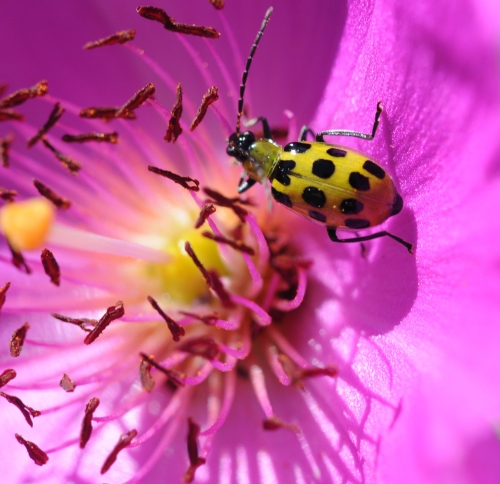 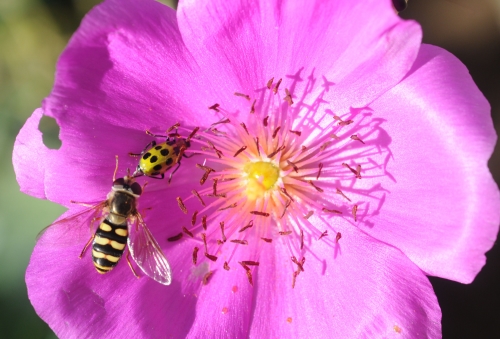