Bug Squad
sitenum=63
Happenings in the insect world
As Tiny as a... Sweat Bee

If you like to take photos of insects that are as small as a grain of rice, then you'll love--absolutely love--stalking a sweat bee.

Sweat bees, members of the worldwide family Halictinae and order Hymenoptera, are so-named because they are attracted to human perspiration or "sweat."  They probably lap up perspiration because of the salt content, according to Christopher O'Toole and Anthony Raw, authors of Bees of the World.

The most important of the many genera, the authors say, are Halictus and Lasioglossum, which are common to both the Old World and New World.

Speaking of common, Halictus is also common in bee friendly gardens and swimming pools. Ever gone for a swim and feel a tiny insect sting you? It may have been a sweat bee. ("Their sting is only rated a 1.0 on the Schmidt Sting Pain Index, making it almost painless," according to Wikipedia.)

O'Toole and Raw point out that some sweat bees are only 4mm long, which is why they can be easily overlooked and so difficult to identify.

What's unique are about these ground-nesting bees? The females of all species of sweat bees mate before winter. "This means that, unlike female solitary bees of other families, those of halictids do not have to mate before founding a nest in the spring," they write.

She was nectaring a tower of jewels (Echium wildprettii) in our yard and packing a heavy load of blue pollen she'd gathered from the plant. 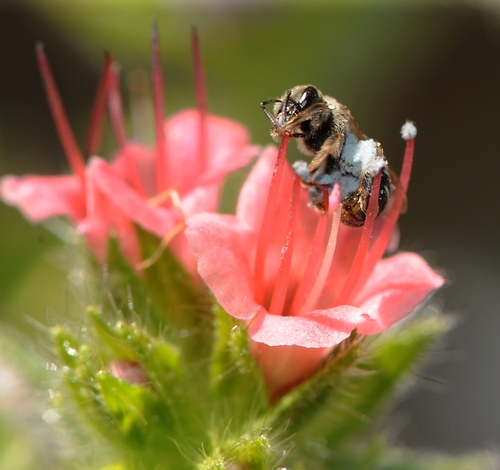 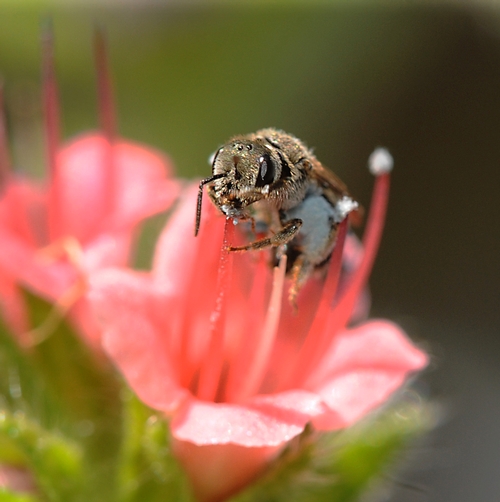 Close-Up
CLOSE-UP of a female sweat bee, Halictus tripartitus, as identified by native pollinator specialist Robbin Thorp, emeritus professor of entomology at the University of California, Davis. This one is nectaring on a tower of jewels. (Photo by Kathy Keatley Garvey) 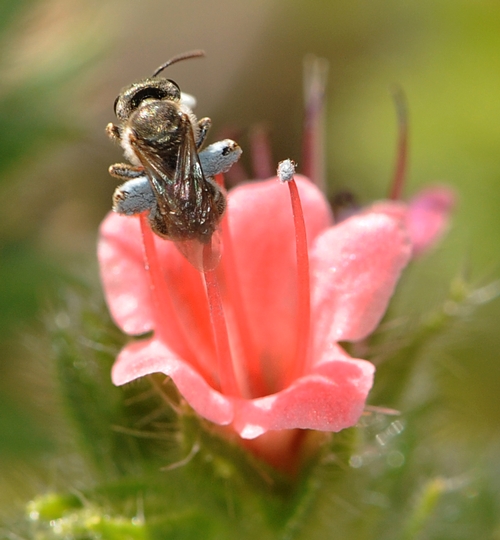 Every insect looks prettier when it lands on a tower of jewels (Echiium wildpretti).

When in full bloom, the 9-to-10-foot-high plant, native to the Canary Islands, blazes with firecracker-red flowers. It's a showstopper.

The flower flies flit in and out of the blossoms, barely visible.

However, these insects suffer from an identity crisis. Their wasp-like coloring wards off predators. That same coloring confuses people, too. The average person on the street--or in a flower bed--thinks they're bees.

They're not. They're flies.

Not bees. Not wasps. Flies. 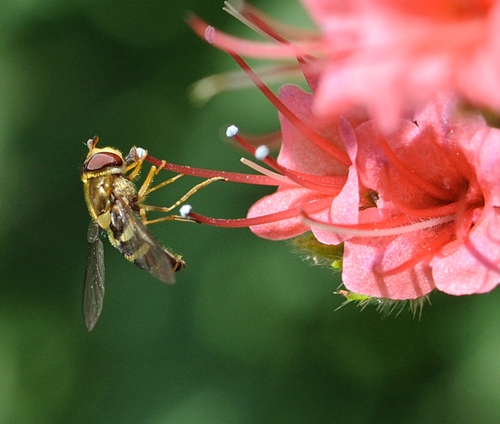 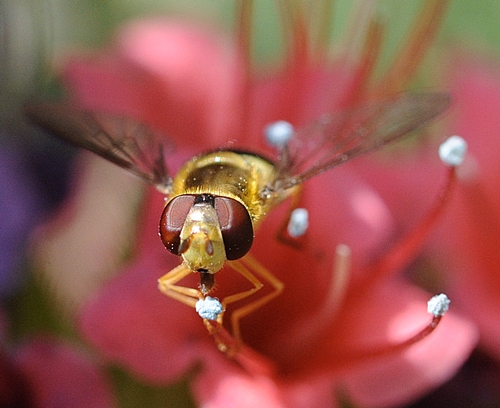 It wasn't an itsy bitsy spider.

And it didn't climb up the water spout.

It was climbing all over the tower of jewels, ready to stalk and pounce on prey.

We spotted this male jumping spider in the genus Phidippus (as identified by Lynn Kimsey, director of the Bohart Museum of Entomology at UC Davis) cruising the interstate of a nine-foot-high tower of jewels (Echium wildpretii).

The tower of jewels is a bee-friendly plant, but it's also spider-friendly.

The eight-eyed jumping spider (four large eyes on its face and four smaller eyes on top of the head) is considered an excellent predator because of its keen eyesight and amazing speed.  Although it's only about two centimeters (less than 0.8) long, it  can jump about 40 to 50 times its length. It's distinguished, too, by its iridescent green chelicerae or mouthparts.

The kneeling photographer and the jumping spider went eye to eye--well, two eyes versus eight eyes--and then the spider crawled under a stem.

I was hoping it would jump. 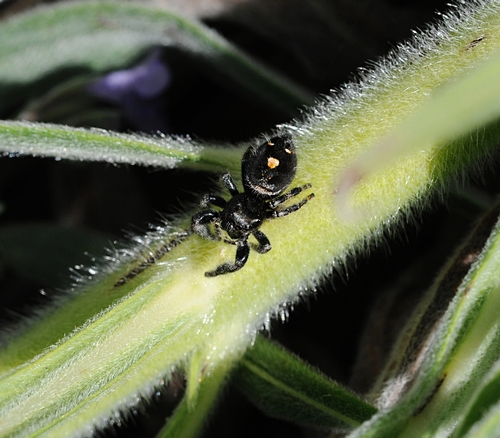 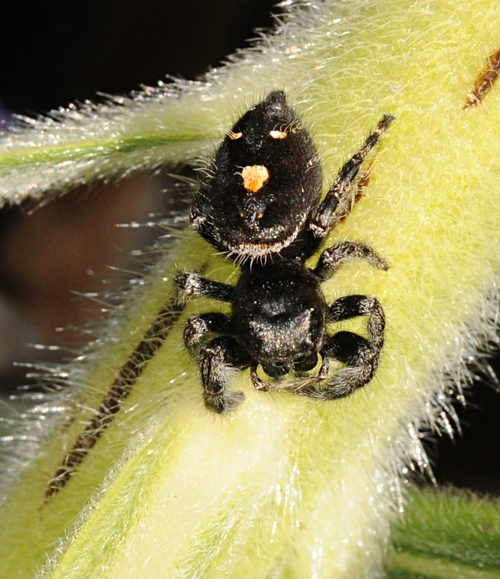 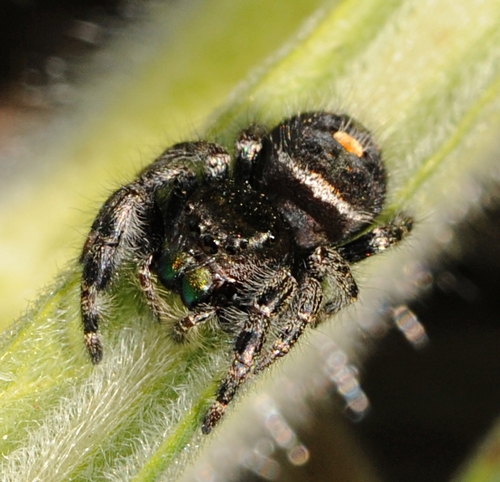 This spectacular plant attracts bees like a honey-laden hive does hungry bears.

The tower of jewels (Echium wildprettii), native to the Canary Islands, is a biennal; it flowers only in the second year and then dies. So, for the first year, it looks quite insignificant. The second year: it shoots up an amazing nine or 10 feet, ablaze with blossoms the color of rubies.

If you ever see a tower of jewels blooming, you'll remember it. One bloomed last year in the Storer Garden in the UC Davis Arboretum. it drew scores of visitors toting cameras.

Visitors to the haven will see the "tiny" Echiums during the public opening on Sept. 11. They won't see the regal beauty unfold until 2011.

Meanwhile, we're savoring the three towers in our own bee friendly garden. So are the honey bees, hover flies, bumble bees, carpenter bees, butterflies and hummingbirds.

The scouts (bees) arrive as soon as the temperature hits 50 degrees. Then they head back to their hives to alert the foragers. You can almost hear them Waggle-Dancing: "Fine quality, large quantity--hurry, hurry!" By mid-morning, the towers are abuzz with bees. By mid-afternoon, the bees sound like jet engines.

A tower of bees. 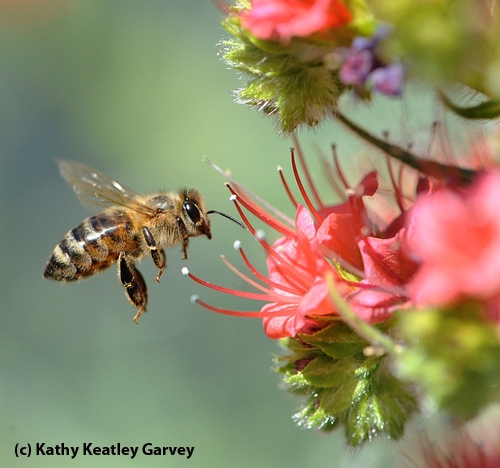 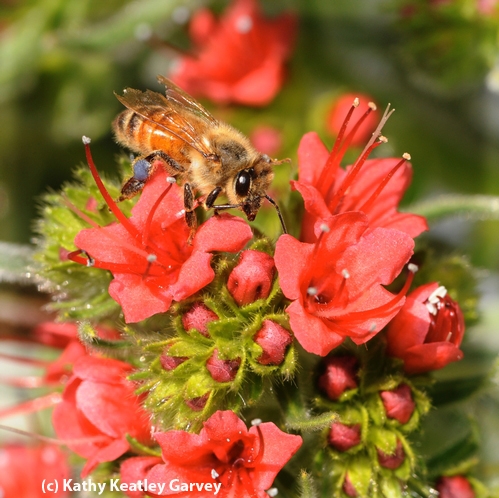 LADY IN RED--A honey bee amid the bright red blossoms of the tower of jewels. Note the blue-gray pollen from the plant on her leg. (Copyrighted Photo by Kathy Keatley Garvey) 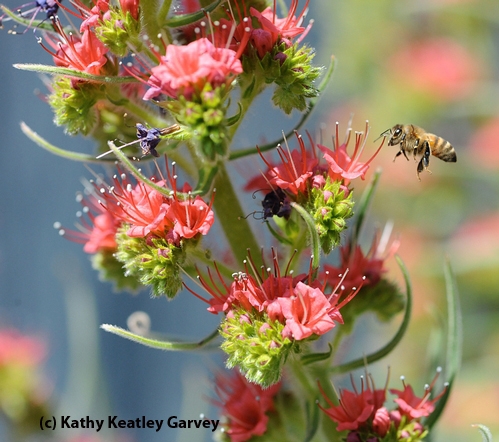 Everybody loves a bumble bee.

And especially a queen.

One of the bumble bees: a regal queen.

When Picnic Day ended, they kindly let me take her home to our tower of jewels (Echium wildprettii), a biennial plant that looks somewhat like a red-jeweled Christmas tree. "Tower of jewels" is indeed a fitting name. It towers (nine-feet high) and it sparkles like rubies.

We placed the lethargic queen on a blossom and fed her honey for quick energy. She quickly sipped about an eighth of a teaspoon, buzzed me twice (Hey, I'm your friend!), returned for more honey, and then took flight.

The queen circled the plant twice and was gone.

From the Bohart Museum display to a showy tower of jewels--all in one day. 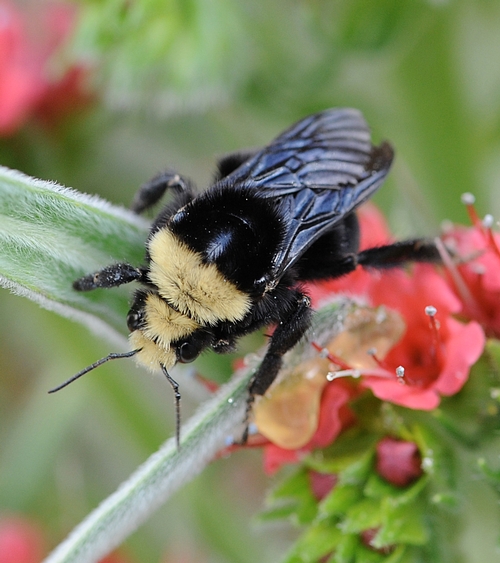 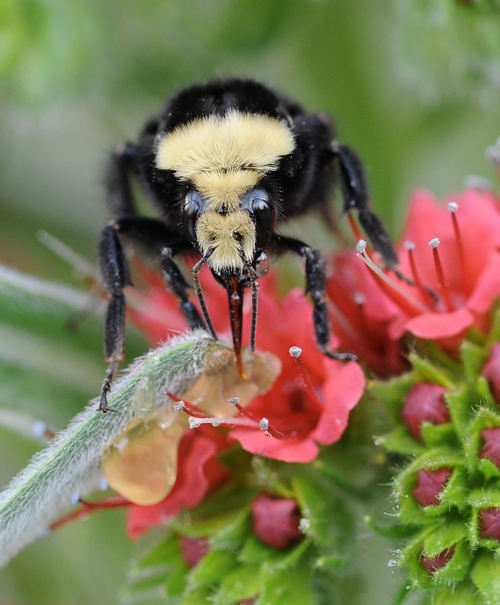 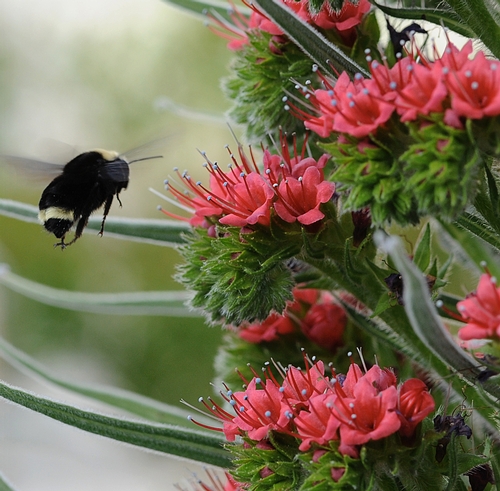