Bug Squad
sitenum=63
Happenings in the insect world
Saving the Bees, One Shirt at a Time

The newly planted haven is a half-acre bee friendly garden designed to provide a year-around food source for honey bees and an educational experience for human visitors. By spring, it will be well-established and in full bloom.

And the T-shirt? Nakanishi served as the artist, and Keller, the designer.

Nakanishi, a Bohart student employee for the past three years, plans to become a veterinarian.

Keller's Ph.D. work involves tenebrionids or darkling beetles. She studies with major professor Lynn Kimsey, director of the Bohart and professor and vice chair of the Department of Entomology.

In her "spare" time, Keller has created a number of insect posters and T-shirts, all available at the museum.

The bee shirt, which comes in black or yellow, is receiving scores of accolades. "Cute!" is one of them.

The front says "Save the Bees" and is inscribed with the Laidlaw facility name. The back features a photo (taken by yours truly) of a newly emerged bee tucked inside the line drawing of a hive. It is lettered with "Follow me to the Honey Bee Haven Garden!"

Keller said the shirts will sell for $20 for adults and $15 for youths, and range in size from 2XL to small for adults, and XS to large for youths.

All proceeds are earmarked for honey bee research at UC Davis. The shirts are available at the Bohart Museum, 1124 Academic Surge, UC Davis campus, or by accessing the Bohart Web site. 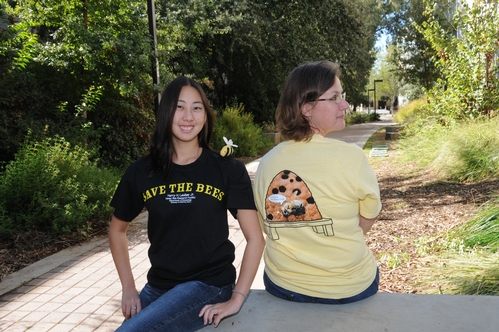 Saving the Bees
SPORTING the new honey bee t-shirts they created to raise funds for honey bee research at UC Davis are Nanase Nakanishi (left), an animal science major and a student employee at the Bohart Museum of Entomology, and Fran Keller, a doctoral student in entomology. Nanase models the front, and Fran, the back. (Photo by Kathy Keatley Garvey) 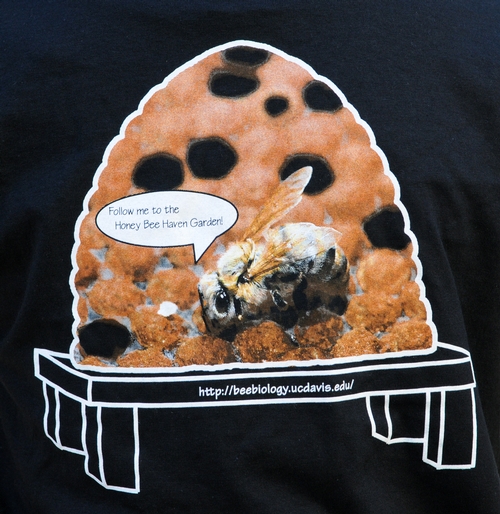 The dull brown moth may be dull-looking but as noctuid cutworms they're not.

We spotted this noctuid cutworm, soon to be a dull brown moth, last week on a yarrow in the Storer Gardens at the University of California, Davis.

You're likely to see these moths flying around at night, attracted to your porch light.

Another place you can see these moths--as specimens--is the Bohart Museum of Entomology, 1124 Academic Surge, on the UC Davis campus. Directed by Lynn Kimsey, professor and vice chair of the department, the Bohart Museum houses some seven million insect specimens--and a few live ones, such as Madagascar hissing cockroaches. Yes, they give tours. Contact Tabatha Yang at tabyang@ucdavis.edu.

What's really interesting about the noctuids is that they have auditory organs that are capable of detecting frequencies from 3 to more than 100 kilocycles per second.  This can save them from being bat prey.

Bats, you see, emit high-pitched chirps as they fly around at night seeking prey and avoiding obstacles. The chirps bounce back or echo, enabling them to maneuver in complete darkness.

When the dull brown moths hear the chirps, they fold their wings and drop to the ground.

Three kilocycles (3000 cycles) per second is in the top octave of the piano; the average upper limit of hearing in humans is about 15 kilocycles per second. (Source: An Introduction to the Study of Insects by Donald Borror and Dwight DeLong, former entomologists at Ohio State University) 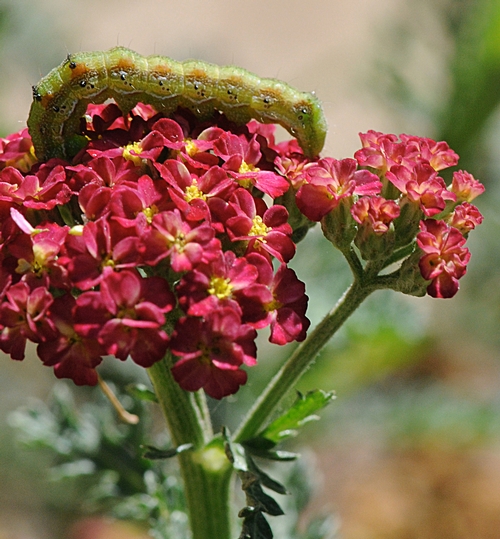 Dianne DiBlasi did it.

Back in January, we wrote a Bug Squad blog about Dianne DiBlasi’s three-year effort to overturn an Allendale, N.J. ban on backyard beekeeping.

DiBlasi, who leads a group of teen environmentalists known as Team B.E.E.S. (Bergen Environmental Effort to Save Bees) and is a member of the the New Jersey Beekeepers' Association, simply wanted the Allendale Council to remove bees from the city’s list of “banned and dangerous animals” and allow non-commercial beekeepers to keep their bee colonies in their yards.

On Oct. 14, the Allendale Council unanimously voted to lift the bee ban.

This is good news indeed. It shows what one person, with help of her friends and fellow beekeepers, can do to overturn an ordinance that needed overturning.

Of course, the lifting of the bee ban comes with restrictions, such as the number of hives within a certain area. There are also requirements such as notifying the neighbors within 200 feet of any property line (if a neighbor protests, no beekeeping), protecting the area with a fence at least six feet high, licensing the hives with the Allendale officials, registering with the New Jersey apiarist, and the like.

But she did it!

DiBlasi graciously thanked the entire council for their support. "I promise you that you will be amazed at your flower gardens and vegetable gardens. Give me two years."

We suspect it will be a lot less. 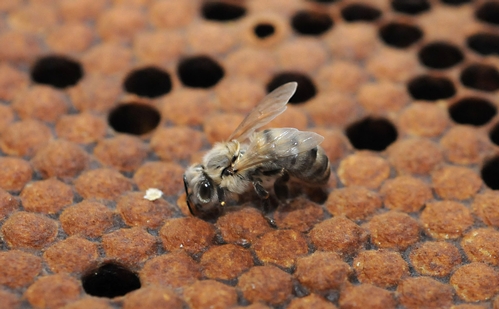 Honey bees are involved in a unique "sting operation" utilizing their sense of keen smell to detect explosives and narcotics.

And now a scientist from the Los Alamos National Laboratory, New Mexico, will talk about the project on Wednesday, Oct. 21 on the UC Davis campus.

Robert Wingo, with the Chemical Diagnosis and Engineering of the Chemistry Division, will speak on “Explosives and Narcotics Detection by Monitoring of the Proboscis (Tongue) Extension Reflex in Apis mellifera (Honey Bee)" at 4 p.m., in 357 Hutchison Hall, UC Davis.

The one-hour event is sponsored by the UC Davis Department of Plant Pathology.

Wingo's lecture will be Webcast live as part of the pilot UC Seminar Network, which is Webcasting scientific seminars on three UC campuses: Davis, Berkeley and Santa Cruz.  Viewers can link to it.

What's the honey bee project all about?

In a news release issued Nov. 27, 2006, Los Alamos National Laboratory (LANL) news writer Todd Hanson wrote that scientists at LANL “have developed a method for training the common honey bee to detect the explosives used in bombs. Based on knowledge of bee biology, the new techniques could become a leading tool in the fight against the use of improvised explosive devices, or IEDs, which present a critical vulnerability for American military troops abroad and is an emerging danger for civilians worldwide.”

“By studying bee behavior and testing and improving on technologies already on the market,” Hanson wrote, “Los Alamos scientists developed methods to harness the honey bee's exceptional olfactory sense where the bees' natural reaction to nectar, a proboscis extension reflex (sticking out their tongue), could be used to record an unmistakable response to a scent. Using Pavlovian training techniques common to bee research, they trained bees to give a positive detection response, via the proboscis extension reflex, when they were exposed to vapors from TNT, C4, TATP explosives and propellants.”

The bee’s phenomenal sense of smell rivals that of dogs, according to Tim Haarmann, then principal investigator for the Stealthy Insect Sensor Project.

More information is available from the LANL news release.

LANL, a self-described "multidisciplinary research institution engaged in strategic science on behalf of national security," is operated by Los Alamos National Security, LLC, a team comprised of Bechtel National, the University of California, The Babcock & Wilcox Company, and the Washington Division of URS for the Department of Energy's National Nuclear Security Administration. 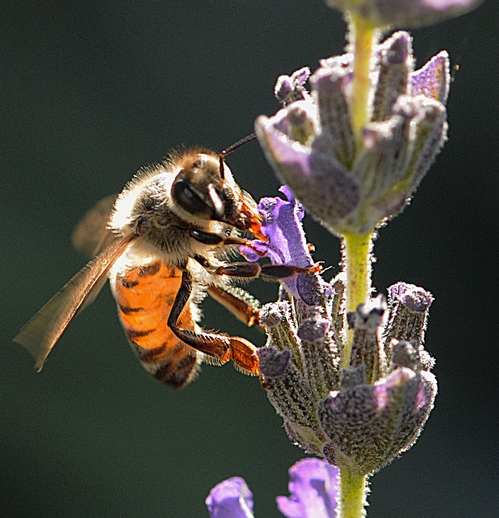 Drones--remotely piloted aircraft used in reconnaissance and target attacks--are in the news, but so are the other drones--male bees.

This time of year drones are as scarce as the proverbial hen's teeth. They're not needed in the hive now--just extra mouths to feed--so their sisters are booting them up. They're basically evicted, cold and shivering, from the hive.

It's best to be a drone in the spring. When a virgin queen goes for her maiden flight, a group of drones will mate with her in the drone congregation area. The drones die shortly after mating. If they don't mate, then they'll die before winter sets in.

As Extension Apiculturist Eric Mussen of the UC Davis Department of Entomology faculty says: First the sisters stop feeding their brothers so they're easier to push out.

Then, out they go.

The sisters have no pity. 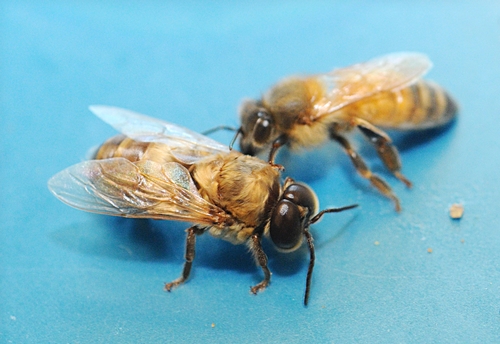 Drone and worker bee
NEWLY EMERGED: a drone (male bee) is the foreground. In the background is a worker bee (infertile female). They're one day old in this photo. (Photo by Kathy Keatley Garvey) 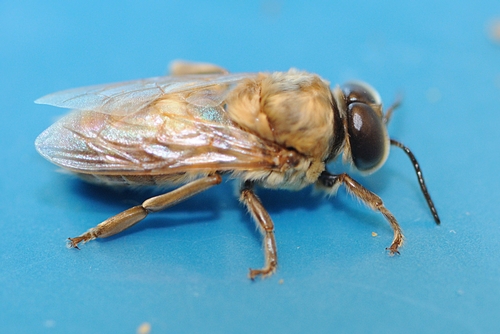 Big Eyes, Bulky Body
DRONES are easy to spot in the hive by their big eyes and bulky body. This drone is one day old. (Photo by Kathy Keatley Garvey) 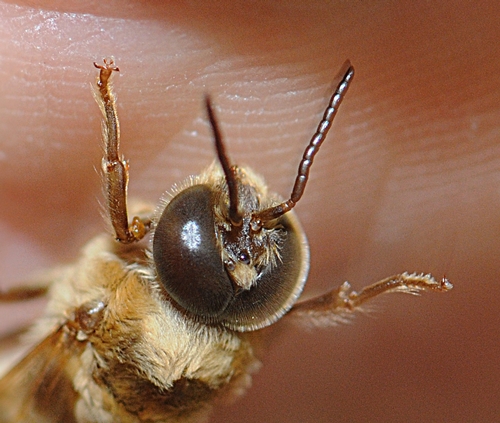