A spider web is nature's lace, a symmetrical work of wonder.

Well, a sticky, deadly trap if you're an insect. Then you become just another tasty morsel for the predacious, albeit artistic, spider.

Watching an orb weaver or garden spider maneuver a web is like watching a circus acrobat glide from one silken rope to another.

The finished product--a combination of delicacy and strength--looks like the needle lace doily that your great-grandmother crafted for her parlor chairs.

Sure, some folks hate spiders and every time they see one, they gasp in horror or harbor thoughts of spidercide.

Me, when I see one, I spray a little water to highlight the art. Then I grab the camera.

Fact is, you should welcome garden spiders into your garden and let them "put a spin on it." These little arachnids will snare such insects as flies, gnats and mosquitoes.

Charlotte, where are you? 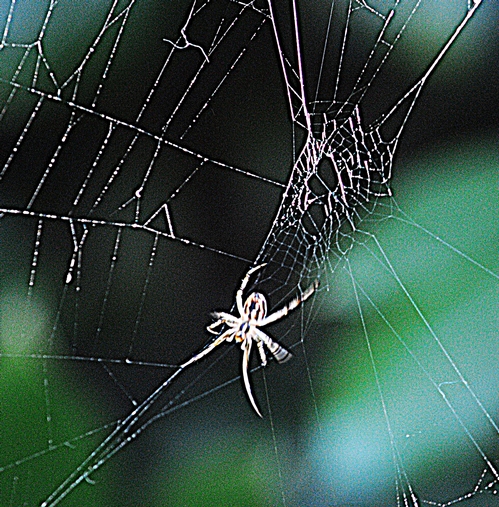 Web Weaver
ORB WEAVER at work. The end product is nature's lace and an engineering feat, and, if she's lucky, a feast tonight. (Photo by Kathy Keatley Garvey) 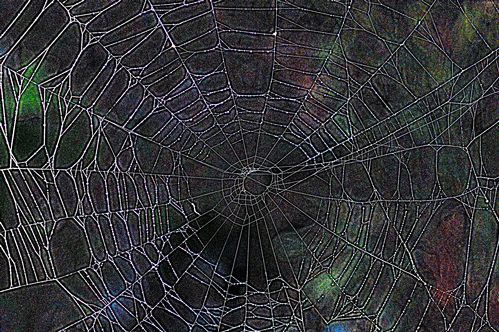 Catching up with the carpenters is not always easy.

Not the construction workers--the carpenter bees.

They move fast as they buzz from flower to flower.

You can find Xylocopa varipuncta in the Central Valley and southern California, Arizona, New Mexico and southward through Mexico. It is large  (about the size of a queen bumble bee). The females are all black, while the miles are golden/buff-colored with green eyes. The males are commonly known as "teddy bears."

X. californica is right at home in the foothills surrounding the Central Valley, the Transverse Ranges (Los Angeles) of southern California, and areas of Utah, Colorado, New Mexico and Arizona. They are large, nearly the size of X. varipuncta, but with distinctive bluish metallic reflections on their body.  Females have dark smokey brown wings.

X. tabaniformis orpifex resides in most of the same areas as X. californica, but extends more into the center of the Central Valley.  It is the smallest of the three species--about half the size of the other two carpenter bees. Females are all black with light smokey-colored wings.  The males have light yellow hair on their face and thorax.

Carpenter bees, so named for their ability to tunnel through wood to make their nests,  carve with their mandibles (jaws) but do not ingest the wood.

“Carpenter bees are beneficial in that they pollinate flowers in native plant communities and gardens. That far outweighs any damage to wood structures.”

“These bees are not currently managed for crop pollination,” Thorp said, “but there have been some recent studies of their potential for pollination of greenhouse tomatoes. They are good at buzz pollination and can be managed by providing suitable nest materials.”

Due to their large size, carpenter bees cannot enter tubelike blossoms such as sage, so they slit the base of corolla, a practice known as “robbing the nectar” (without pollinating the flower).

We caught up with two carpenter bees (below) robbing nectar. 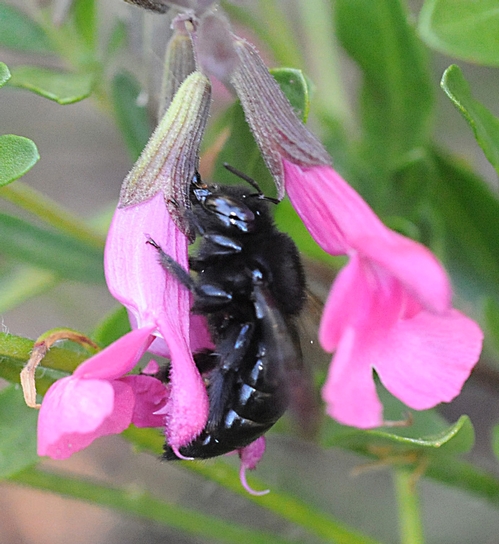 Thar’s gold in them thar hills.

If you visit the Sonoma County coastal town of Bodega Bay, and drive up to Bodega Head overlooking the ocean, you’ll see a carpet of gold flowers known as coastal goldfields or Lasthenia minor.

And you’re certain to see bumble bees nectaring those flowers.

Goldfields are natives and so are bumble bees. Goldfields belong to the Asteraceae family, also known as the aster, daisy or sunflower family.

Want to learn more about bumble bees? Bumble bees are very much in the news. Thorp wrote a piece for a UC Berkeley publication. He recently addressed the Smithsonian Institute on the plight of the Western bumble bees and gave a Webinar at the UC Davis Department of Entomology on Franklin's bumble bee, an insect he fears may be extinct. 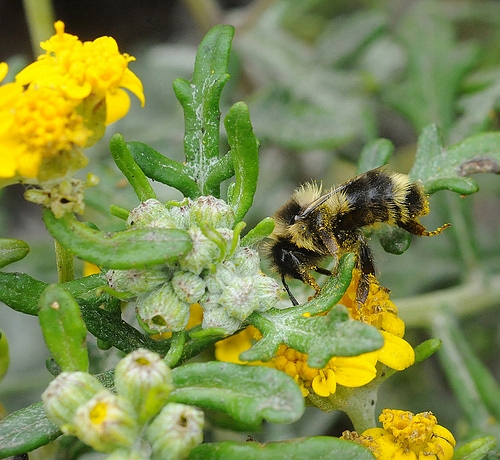 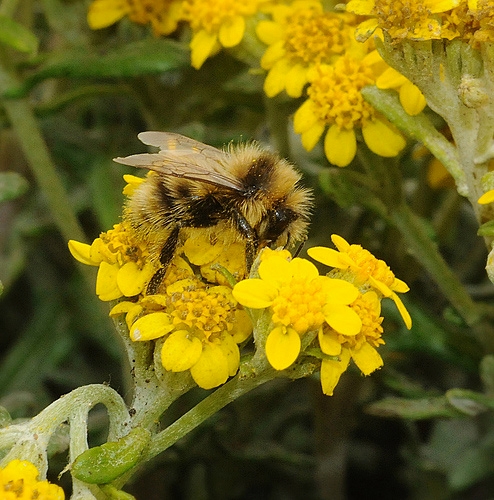 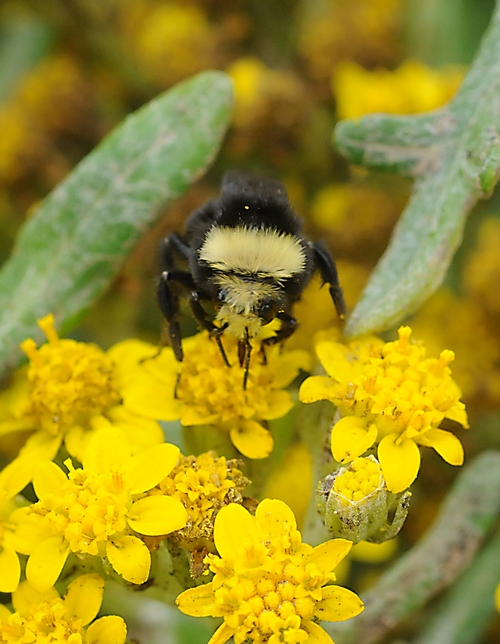 The Eyes Have It
THIS BUMBLE BEE, a worker or female bee, is a Bombus vosnesenskii, the most common bumble bee at Bodega Bay. She is nectaring coastal goldfields (Lasthenia minor), a native wildflower. (Photo by Kathy Keatley Garvey)
Tags: Bodega Bay (11), Bombus bifarius (1), Bombus vosnesenskii (43), bumble bees (52), coastal goldfields (1)
Comments: 0
Hail to the Queen

Her Royal Highness (HRH) is quite pampered. She's always surrounded by her royal attendants, called the retinue. They tend to her every need. They feed and groom her. They keep her warm or cool, depending on the temperature inside the hive.

They know it's her and not an imposter. Her Excellency releases a pheromone (chemical) that identifies her.

The retinue--with attendants circling the queen--reminds me of a NFL quarterback huddle. Form a tight-knit circle. Strategize. Criticize. Motivate. Win the game. Celebrate.

The queen bee, however, is no quarterback.

Ever seen a "classic retinue" photograph? Bee breeder-geneticist Susan Cobey, manager of the Harry H. Laidlaw Jr. Honey Bee Research Facility at UC Davis, shared this photo (below). Note that ALL the royal attendants are facing her, which is what makes this a "classic retinue" instead of a your basic everyday retinue.

Hail to the queen.

But the real salute, the real applause, the real credit, should go to the workers.

They do all the work. 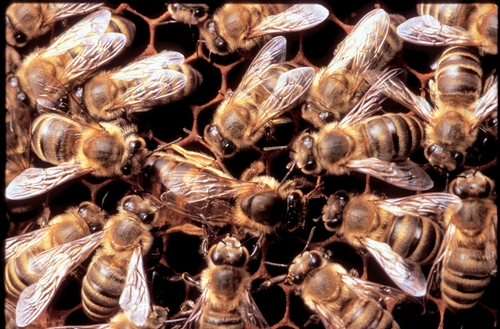 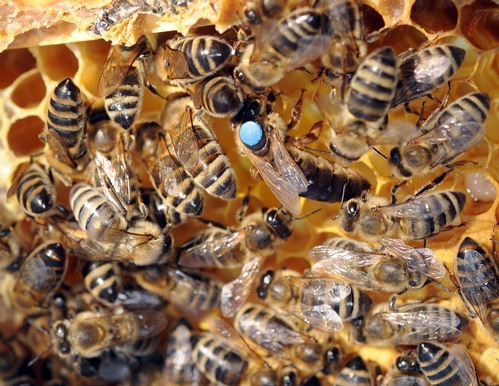 The cabbage white butterfly (Pieris rapae) looks like a Lady in White when she perches on catmint.

The colors are striking: A long, flowing white gown nestled among the rich lavender blossoms and earthy green leaves.

UC Davis Butterfly expert Art Shapiro says this insect flies an average of 44 weeks of the year in the Davis-Sacramento area. It seems to particularly love the catmint in our garden.

Last night, however, it was flying in our kitchen.

There is no catmint in the kitchen.

There is only a cat.

The confused butterfly probably entered the kitchen through an open door--or the cat door.

My mission: Rescue the butterfly bouncing around in the kitchen and let it go before the cat, aka Xena the Warrior Princess, developed a culinary interest in it.

Back to the catmint it went. I  did not take it to Shapiro and ask "Did I win?"

You see, every year Shapiro sponsors a cabbage white contest in the Davis-Sacramento area. The first person who delivers a cabbage white to him, starting the first of the year, wins a pitcher of beer. The contest always ends in January or February.

"Almost every year," he says, "someone brings one in May or June and asks 'Did I win?'"

No losers this time, though. The Lady in White won.

She won the how-to-get-out-of-the-kitchen-unscathed-and-back-to-the-catmint contest. 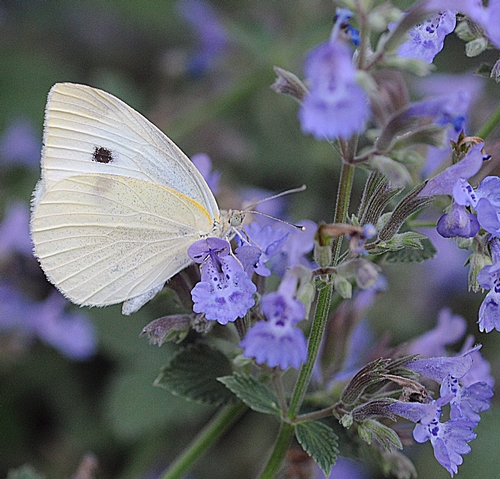