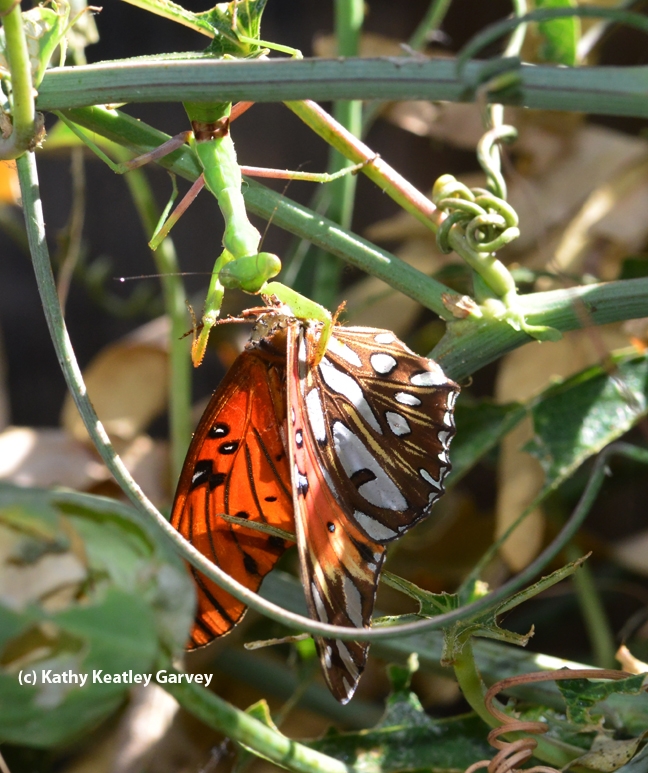 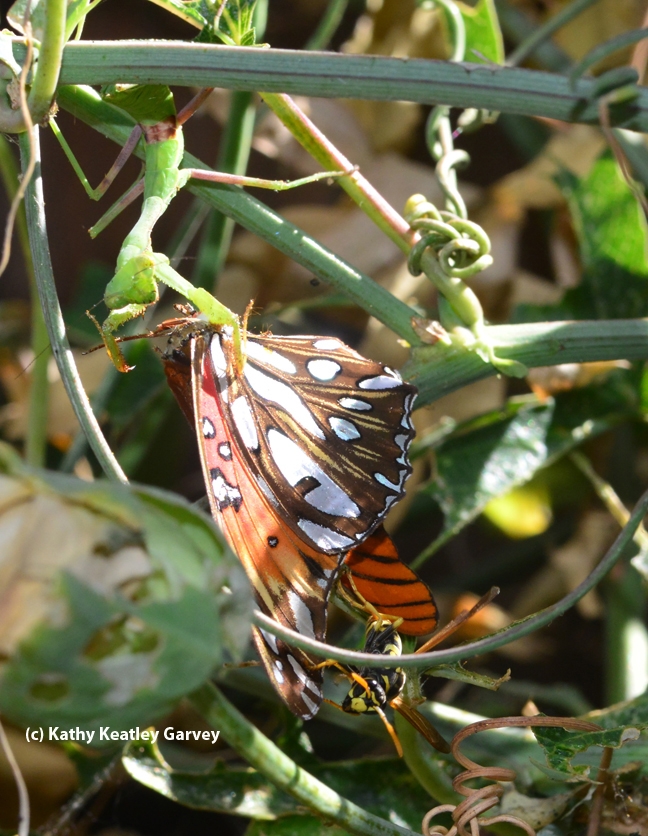 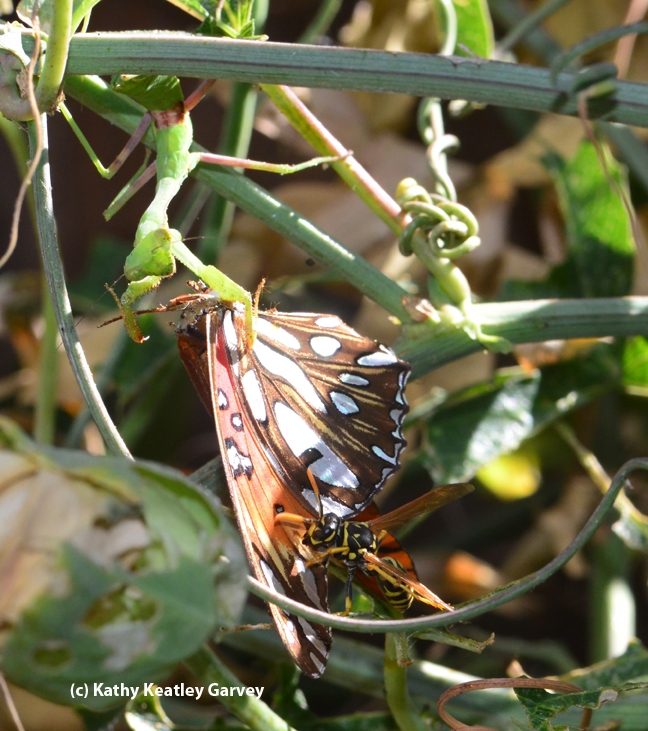 How can you hate a caterpillar and love a butterfly?

Some gardeners so love their passionflower vine (Passiflora) that they squirm at the thought of a caterpillar munching it down to nothing.

But that's what caterpillars do. The Gulf Fritillary butterfly (Agraulis vanillae) lays its eggs on its host plant, the passionflower vine, the eggs develop into larvae or caterpillars, and the caterpillars into Gulf Frits.

Our passionflower vine--which we planted specifically for the Gulf Frits--is now a skeleton. The caterpillars ate all the leaves, the flowers and the stems. What was once a flourishing green plant looks like a criss-cross of brown sticks.

Comedian George Carlin supposedly said "The caterpillar does all the work but the butterfly gets all the publicity."

And architect-author-designer-inventor Richard Buckminster Fuller observed: "There is nothing in a caterpillar that tells you it's going to be a butterfly."

And someone named John Grey offered this poetic comment:
"And what's a butterfly? At best,
He's but a caterpillar, at rest."

Yes, a hungry caterpillar turned into a magnificent butterfly.

How can you hate a caterpillar? 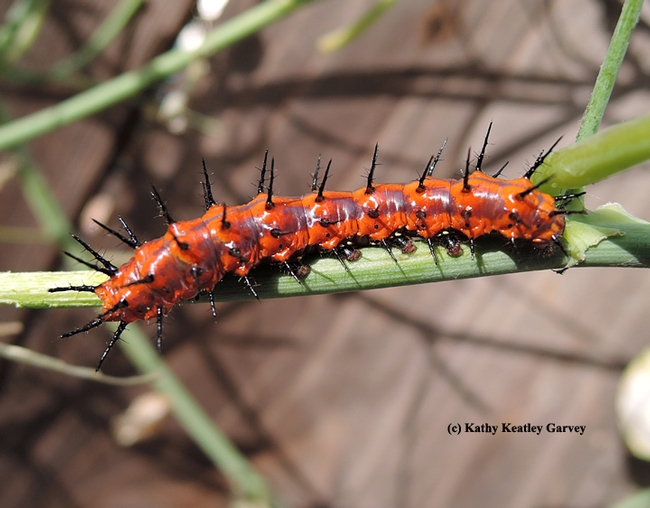 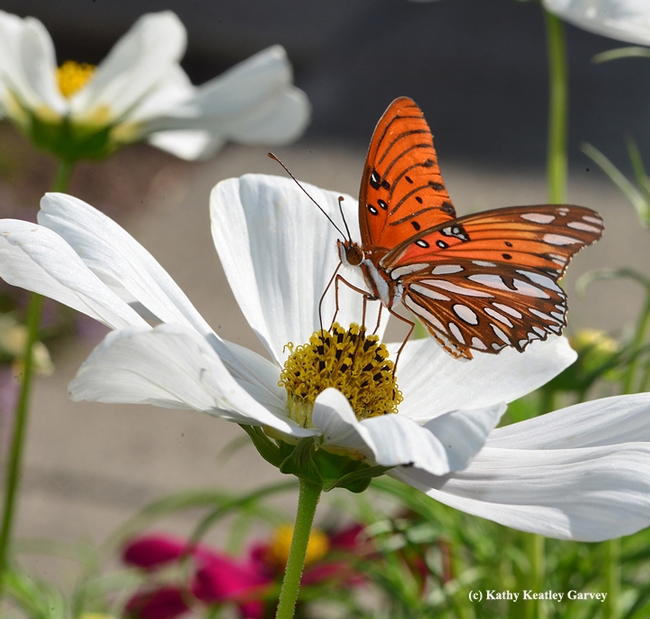 The lady beetle (family Coccinellidae) preys mainly on aphids--it can eat about 50 aphids a day or some 5000 aphids in its lifetime. But it will devour other soft-bodied insects, including mites, scales, mealybugs, leafhoppers, and butterfly eggs and larvae (caterpillars). Butterfly caterpillars move quite slowly; they are not Indy 500 speedsters.

We spotted a lady beetle early this morning on one of our passionflower (Passiflora) seed pods, surrounded by hungry Gulf Fritillary (Agraulis vanillae) caterpillars. It was  somewhat like a two-peas-in-a-pod scene, but without the peas.  Here were two insect species ON a pod, and both sharing the same warning color: red.

Sometimes we think that all of the Gulf Frit butterflies west of Mississippi are gravitating toward the plant to lay their eggs. The vine cannot support that many hungry caterpillars,  despite predation by scrub jays and European paper wasps.

The lady beetle, we assume is not only eating the tiny yellow eggs of the Gulf Frit, but the tiniest of the tiny larvae.  It's an exquisite buffet of tasty treats with high nutritional value. 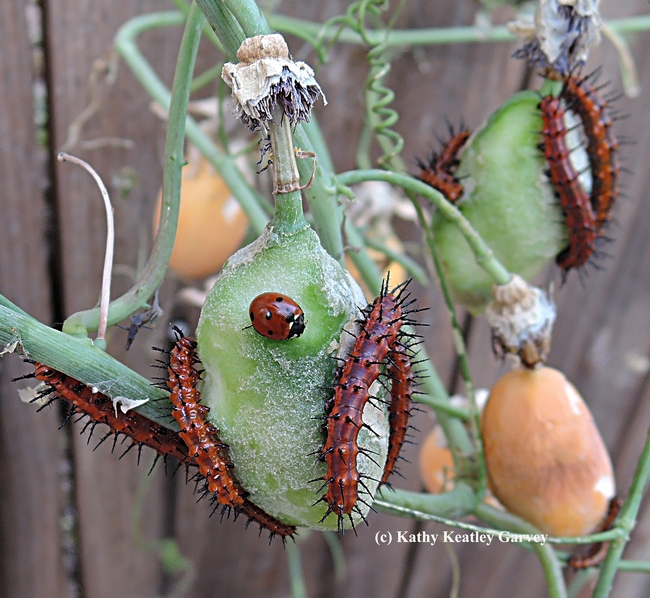 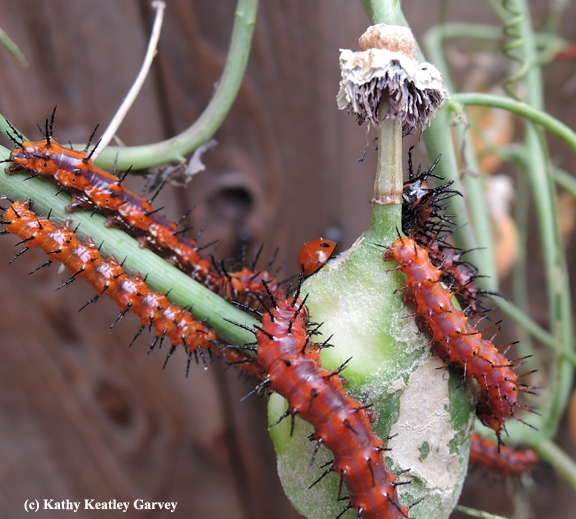 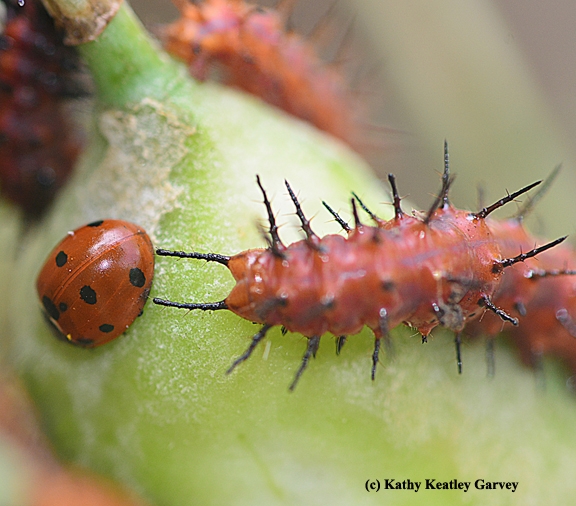 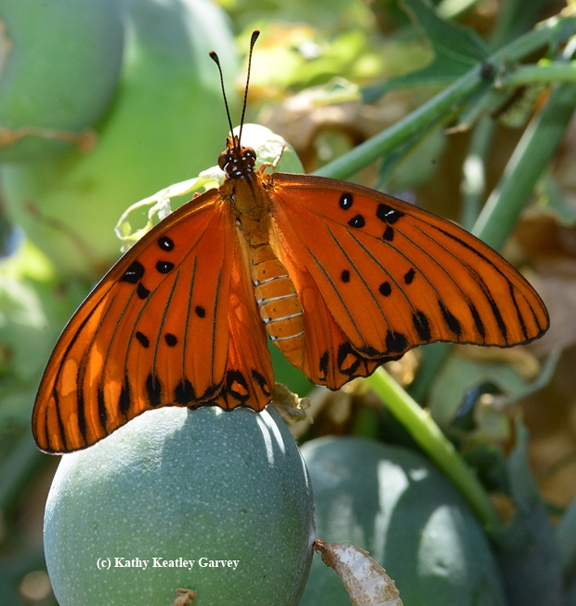 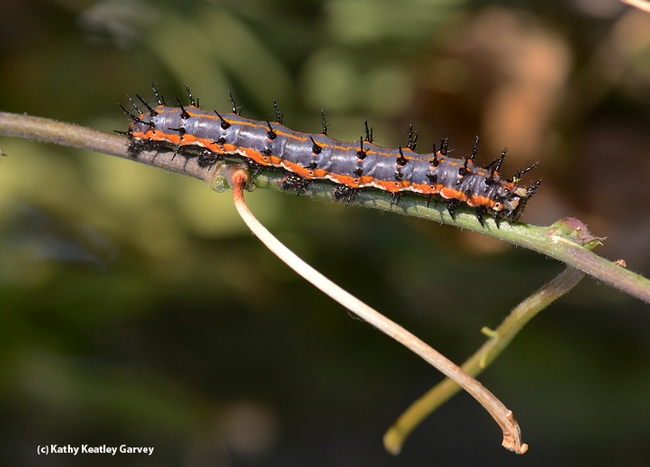 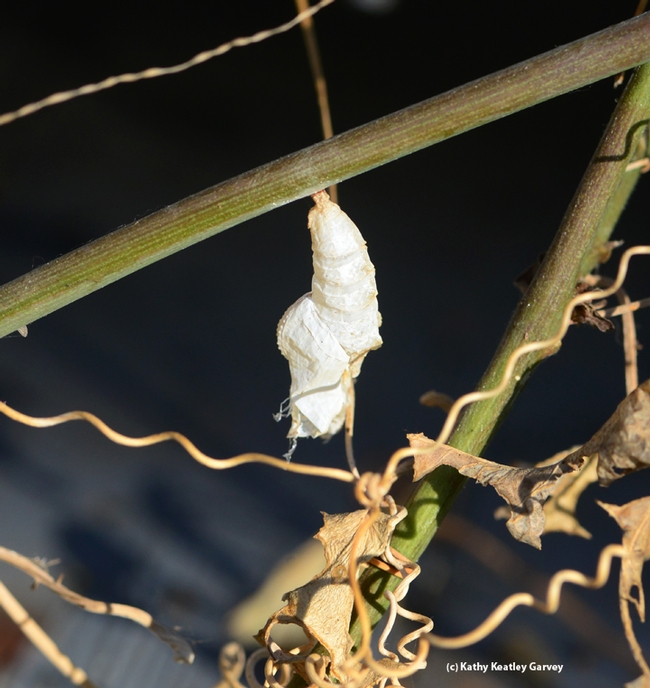 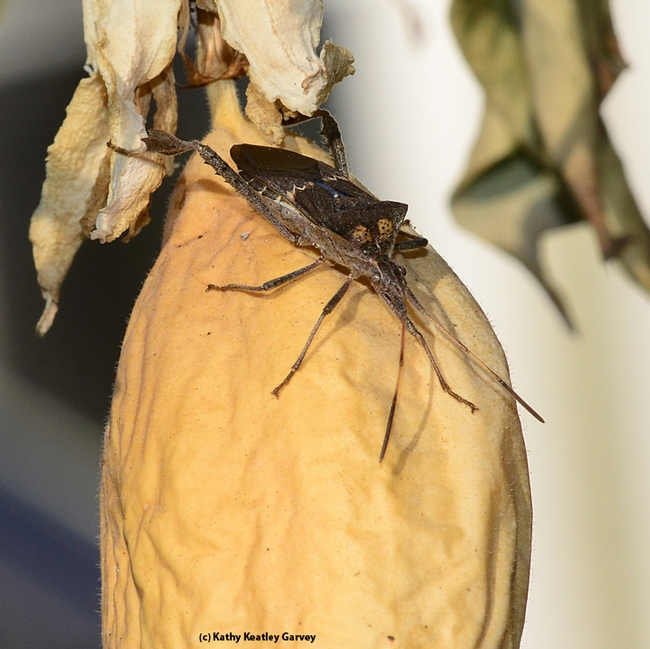 For several weeks, we've been rearing Gulf Fritilliary butterflies (Agraulis vanillae). We purchased a butterfly habitat from the Bohart Museum of Entomology at UC Davis, salvaged some caterpillars from our passionflower vines (Passiflora), and watched the transformation from caterpillars to chrysalids to butterflies.

One butterfly, however, emerged last weekend with crippled wings.

You may have seen crippled butterflies, too.

A reader who lives in Rancho Cordova said she's nurtured passion flower vines (the larval host plant of the Gulf Frits) for the past seven years and has "spotted or or two butterflies a year in the yard."

"In the past two weeks we suddenly have dozens and dozens of chrsalids," she wrote, adding "I'm not sure what their odds of survival are but I have picked up about 15 off the ground who were never able to fly. I tried giving them some sugar water on a q-tip and about four regained strength and were able to fly away but the others have died."

"Do you have any tips on helping our friends?" she asked. She also wanted to know the life span of a butterfly.

We asked noted butterfly expert Art Shapiro, distinguished professor of entomology and evolution at UC Davis, to answer the questions.

"It's highly abnormal that any significant proportion of Gulf Frits would be unable to fly," Shapiro said."If the pupae are not disturbed they hang vertically. The butterfly pops out and hangs on the bottom of the cast pupal skin, letting gravity pull down the wings so they elongate fully. If the bug is knocked down while the wings are soft and cannot immediately climb up a vertical surface, it will end up a cripple. The pupae should never be removed from their substrate and laid horizontally in a container. That virtually guarantees crippling. If there was no disturbance and all those animals fell down spontaneously, they are infected with some microorganism that has significantly weakened them."

"Any butterfly that is unable to fly is a lost cause and there is really no reason to try to save them since they won't reproduce. If a crippled female was mated by a flying male, which is possible, she wouldn't be able to lay her normal complement of eggs on the host plant anyway."

Shapiro, who monitors the butterfly population in the Central Valley of California and posts information on his website, says that "adult Gulf Frits, which are pretty unpalatable to predators--they have chemical defenses-- are quite long-lived. In warm weather they can live 4-6 weeks. In cold weather they can live 2-3 months, but are killed outright at 21-22F."

"For the record, butterflies have sugar receptors on their feet. When their feet contact sugar, the proboscis uncoils automatically for feeding. If it's necessary to feed a butterfly, place watered-down honey--not much--or Pepsi or Coke right out of the container--on a fairly non-absorbent surface--I use a strip of foam rubber--and, using forceps to hold the wings over the back, lower the feet to the liquid. Bingo! Allow to feed ad lib."

As for the crippled butterfly we reared, we released it in our backyard.  It encountered a possible mate, which checked it out and took off.

Then we placed it on an orange zinnia where it clung tightly to the blossom. A short life, true, but at least a taste of nectar and a little sunshine.

Mother Nature isn't perfect, and neither are we. 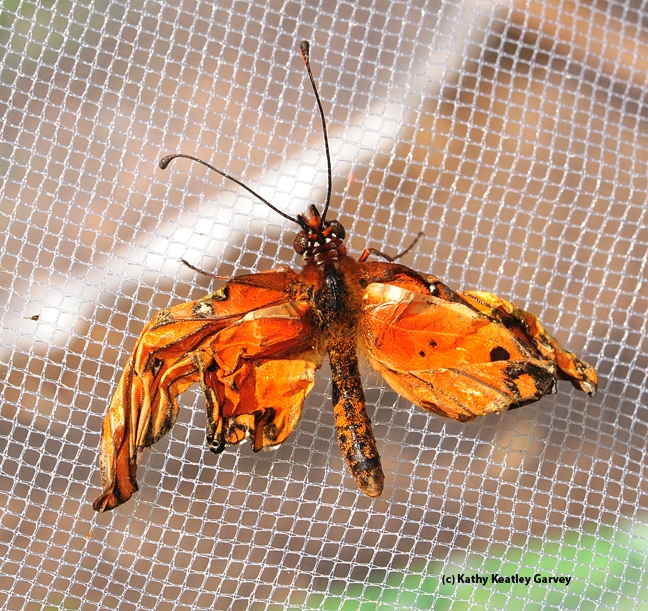 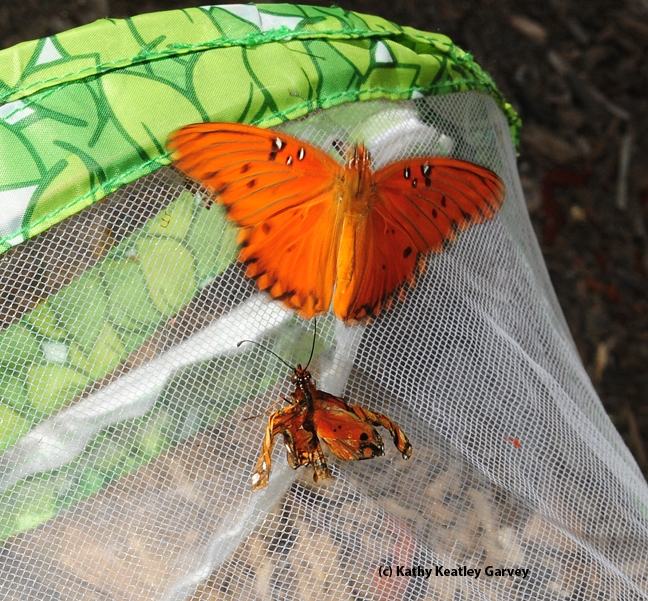 A possible mate checks out the crippled butterfly. (Photo by Kathy Keatley Garvey) 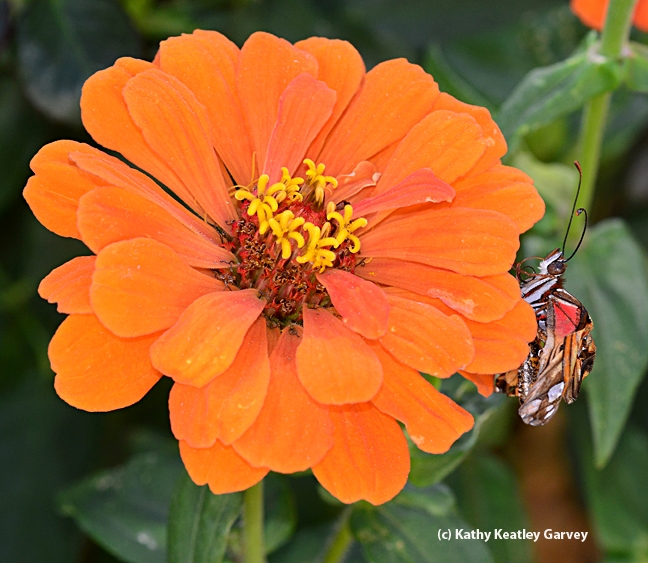