If you're thinking about adding more bee friendly plants to your garden but you're concerned about the drought, the UC Davis Arboretum has the answers.

The arboretum will host its public spring clearance plant sale on Saturday, May 17, from 9 a.m. to 1 p.m. at the UC Davis Arboretum Teaching Nursery on Garrod Drive.

You'll find a large election of Christmas natives and Arboretum All-Stars. (Members of the Friends of the UC Davis Arboretum and the Davis Botanical Society receive 10 percent off their purchases. And yes, you can join the Friends on May 17.)

One of the plants we like--as do the birds and the bees--is Kniphofia "Christmas Cheer," also known as a red hot poker and torch lily.  Ellen Zagory, horticulture director of the Arboretum, describes it as "a torch lily on steriods. It gets big and puts out a large display of showy flowers in winter and long into spring."

We remember taking a photo of the Christmas Cheer on Christmas Day in the Arboretum's Storer Garden. The bees didn't know about the winter break. Neither did a finch.

In a recent newsletter, Zagory wrote about some of the plants that will be available for sale.

“On campus we have fairly heavy soil and water that's high in bicarbonates and boron, so I always think…if it grows well here, it will do even better elsewhere. In light of limited water supplies and rising water prices we need to think even harder about plants that can survive with low or very low quantities of water, but they can still be pretty. You'd never know these were drought-tolerant considering the seasonal impact and drama they provide!”

The Arboretum kindly provides a list of available plants that you can download from its web page.

The bees--and the birds, butterflies and others engaged in animal/plant interactions--will thank you. 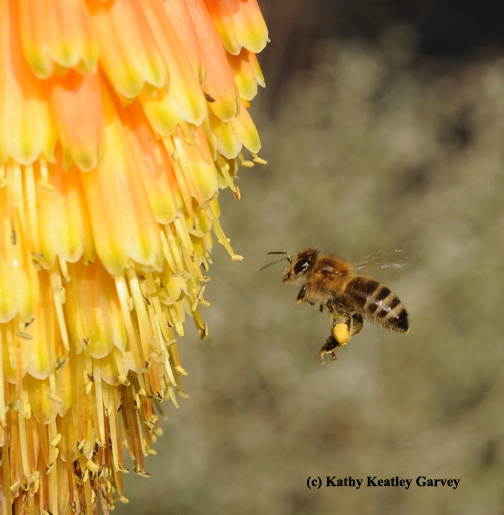 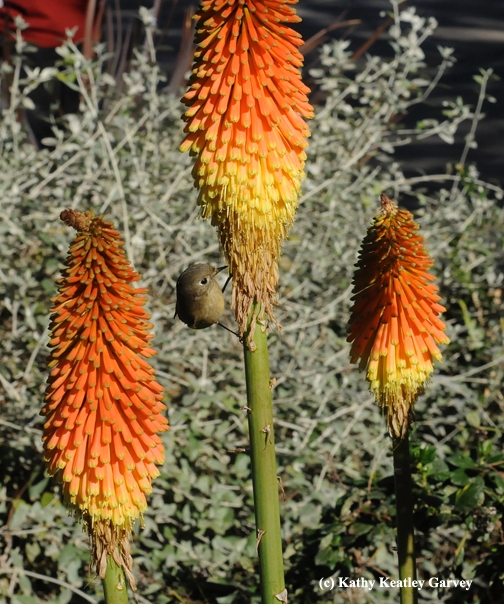 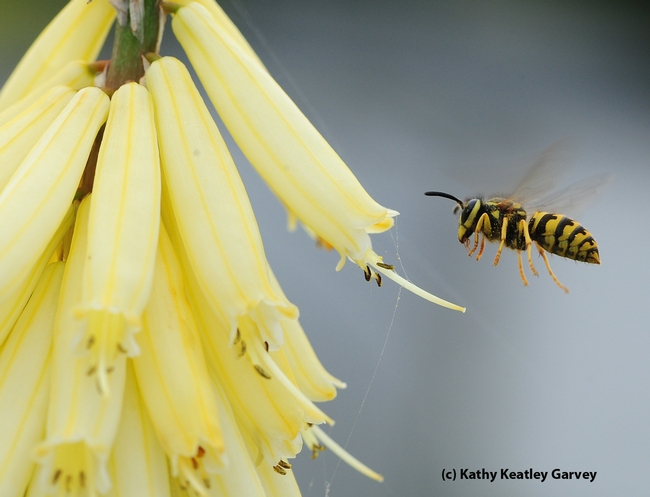 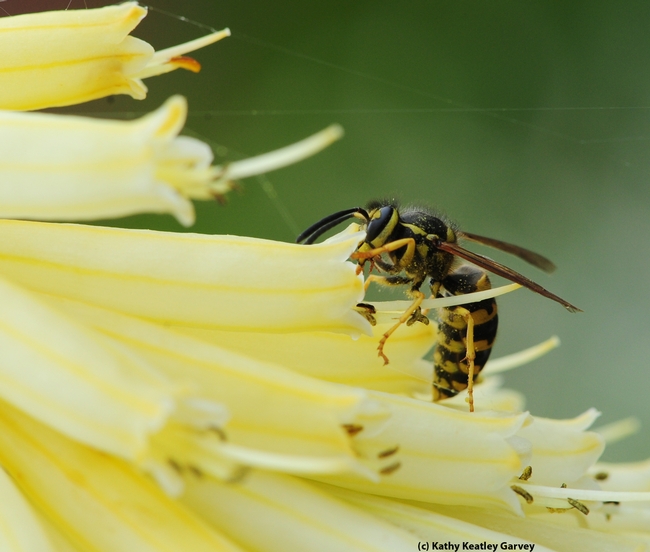 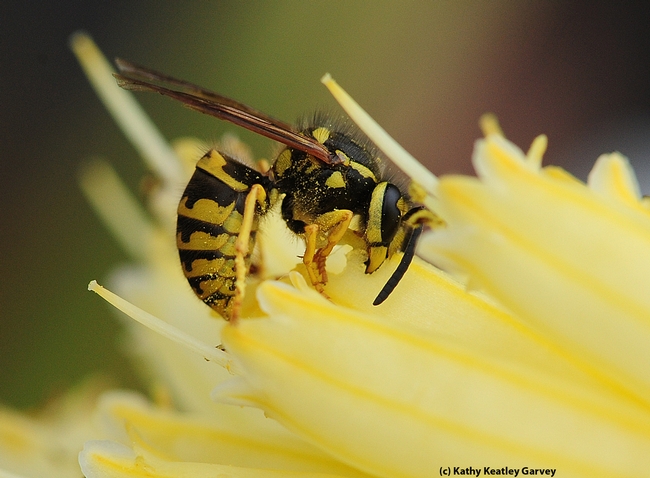 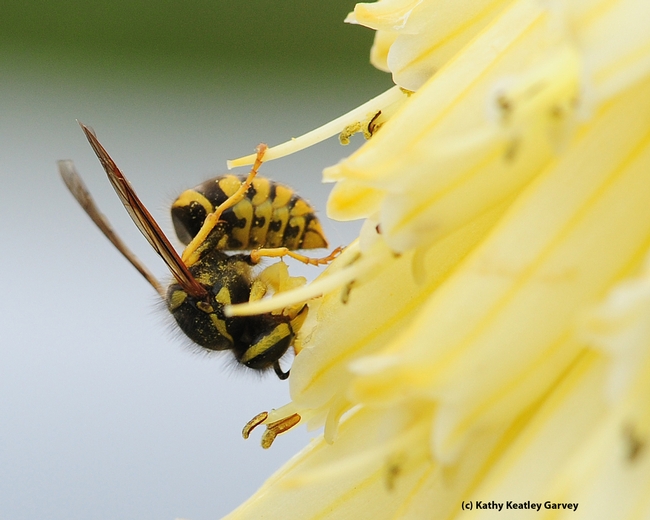 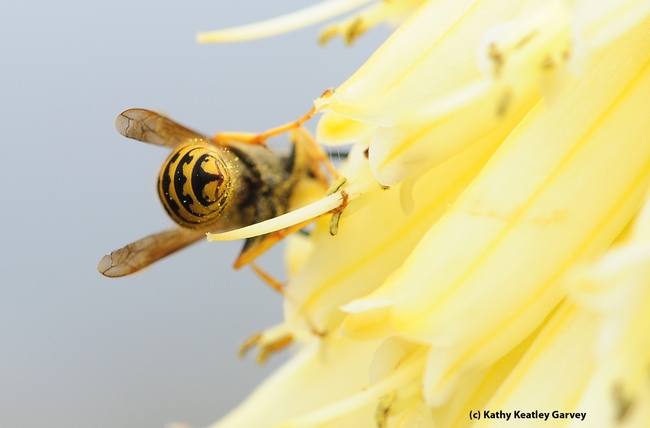 In the plant world, that would be the Kniphofia “Christmas Cheer," also known as "red-hot poker."

On a visit last week to the Storer Garden, UC Davis Arboretum, we encountered a lone honey bee foraging among the Christmas Cheer.

This one probably came from a nearby hive at the Harry H. Laidlaw Jr. Honey Bee Research Facility tended by bee breeder-geneticist Susan Cobey, manager of the facility.

Christmas Cheer is an Arboretum All=Star.

And so is the honey bee: an all-star. 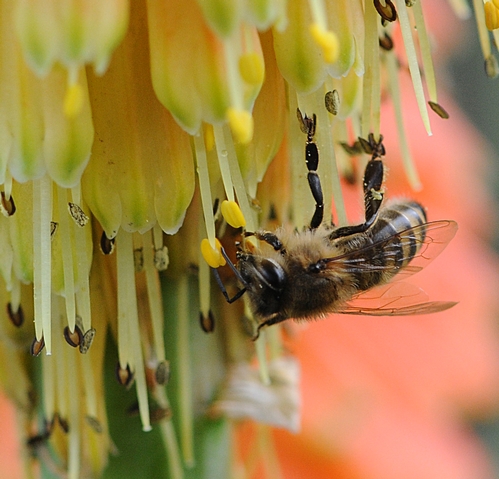 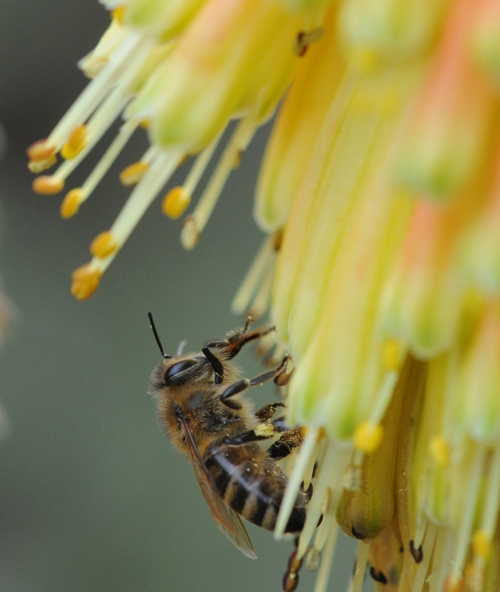 Cleaning Her Tongue
HONEY BEE on the Christmas Cheer takes time to clean her tongue. (Photo by Kathy Keatley Garvey) 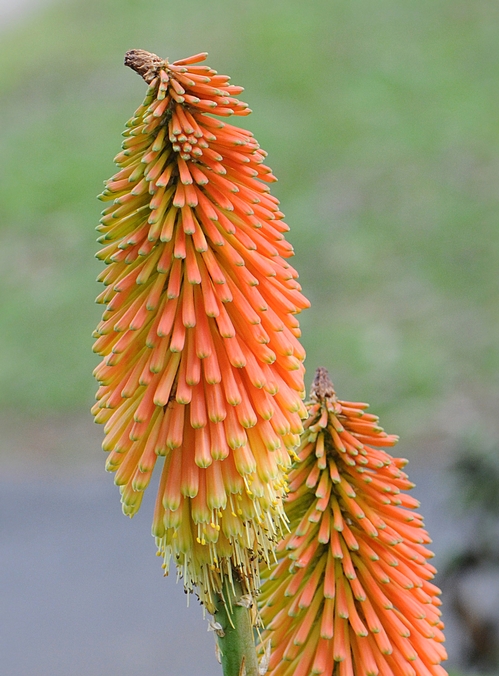 I always thought the red-hot poker was primarily red.

This one in the Storer Gardens at the University of California, Davis, was mostly yellow.

It was Saturday, Dec. 20, 2008, five days before Christmas, and a lone honey bee, packed with pollen, was heading for the red-hot poker, variety "Christmas Cheer" (Kniphofia). 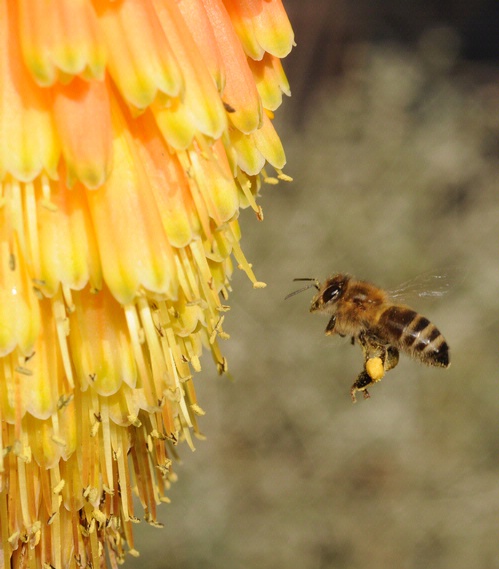 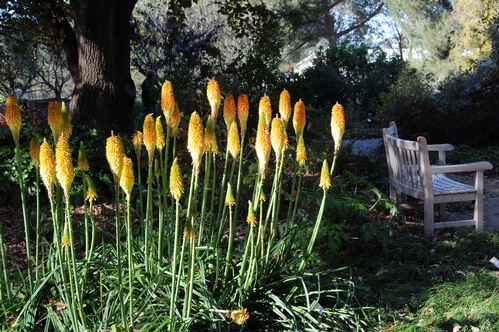