Bombus vosnesenskii (yellow-faced bumble bee). (Photo by Kathy Keatley Garvey)
It's off to Japan to talk about bumble bees and other pollinators.

Pollination ecologist Neal Williams, assistant professor of entomology at UC Davis, will be one of the featured speakers at the International Symposium on Pollinator Conservation, to be held Jan. 27-29  in Fukuoka, Japan.

His talk will explore agricultural landscape change and the role of bee life history in predicting and understanding responses of bee communities. The conference, sponsored by the Japan Society of the Promotion of Science and themed "Conservation and Sustainable Use of Pollinators: Towards Global Assessments," will take place on the Hakozaki campus, Kyushu University.

Williams is the only invited speaker from California. (See his lab research)

“Bees provide a critical ecosystem service for humanity through their pollination of crops worldwide,”  said Williams, who will speak on “Bee Life History and Resource Distributions Determine Population and Community Responses to Agricultural Landscape Change.”

“There is increasing recognition of the contributions of wild species to crop pollination and their role in sustainable pollination into the future.  The persistence of wild bee species depends on the availability of essential nesting sites and forage resources within the landscape.  Agriculture management can profoundly change the abundance and distribution of these resources over time and space."

“Because bee species differ in specific nesting and forage requirements, there is the potential for land transformation to filter wild bee communities based on such ecological traits,” Williams said. “I will present two separate studies from central California exploring the role nesting and forage resources in determining bee responses to agricultural intensification.  The first study explores the effects of bee life history traits and resource distributions on observed changes in bee communities between semi-natural and farmland components of an agricultural landscape.

“I will use a combination of empirical data sampled over multiple landscapes and spatial modeling of bee communities to reveal the relative importance of forage and nesting resources to bee responses.    The second study focuses on the bumble bee Bombus vosnesenskii.  I will use empirical data on bumble bee colony performance and a spatially-explicit model of floral abundance to quantify the importance the forage-resource landscape in determining worker and queen production.”

Williams pointed out that  “the abundance of forage strongly affected worker production; however, it was most sensitive to early season resources.  Spatio-temporal variation in the resource landscape across the season reduced the overall effect of the forage landscape on queen production.  Nonetheless consistent forage resources are key to the persistence of bumble bee populations in this region.” 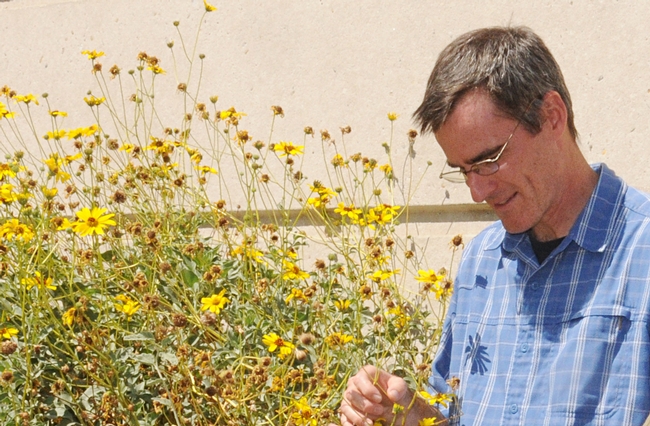 How do bumble bees plan their route to find the most rewarding flowers in the shortest distance?

That "is a mathematical puzzle which has vexed academics and traveling salesmen alike," according to an article in the June 29th edition of Science Daily.

So lead researcher Mathieu Lihoreau of Queen Mary, the University of London's School of Biological and Chemical Sciences, set out to find why.

The researchers monitored the movement of a bumble bee, Bombus terrestris, and published their work in the British Ecological Society's Functional Ecology.

Co-author Nigel Rain told Science Daily: "The Traveling Salesman must find the shortest route that allows him to visit all locations on his route. Computers solve it by comparing the length of all possible routes and choosing the shortest. However, bees solve simple versions of it without computer assistance, using a brain the size of grass seed."

For the project, the researchers made some flowers more rewarding than others, so the bees had to decide "between following the shortest route or visiting the most rewarding flower first," Lihoreau told Science Daily.

"We have demonstrated that bumblebees make a clear trade-off between minimising travel distance and prioritising high rewards when considering routes with multiple locations," concluded co-author Professor Lars Chittka in the Science Daily piece. "These results provide the first evidence that animals use a combined memory of both the location and profitability of locations when making complex routing decisions, giving us a new insight into the spatial strategies of trap-lining animals."

Interesting research. Interesting research, indeed. As an aside, foraging bumble bees don't appear to be as navigationally challenged as their traveling human counterparts--many of whom would not dare travel without GPS, maps, a front-seat passenger skilled in navigation, or handwritten notes from Aunt Mary.

Just wondering--might this research also correlate with human travelers'  fast-food stops? Why do some hungry travelers stop at the first  fast-food restaurant, without considering what heart-healthy, nutritious foods lie ahead? 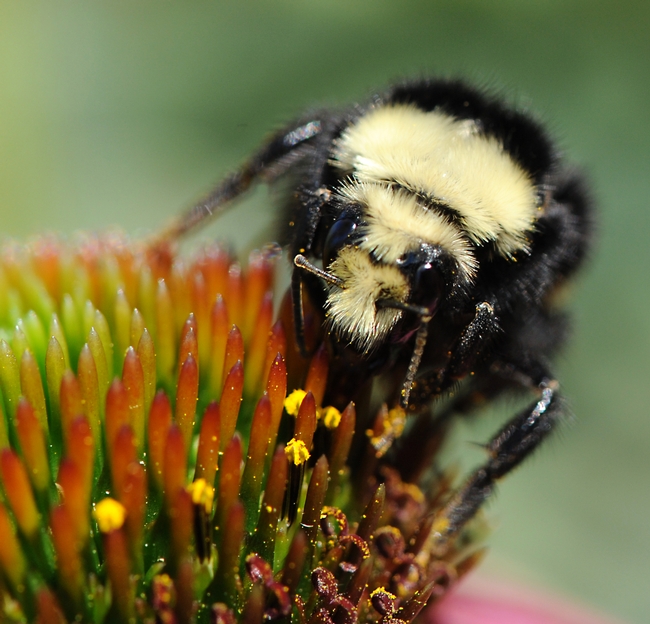 So you want to attract native pollinators to your garden.

The Xerces Society for Invertebrate Conservation, based in Portland, Ore., has just published a 380-page book, Attracting Native Pollinators, that encourages you to do just that.

It offers a wealth of information, from identifying common bees of North America to helping you decide the best nectar-and-pollen plants for your garden.

The non-profit Xerces Society earlier announced that its Bumble Bee Garden Kit is available. The kit tells you how to attract bumble bees to your garden.

First the garden kit, then the book.

Bring on the pollinators! 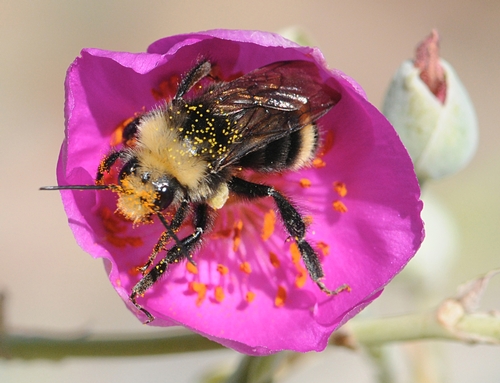 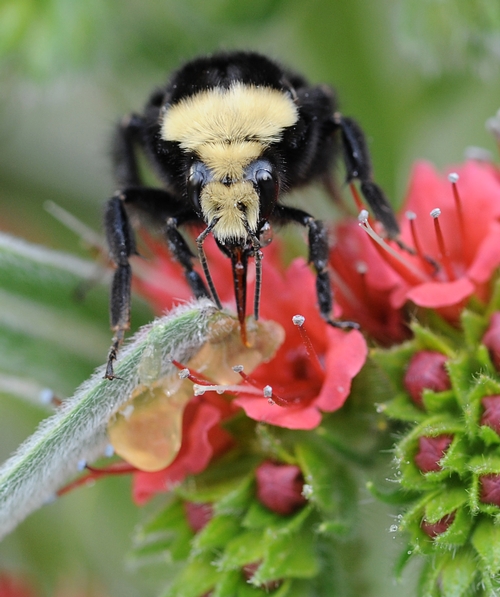 Some species of bumble bees are disappearing at an alarming rate.

And that, in itself, is alarming.

A three-year study published Jan. 3 in the Proceedings of the National Academy of Sciences (PNAS) “uncovered  major losses in the relative abundance of several bumble bee species and declines in their geographic range since record-keeping began in the late 1800s,” according to a University of Illinois press release.

The interdisciplinary study, led by Sydney Cameron of the Department of Entomology and Institute for Genomic Biology, University of Illinois, showed that "declining bumble bee populations have lower genetic diversity than bumble bee species with healthy populations and are more likely to be infected with Nosema bombi, an intracellular parasite known to afflict some species of bumble bees in Europe."

“The national analysis found that the relative abundances of four of the eight species analyzed have declined by as much as 96 percent and that their surveyed geographic ranges have shrunk by 23 to 87 percent,” according to the news release. “Some of these contractions have occurred in the last two decades.”

Cameron and his colleagues studied eight of the 50 species of bumble bees found in North America. Of the eight, four are significantly in trouble.

Said Cameron: "They could potentially recover; some of them might. But we only studied eight. This could be the tip of the iceberg.”

Of those western bumble bees, only B. occidentalis is in decline “and that one only in the western part of its range,” Thorp told us.

“Although the study treated B. pensylvanicus as the eastern species in decline, the researchers did not consider its very close western relative, B. sonorus, which used to be very common here and the rest of the Central Valley, but has virtually disappeared here since about 2003,” Thorp said.

"Both these species are doing well from the southern USA down into Mexico, however.  This is a curious reversal of what one would expect if global warming might be a cause.”

Thorp has been tracking the now critically imperiled Franklin's bumble bee (Bombus franklini) since 1998. "It has the most restricted distribution range of any bumble bee in North America and possibly the world. Its range is about 190 miles north to south and 70 miles east to west in a narrow stretch between southern Oregon and northern California between the coast and Sierra-Cascade range,” he said.

Its known distribution includes Jackson, Douglas and Josephine counties in Oregon and Siskiyou and Trinity counties in California. It lives at elevations ranging from 540 feet in the north to 6800 feet in the south.

The decline, disappearance and possible demise of Franklin’s bumble bee, is closely linked to the widespread decline of native pollinators in North America, Thorp said, and should concern all facets of society. “The loss of a native pollinator could strike a devastating blow to the ecosystem, economy and food supply.” 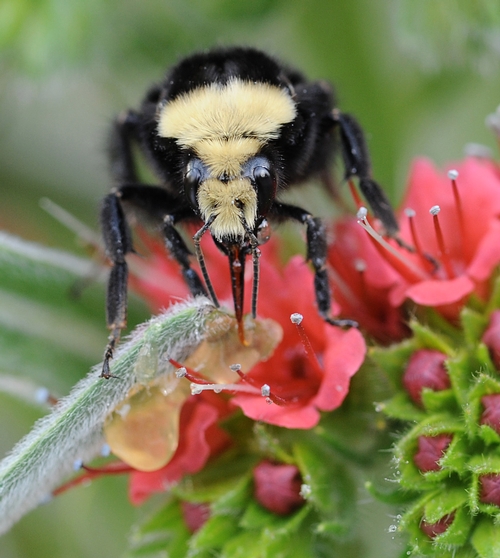 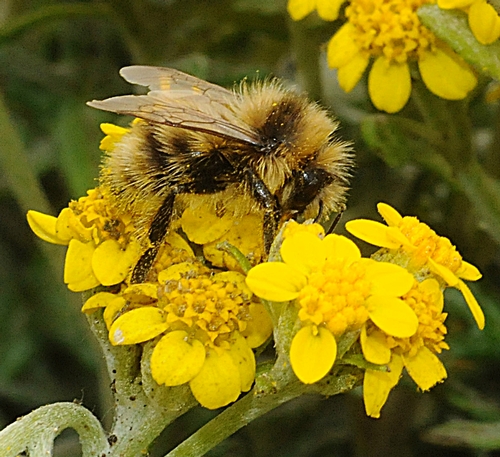 Bombus Bifarius
BOMBUS BIFARIUS, shown here at Bodega Bay, was one of three western species of bumble bees looked at in the Cameron study. Of the three, only B. occidentalis is in decline “and that one only in the western part of its range,” Robbin Thorp said. (Photo by Kathy Keatley Garvey) 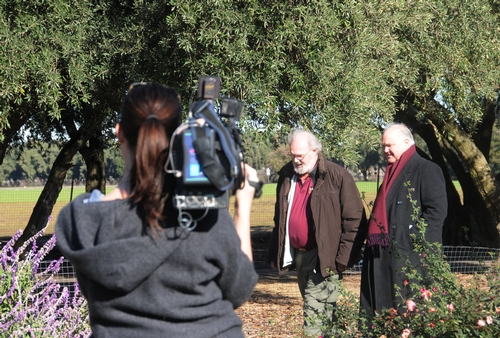 Published on: July 22, 2010
The Häagen-Dazs Honey Bee Haven at the Harry H. Laidlaw Honey Bee Research Facility on Bee Biology Road, University of California, Davis, is a study in diversity.

Bees, including honey bees, bumble bees, carpenter bees, leafcutter bees and sweat bees, along with other pollinators, share the pollen and nectar in the half-acre bee friendly garden.

Native pollinator specialist Robbin Thorp, emeritus professor of entomology, has logged some 50 different species of bees in the garden since its inception. He began a baseline monitoring process when the garden was a field of weeds, instead of dreams.

The garden, planted last fall, changes daily, which it is meant to do. When the grand opening celebration of the haven takes place from 10 a.m. to 2 p.m. on Saturday, Sept. 11, expect to see scores of visitors--both humans and pollinators--sharing the garden. 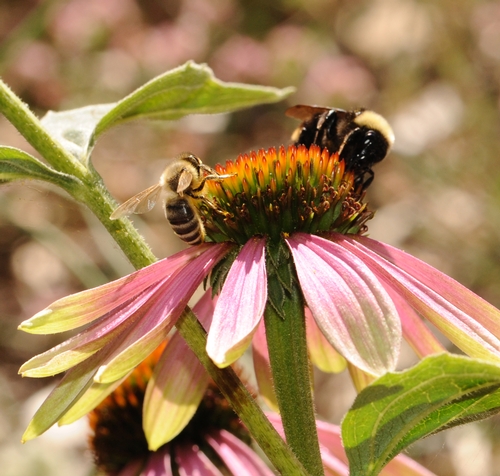 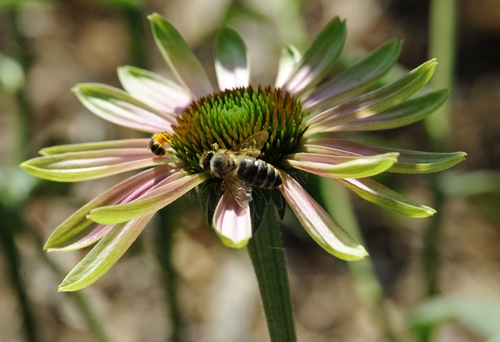