When the University of California, Davis, celebrates its annual Picnic Day on Saturday, April 17, be sure to check out the bugs.

Entomologists will showcase insects at the Bohart Museum of Entomology at 1124 Academic Surge on California Drive, and at Briggs Hall, off Kleiber Drive, from 11 a.m. to 4 p.m.

Matan Shelomi, a first-year graduate student in entomology whose major professor is Bohart director Lynn Kimsey, is quite fond of the walking sticks at the insect museum. Just ask his colleagues.

This one below is a giant lime green walking stick (Diapherodes gigantea) from the Lesser Antilles, from Guadeloupe to Grenada. The females are a bright green and about 17 centimeters long, while the males are about 11 cm and a dull brown.

They do not eat little children.

At Briggs, you can participate in the cockroach races, "Maggot Art" (a trademarked educational activity coined by UC Davis forensic entomologist Rebecca O'Flaherty) and termite trails (watch termites follow the "pheromone"). You can also check out the kissing bugs, bed bugs, fleas, ticks and assorted other critters.

Here's more information on what the entomologists are planning on Picnic Day. 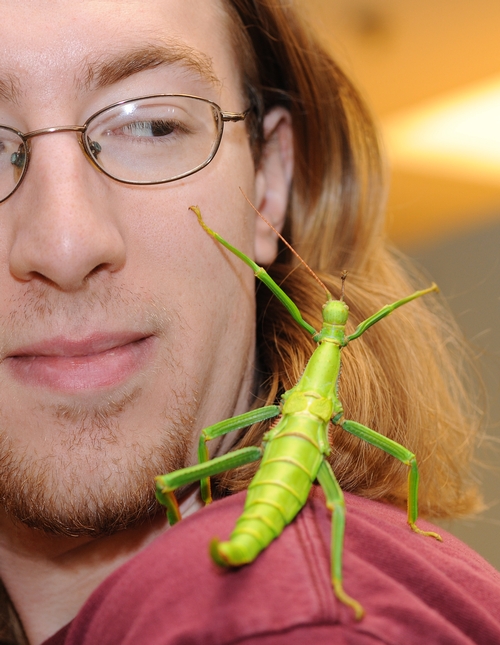 Matan Shelomi
MY BUDDY--Matan Shelomi, a first-year graduate student in entomology at UC Davis, checks out a lime green walking stick at the Bohart Museum of Entomology. It will be a key attraction at the insect museum on Picnic Day, set April 17. (Photo by Kathy Keatley Garvey) 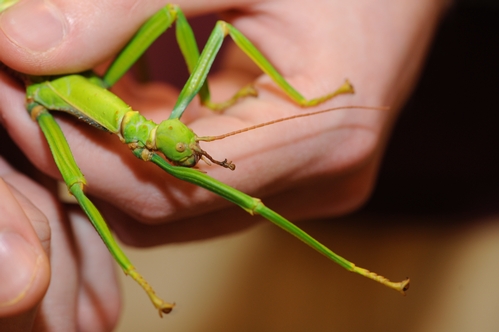 John Emery is a spider man.

Oh, he’s not a super hero who clings to city skyscrapers and chases villains and rescues damsels in distress.

He’s the IT manager for Sue Mills, a company which sells school uniforms.

But he's truly a spider man. He has "his" very own spider cocoon right outside his office window on , where he watches mama and her babies.

In a recent e-mail, he wrote: “My co-workers think I'm strange (they want to kill the spiders) and my friends (and wife) to whom I've been sending pics today (taken with my iPhone through a handheld magnifying lens, using a flashlight for lighting) seem unimpressed.”

So Emery kindly e-mailed some of his photos to the UC Davis Department of Entomology thinking we'd enjoy seeing them and share his excitement.

We did and we do!

"It's like a nature documentary right next to my desk," he wrote. "How lucky am I?”

Frankly, we’re a little envious, too. Today outside my window in the UC Davis Department of Entomology, a mud dauber cruised past and bounced off the window pane.  A crane fly bumbled by.  Several ants crawled unceremoniously across the ledge.

But a spider home outside my window? I wish!

“I’ve always loved the bees and the bugs,”  Emery said. He annually attends the UC Davis Picnic Day, which, like any good picnic, includes bugs.

At this year's Picnic Day, he and his wife (a 2000 graduate of UC Davis with a degree in English), pointed out the insect displays in Briggs Hall to their  three-year-old daughter. She didn't seem at all impressed. "She didn't want to hang out near any of the bugs,” Emery  lamented.  “She was already traumatized by the snakes we'd seen earlier” and “we had to leave.”

Meanwhile, the spiders aren't leaving. Not just yet. "They're probably yellow sac spiders,” said Lynn Kimsey, professor and chair of the Department of Entomology and director of the Bohart Museum of Entomology, which houses seven million specimens (plus live displays of Madagascar hissing cockroaches, Vietnamese walking sticks and  black widows spiders).

Unlike a web weaver, a sac spider builds a silken tube or sac. It does so in a protected area, such as under a log, in a corner of a room—or right outside John Emery’s San Francisco office window.

"Omigosh!" exclaimed Bohart senior museum scientist Steve Heydon when he saw the spider sac bulging with little ones. "Look at them all! I think they're yellow sac spiders, but without a specimen, I can't be certain."

Heydon IS certain, however, how many black widows are in an average egg case, a question he’s asked periodically during school tours at the museum. And, ahem, just how many are there? 175. He counted them. Took him an hour.  No escapees, either.

Meanwhile, John Emery continues to make us all envious by capturing wonderful images of the spider family outside his office, using an iPhone and a handheld magnifying glass.

But wait!  John Emery, our San Francisco Spider Man, is likely to become a bee man.

“I’ve recently been really, really wanting," he said, "to start a bee colony in my backyard.” 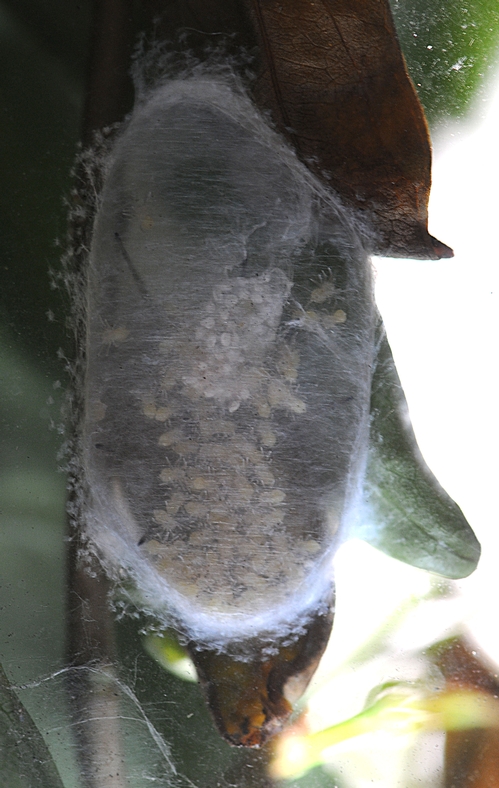 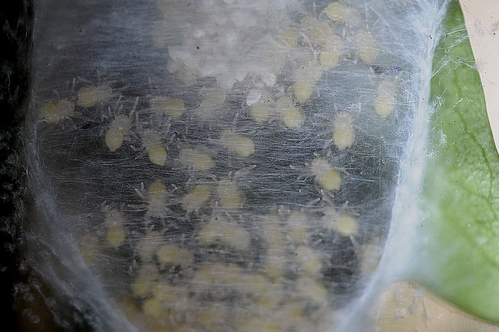 Who hates termites? Raise your hands.

(Too bad Cash didn't sing about termites "walking the plank." But then, termites wouldn't "walk the plank"--they'd eat it.)

Tara Thiemann, one of the graduate students in entomology coordinating the activity, will  draw a line on white paper, scoop up a termite, and place it on the paper.

The termite will walk the line.

Since termites are blind and cannot hear, they rely on smell to navigate.  They navigate by following the scent of a pheromone, which is a chemical they secrete to send information to their buddies.

It so happens that a chemical in certain ink pens smells just like a pheromone, so they'll follow the trail.

Not all pens, however, are created equal in the pheromone category. Many contain no  pheromone-like scent. And those that do certainly aren't labeled: "Attracts termites."

Lisa Reimer, a malaria mosquito scientist who received her doctorate in entomology last year from UC Davis, told us that it's too bad that we can't use the termite trail "technology" to draw termites out of our homes.

"Like draw a line right out the front door," she quipped. 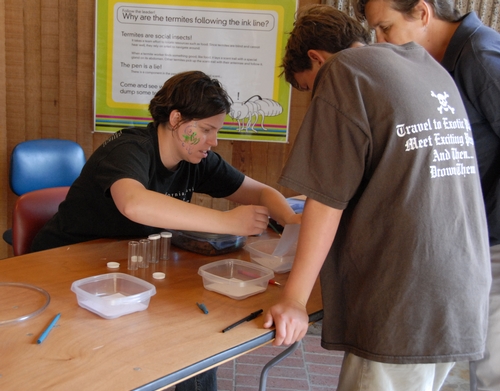 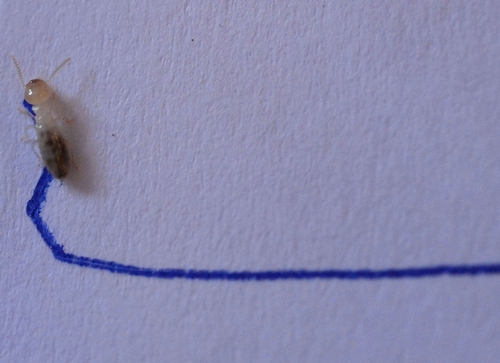 Walking the Line
WALKING THE LINE--A termite follows the scent of what smells like a pheromone, and stops at the end of the ink line. (Photo by Kathy Keatley Garvey)
Tags: Lisa Reimer (1), Tara Thiemann (4), termite trails (1), UC Davis Picnic Day (54)
Comments: 2
A Taste of Honey 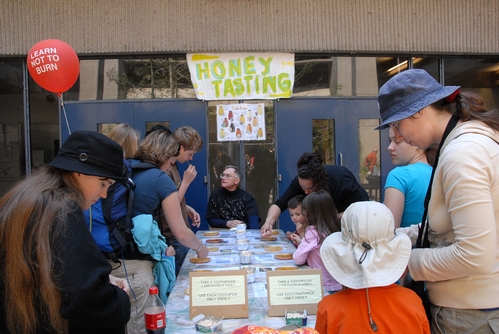 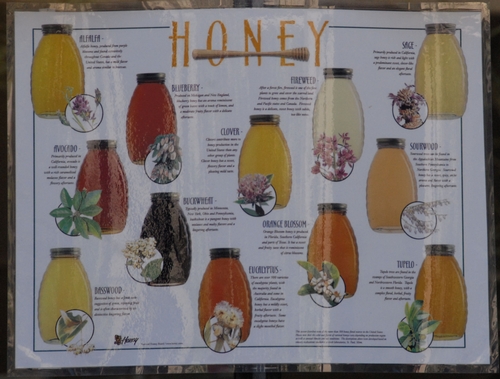 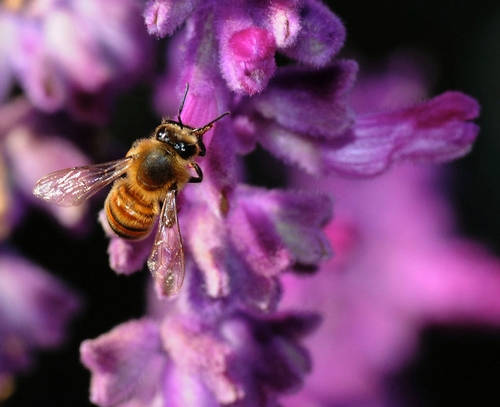 Honey bee on sage
HONEY BEE on salvia (sage). Sage honey, primarily produced in California, is rich and light with a cloverlike flavor and "an elegant after taste," according to the National Honey Board. (Photo by Kathy Keatley Garvey)
Tags: a taste of honey (1), Briggs Hall (17), Eric Mussen (246), honey (31), UC Davis Picnic Day (54)
Comments: 0
You're Painting with What?

If you want to create art that's bound to be a conversation piece, you need to head over to Briggs Hall at the of , on Saturday, April 18.

April 18 is the 95th annual UC Davis Picnic Day, a campuswide event that showcases, the organizers say,  "the richness and diversity of campus life."

Make that "the richness and diversity of insects," too.

Briggs Hall, home of the Department of Entomology since 1972, is where bugs rule.

Forensic entomologist Rebecca O’Flaherty, a doctoral candidate in entomology, will be there with her free “Maggot Art” event.

She’ll provide the maggots, non-toxic paint, and paper. Your job is to pick up a  maggot with specially designed larval forceps, dip it in paint (your choice of colors), place it on white paper, and let the maggot do its thing--which is to crawl across the paper. Voila! Maggot Art.

It’s one-of-a-kind art suitable for framing or posting on the refrigerator. Your Aunt Gertrude will be proud.

Maggot Art is actually the educational teaching curriculum that O'Flaherty coined and trademarked in 2001 while she was studying entomology at the . She launched Maggot Art as a community outreach project to teach youths about the fascinating world of insects.

Since 2001, she’s taught thousands of students the “art of Maggot Art”  in the classroom, while also providing information about blow flies. She's a skilled Maggot Art artist herself.  In 2007, she coordinated a Maggot Art Show at the Capital Athletic Club, Sacramento, with colleagues and fellow artists Brandi Schmitt and Charlotte Wacker.

Maggot Art has been a tradition at Picnic Day since 2003.  Kids usually love it, but that's not  always true for adults. The "yecch" factor sometimes kicks in, she admits.

Maggot Art, Termite Trails, Cockroach Races and Honey Tasting are just a few of the events that will be offered at Briggs Hall from 9 a.m. to 4 p.m.

Bugs rule. They do, indeed. 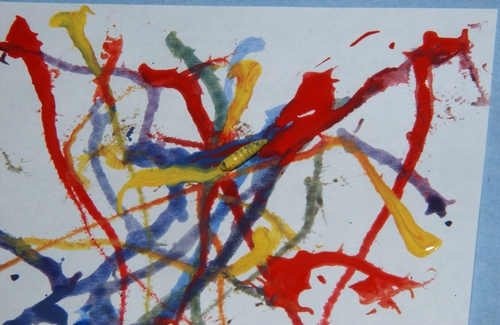 Maggot Art
MAGGOT ART will be offered at the UC Davis Picnic Day for the seventh consecutive year. It's about dipping a maggot in non-toxic, water-based paint and letting it crawl across white paper. Maggot Art was coined by forensic entomologist Rebecca O'Flaherty, who is seeking her doctorate at UC Davis.(Photo by Kathy Keatley Garvey) 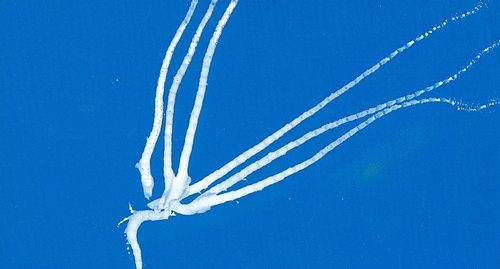 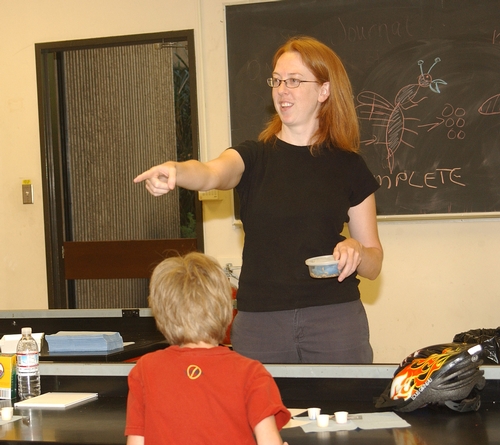