A sure-fire way to frighten arachnophobics is the very mention of "spiders"--especially on Halloween.

Spiders aren't insects but arthropods, order Araneae. They have eight legs, which according to some, are seven legs too many. They are also distinguished by their chelicerae with fangs that inject venom.

If you fear them, there's a name for that fear: Arachnophobia. Wikipedia says that "People with arachnophobia tend to feel uneasy in any area they believe could harbor spiders or that has visible signs of their presence, such as webs. If arachnophobics see a spider, they may not enter the general vicinity until they have overcome the panic attack that is often associated with their phobia. Some people scream, cry, have trouble breathing, have excessive sweating or even heart trouble when they come in contact with an area near spiders or their webs. In some extreme cases, even a picture or a realistic drawing of a spider can also trigger fear."

So many myths about spiders.  The Burke Museum of Natural History and Culture, University of Washington,  Seattle, has posted some of the myths, misconceptions and superstitions on its website.

The general fallacies, as listed by Rod Crawford, curator of arachnids:

Meanwhile, over at the Bohart Museum of Entomology at the University of California, Davis, plans are underway for an open house themed "Insect Myths." They will focus on spider myths, too.

The event, free and open to the public, is set for Sunday, Nov. 23 from 1 to 4 p.m. in Room 1124 of the Academic Surge Building on Crocker Lane,  off LaRue Road.  Directed by Lynn Kimsey, professor of entomology at UC Davis, the museum houses a global collection of nearly eight million specimens and is the home of the seventh largest insect collection in North America, and the California Insect Survey, a storehouse of the insect biodiversity. The museum is open to the public four days a week, Monday through Thursday (9 a.m. to noon and 1 to 5 p.m.)  but it sponsors special weekend open houses as well.

When you attend the Bohart Museum open houses, you'll probably have the opportunity to hold and/or photograph "Rosie," a 24-year-old tarantula. It's one of the critters in the live "petting zoo," which also includes Madagascar hissing cockroaches, millipedes and walking sticks. 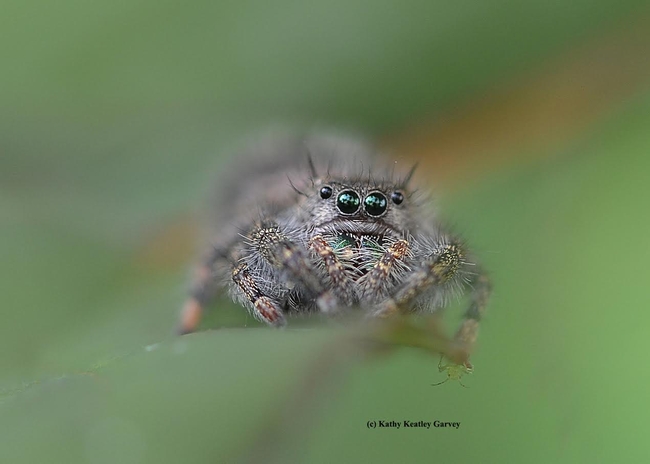 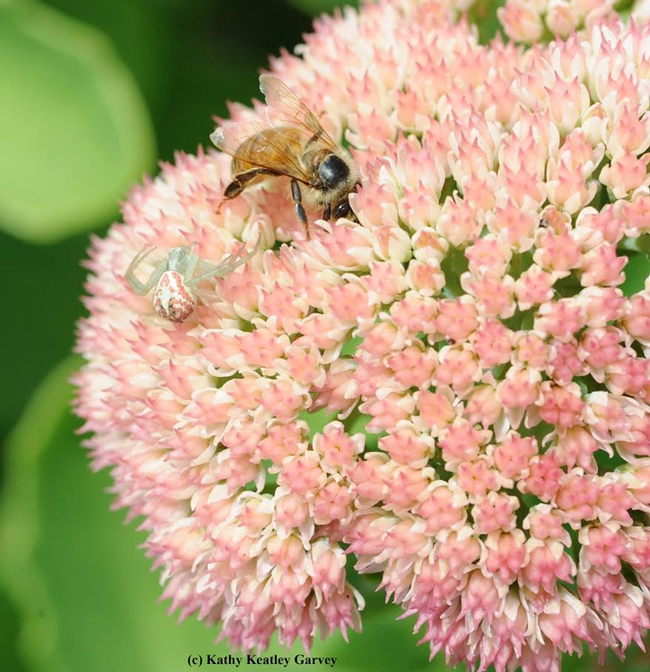 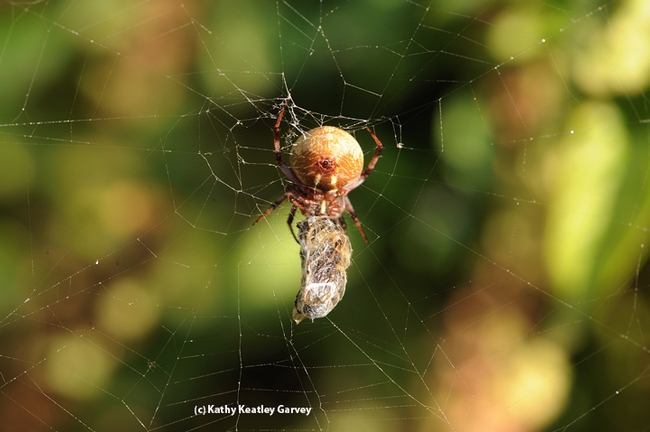 Okra. You either love it or hate.

If you hate it, it's probably because of its characteristic "slime" that it produces. It's a mucilaginous plant. If you love it-- absolutely love it--you may be from the Deep South, where okra is king. They bread the slender green pods and deep-fry them. And they pickle them. It's also a key ingredient in gumbo.

Indeed, it's a vegetable rich in Vitamin C, fiber and potassium.

But if you're a garden spider living in the Good Life Garden at the University of California, Davis, you depend on the tall okra plants to weave your web and trap insects. Then you can spin them around, wrap them tighter than a ball of string, and feast on them later.

The Good Life Garden is located behind the Robert Mondavi Institute for Wine and Food Science on Old Davis Road. It's a well-cared for garden chock full of fruits, vegetables, herbs and ornamentals.

And predators and prey.

Its aim, according to its website, is "to educate the public on how to buy and plant seasonal vegetables for the best taste and highest nutritional content. Each season the garden's planting list will be available online along with information on how to grow, harvest, buy, and cook the various plants, herbs, and fruits found in the garden."

The garden is aptly named. The Good Life.

Good for people, predators and prey. 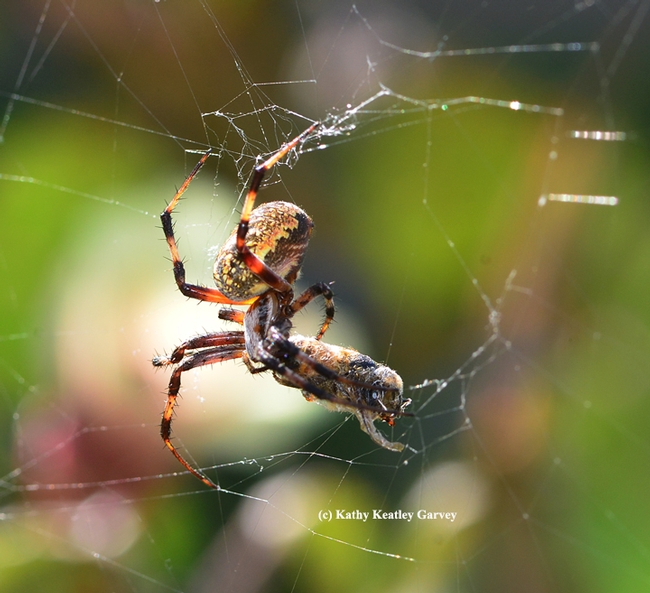 A garden spider wraps its prey, a honey bee, in The Good Life Garden. (Photo by Kathy Keatley Garvey) 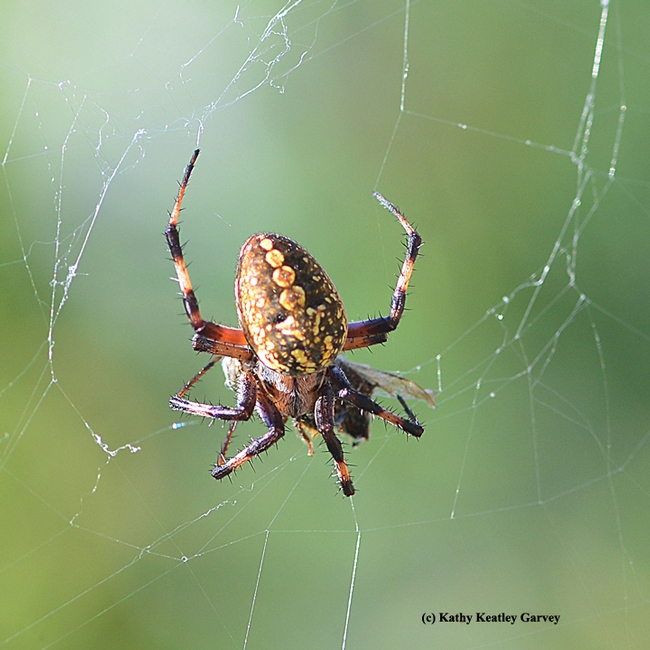 Oh, what serious webs they weave.

They rid the garden of many flying insects, such as gnats, mosquitoes, and moths.

Occasionally a honey bee becomes entangled in the web. The orb weavers are not particular in what they kill, wrap, and eat. It's part of the fabric of life.

This orb weaver (below) is a western spotted orb weaver, Neoscona oaxacensis, as identified by senior museum scientist Steve Heydon of the Bohart Museum of Entomology at the University of California, Davis. Notice the round abdomen and the spots.

If you want to see some other garden spiders, check out the UC IPM website. Also, access BugGuide.Net, where scientists and citizen scientists have posted some great images of these amazing western spotted orb weavers. 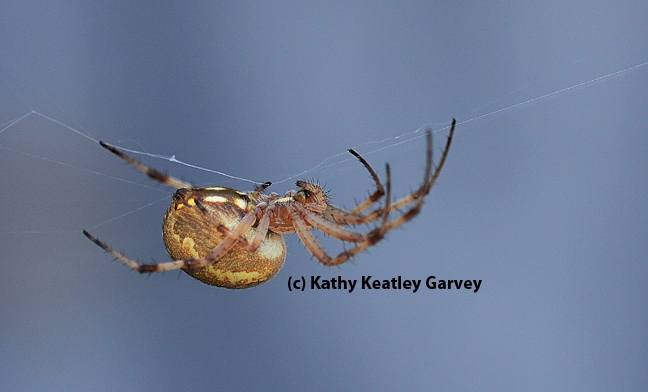 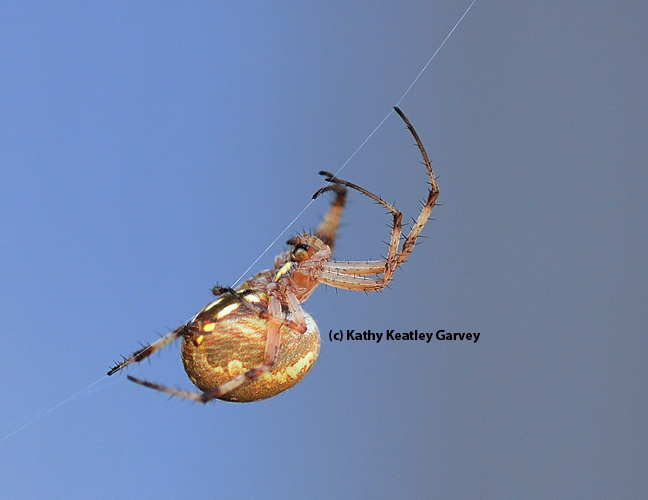 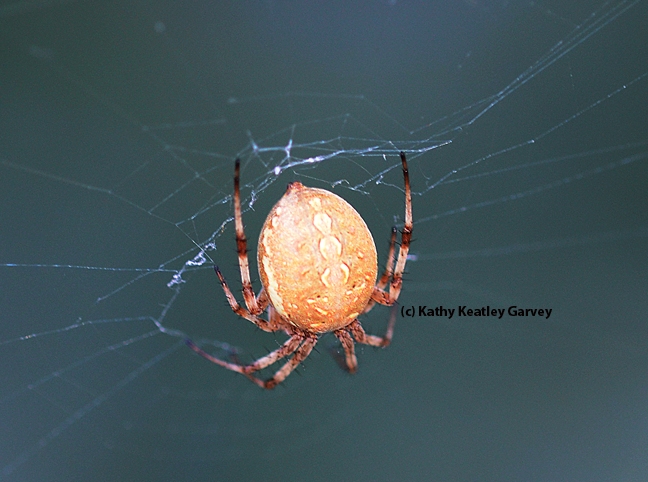 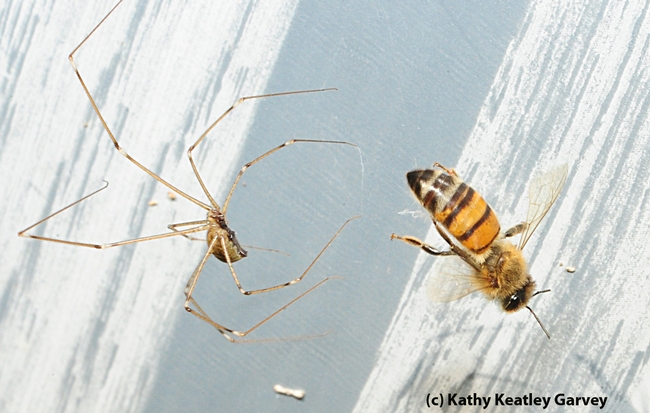 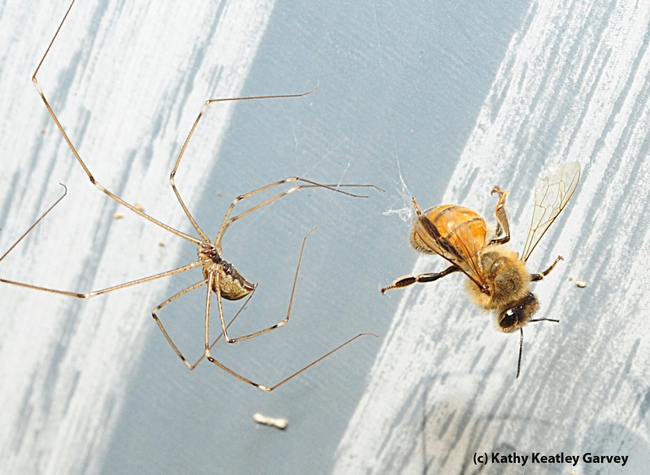 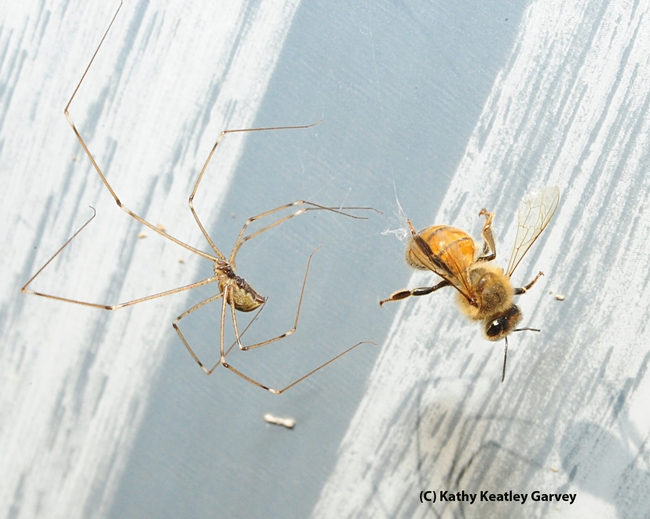 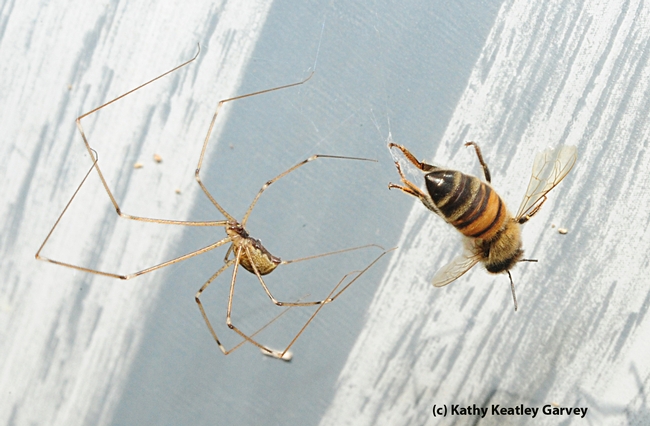 When Van Morrison wrote the lyrics to "Days Like This," a song popularized by The Shirelles, he probably wasn't thinking of a mama garden spider or her prey.

Garden spiders are good to have in the garden when they're capturing and eating pests, like flies, knats, mites, lygus bugs, katydids and the like. Just wish they'd quit picking on the pollinators.

Still, Mama has to eat. 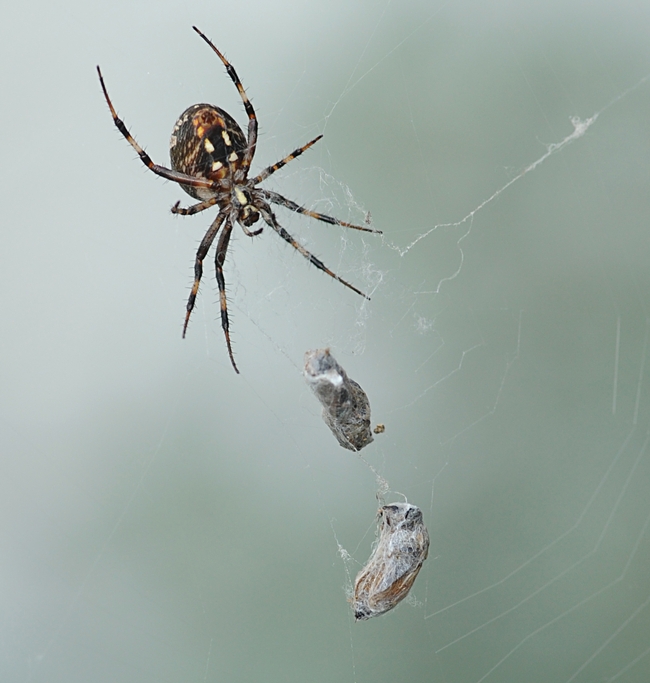