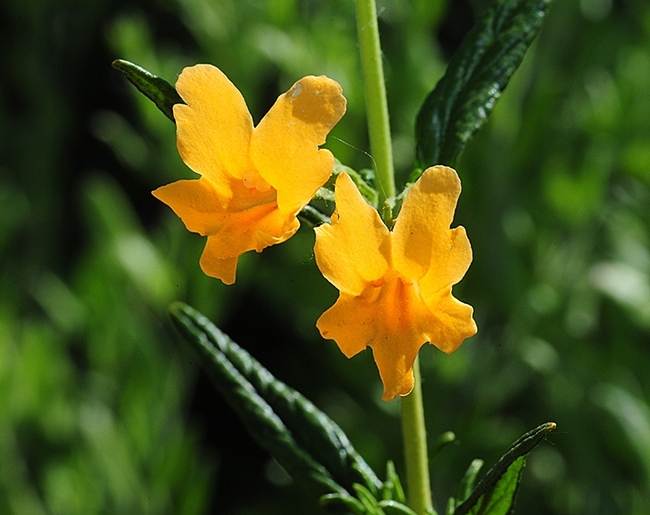 How often do you see a honey bee "standing upright" to reach nectar?

"Well, I guess I could just buzz up there and grab some nectar! But why not stay right here where I am and just s-t-r-e-t-c-h  like a giraffe to get it?"

Me thinks she was just taking a short cut to the sweet stuff and being a little territorial as other bees buzzed around her.

Our honey bee will return to the hive where workers will process the nectar into honey. Humans will get some of it, too.

If you'd like to sample honey--and mix with entomologists--mark your calendar for Saturday, April 22 and "bee" at Briggs Hall for the annual honey tasting, just one part of the 200 some events at the 103rd annual UC Davis Picnic Day. It's an all-day campuswide open house aimed to educate, inform and entertain. 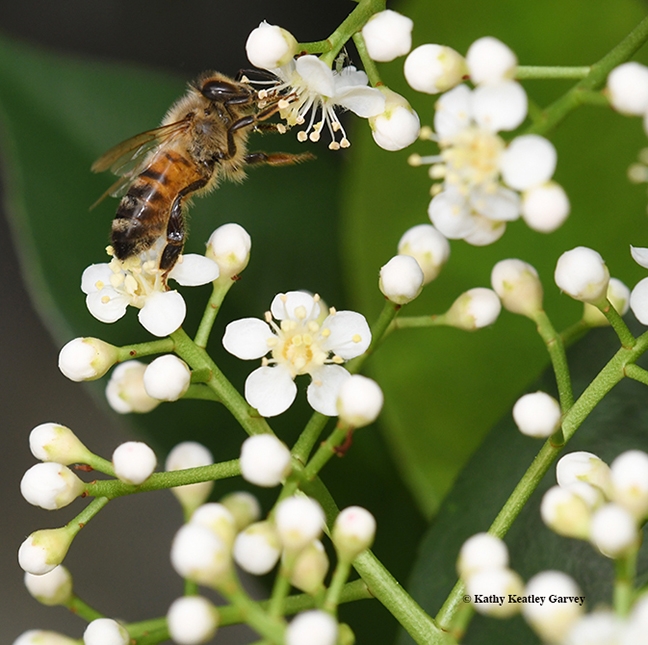 A honey bee "stands upright" to reach the nectar on a Photinia blossom. (Photo by Kathy Keatley Garvey) 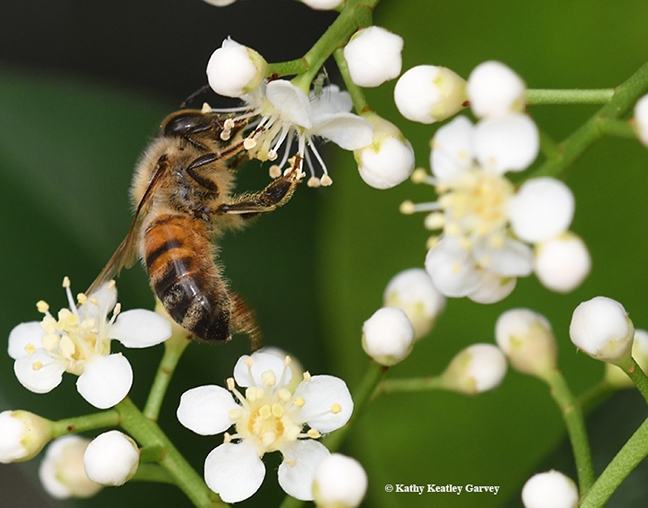 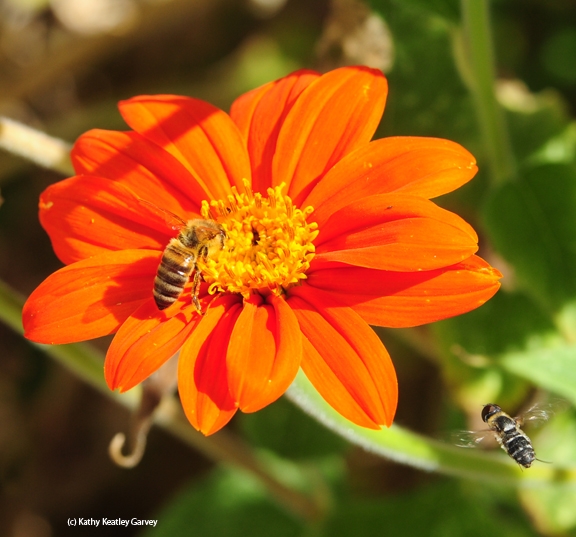 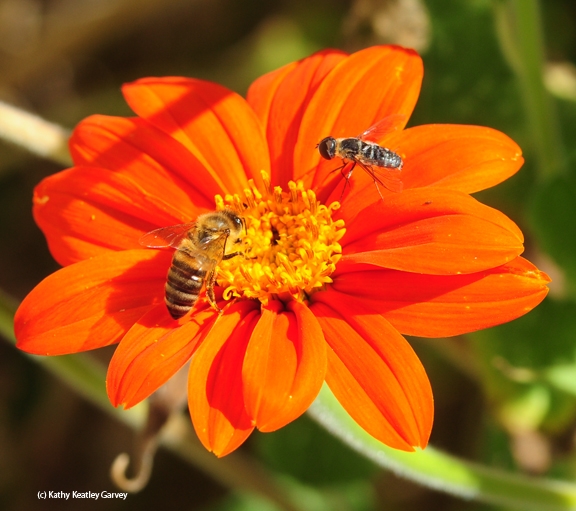 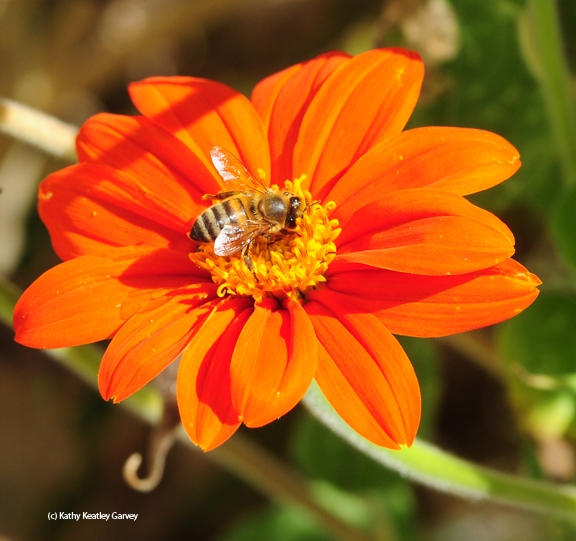 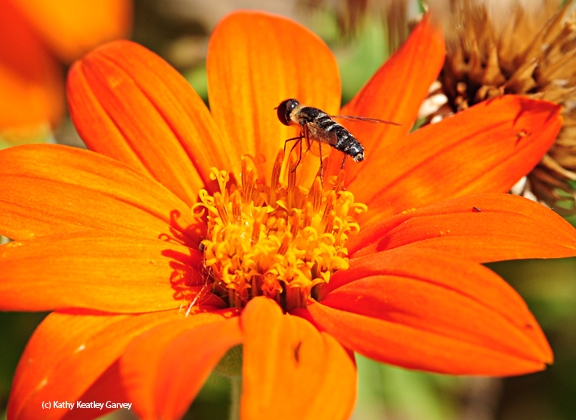 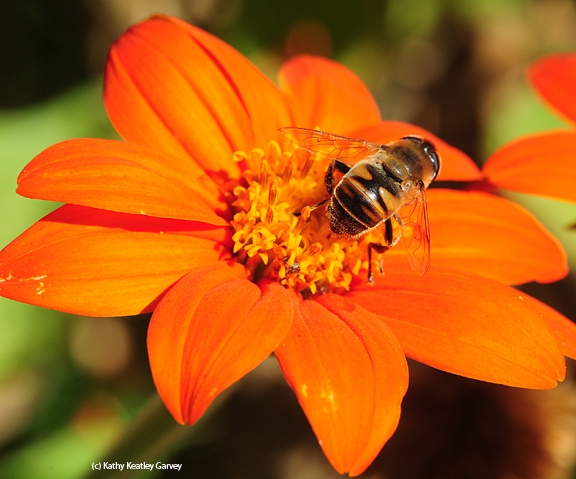 A cream-colored pollen load on a honey bee foraging on a cherry laurel. (Photo by Kathy Keatley Garvey)
It's definitely a bee friendly plant, packed with nectar and pollen.

The cherry laurel, Prunus caroliniana, a member of the rose family, draws honey bees as if there's no tomorrow. Native to the southeastern United States, it can double as a 15-to-36-feet-tall hedge, screening neighbors from neighbors, as well as providing ample food for birds when the tiny black cherrylike fruit develops.

But the bees...the bees...if you've ever seen bees work the spring blossoms, gathering the cream-colored pollen and the nectar to take back to their colonies, you know how frenetic they can be.

Back at the hive, the nectar turns into cherry-laurel honey....hmmm.

Speaking of honey, the so-called "nectar of the gods," how much honey does an average California colony produce?

California Extension apiculturist (emeritus) Eric Mussen, whose career spanned 38 years, was recently asked that question. When he joined the faculty at the UC Davis Department of Entomology and Nematology--that was during the 1976-77 drought--he was told that the average honey production per hive was around 29 to 35 pounds. Today the figure often quoted is 60 pounds.

"Later I learned that the 'average' honey production--years with "normal" rain--is not average across all our beekeepers," Mussen related. "The queen and bulk bee producers in northern California have never made much of any honey, especially after yellow starthistle fell victim to the USDA biocontrol program.

"The San Joaquin Valley beekeepers were more likely to approach the state average.  They could obtain some honey from the crops they were pollinating and some from the wildflowers, especially in the hills surrounding the valley. It was the Southern California beekeepers who made up the difference.  Production of 100-plus pounds could be common."

What about honey production today, in the throes of the California drought? "For the last few years, we have been having 1976-77-type crops," Mussen said. "The northern beekeepers basically have no honey unless they take their colonies out of state.  The San Joaquin Valley beekeepers probably are averaging around 30 pounds or so, and the southern beekeepers would be lucky to be getting around 60."

The few years when California experienced high rain and floods--back in the 1980s and 1990s--beekeepers throughout the state reported an average of 90-plus pounds per colony. "Even the northern beekeepers produced a little," Mussen said. "However, even if we have a horrendous El Niño event, it probably won't make a huge difference in honey production this coming year.  The seed bank has been terribly diminished by so many consecutive years of drought."

"While we can never predict exactly who is going to get the honey and how much, this is the way things generally tend to go in California," Mussen noted. "Our bees, and our beekeepers, are really hurting for nectar and honey right now."

There's not much blooming right now. But for those "lucky" honey bees with access to a 30-foot-high hedge of luxuriant cherry laurel, as in our yard, life is good.

That's when life is just a bowl of cherries (cherry laurels). 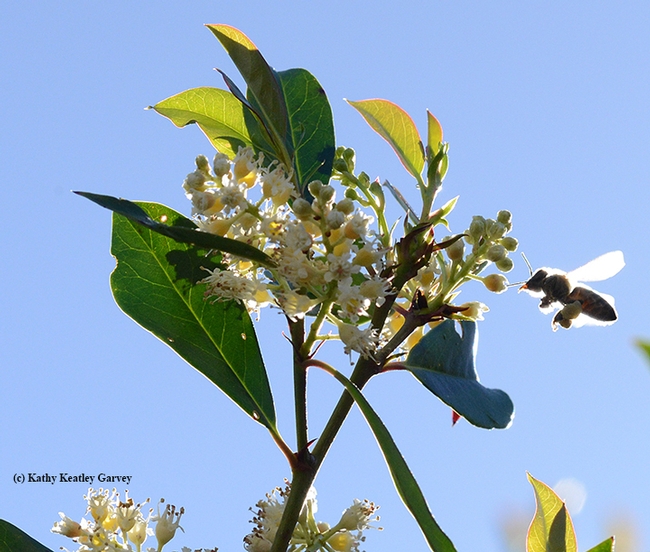 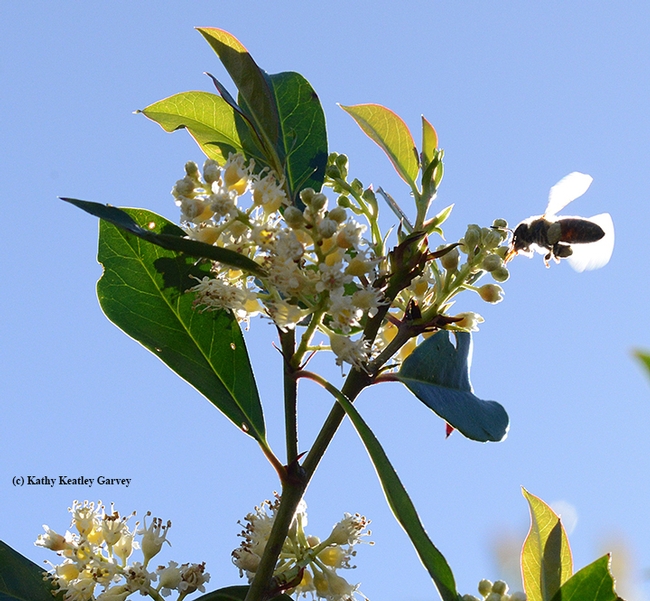 The anticipation of nectar and pollen is intense. (Photo by Kathy Keatley Garvey) 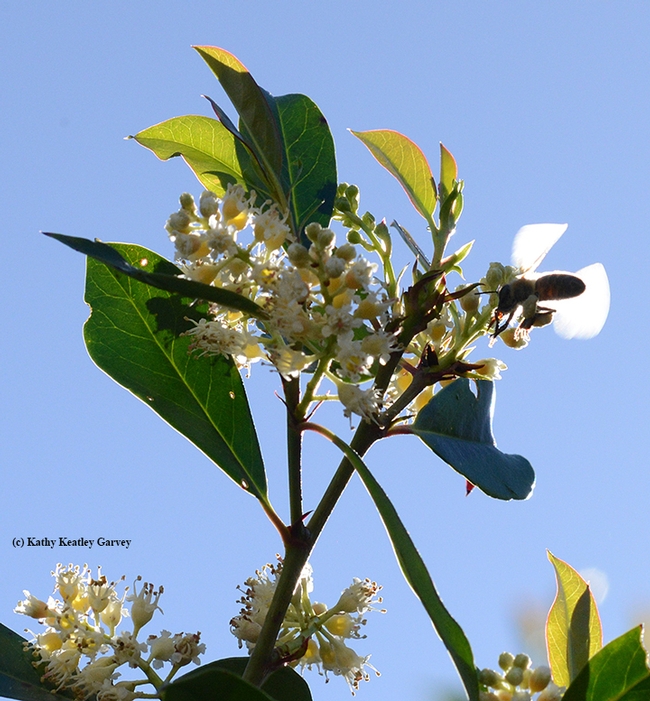 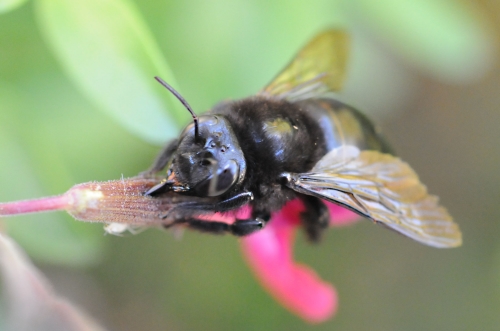 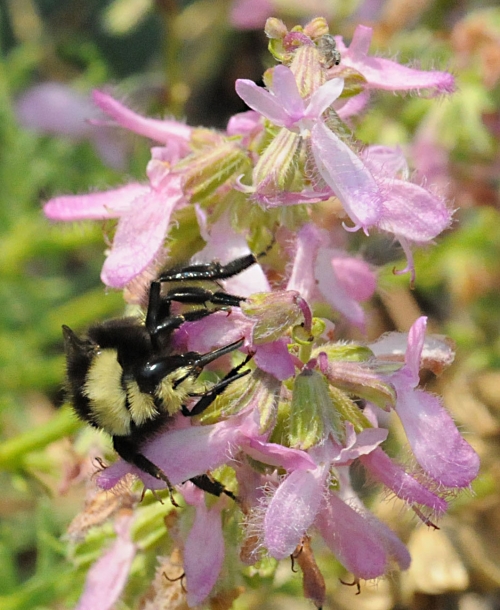