Bug Squad
sitenum=63
Happenings in the insect world
Pro Bee, All the Way

The folks who devote their entire lives to honey bees--how do they begin?

Well, if you're Eric Mussen, Extension apiculturst at the University of California, Davis, it begins in childhood with a fascination for insects and the walks in the woods with your grandfather, who explains the flora and fauna to you.

Then when you graduate from college and attend graduate school, your mentor makes sure you're stung by a bee before you can join his research team.

M.E.A. "Mea" McNeil tells the story of Eric Mussen in a fascinating two-part series in recent editions of the American Bee Journal.

Honey bee guru Eric Mussen, a fixture in the Department of Entomology since 1976, will do just about anything to help the bees and the beekeeping industry. He fields calls from his Briggs Hall office from commercial beekeepers, small-scale beekeepers, hobbyists, beginning beekeepers, 4-H'ers, pest control advisors, growers, assorted industry representatives, legislators, news media and the general public.

And that's just to name a few. Fact is, he'll answer any question from the simple to the complicated.

One of my favorite photos of Eric Mussen is really of a bee stinging him at the Harry H. Laidlaw Jr. Honey Bee Research Facility at UC Davis. At the time, we were doing a hive check and an irritated bee landed on his wrist.

"It's going to sting me," he said, alerting me to a pending "photo opportunity."  He knew my macro lens was ready to go. Eight frames a second.

One of them is below.

I told him he could be my "hit man" any time.

If you want to read more about "the bee guy," check out the news story posted on the UC Davis Department of Entomology website, which links to McNeil's two articles in the American Bee Journal.

Pro bee, all the way. 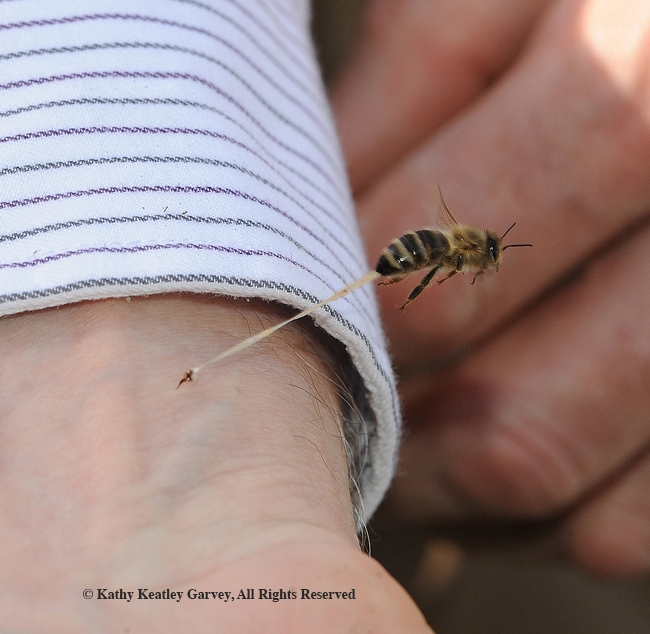 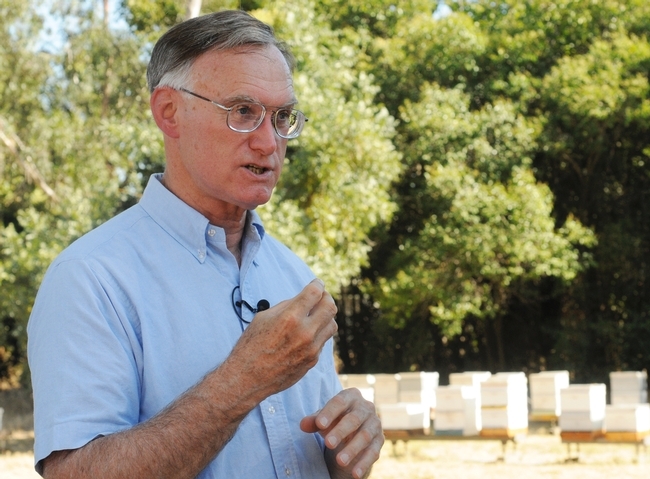