It's National Moth Week, which, according to the officials, is a time to celebrate "the beauty, life cycle and habitats of moths."

So "moth-ers" of all ages and abilities "are encouraged to learn about, observe and document moths in their backyards, parks and neighborhoods."

We remember, pre-COVID pandemic days, when the UC Davis Bohart Museum of Entomology celebrated National Moth Week with a Moth Night. (See what the entomologists collected at the 2019 Moth Night.)  Earlier, Jessica Gillung, a doctoral candidate at UC Davis, posed with Atlas moths from the museum. Time flies--as do the moths.

Jessica went on to receive her doctorate from UC Davis in December 2018, writing her dissertation on “Systematics and Phylogenomics of Spider Flies (Diptera, Acroceridae)," encompassing genomics, phylogenetics, systematics, and comparative analyses.  She is now an assistant professor at McGill University, Montreal.

If COVID-19 precautions hadn't temporarily closed the Bohart Museum, entomologist Jeff Smith, curator of the Bohart's Lepidoptera collection, would be there to talk moths and how they differ from butterflies.

Smith estimates that of the 17,500 described species of butterflies in the world, about 750 of those occur in North America. "However, in North America there's 160,000, easily, species of moths. Moths are far more numerous than butterflies, and in particular, with the little tiny moths, it's estimated by experts in those groups, that at least 90 percent of the species still have not been described. They are sitting waiting for someone to identify them and give a name to them. So if anybody is interested in insects and wondering if there's still something left to do, the answer is absolutely yes."

At the 2021 UC Davis Picnic Day, the 107th annual, Smith delivered a well-received presentation on "Mimicry in the Butterflies and Moths with Jeff Smith." If you missed it, it's available online on YouTube at https://youtu.be/8ZccezxhhK4.

Meanwhile, turn on your porch light and see what's flying around...like a moth to a flame (light). 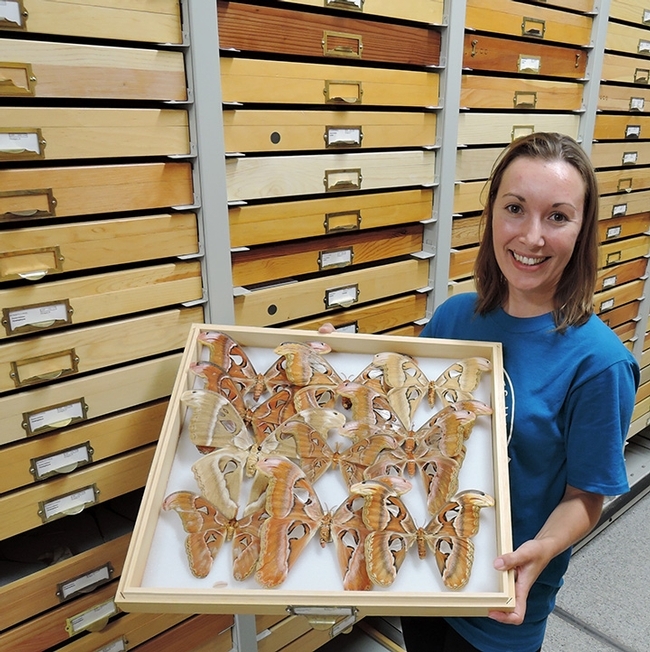 Jessica Gillung, then a doctoral candidate at UC Davis, holds a display of Atlas moths at the Bohart Museum of Entomology. She is now an assistant professor McGill University, Montreal. This week is National Moth Week. (Photo by Kathy Keatley Garvey) 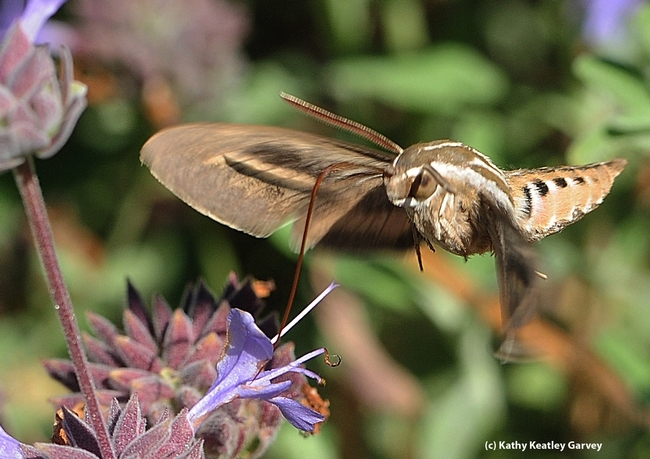 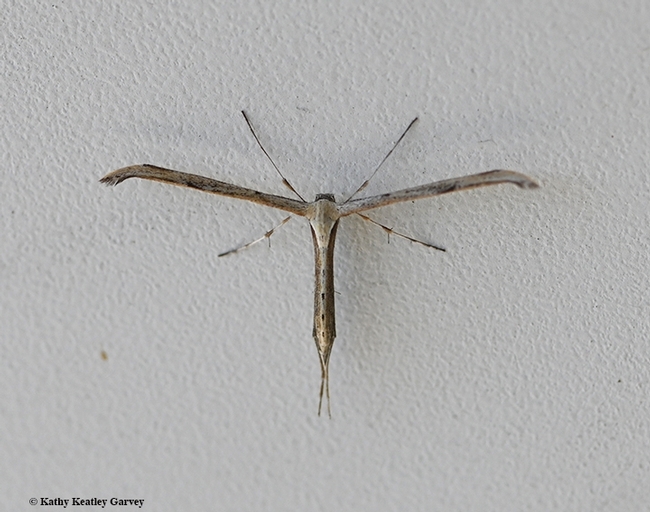 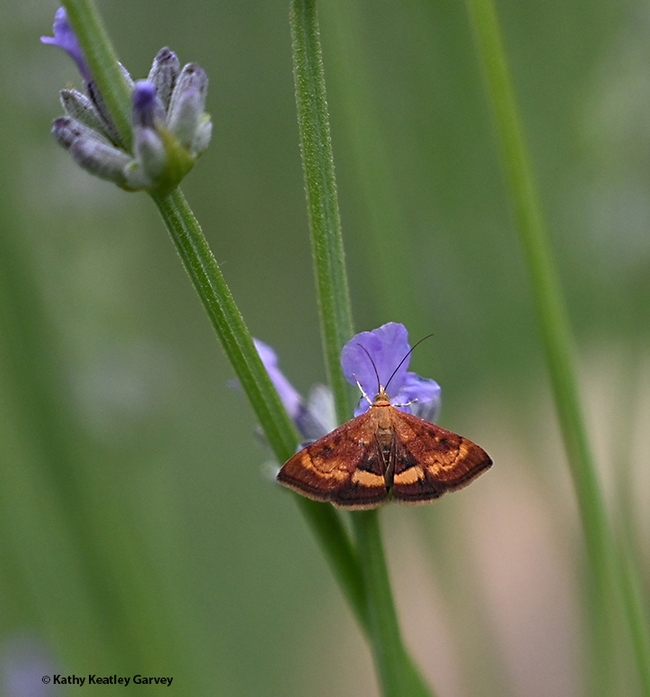 A noctuid moth collected from a front porch light in Vacaville, Calif. It is perched on a jade plant. (Photo by Kathy Keatley Garvey)
Ready...set...go! It's almost time to celebrate moths!

How much do you know about moths? Do you know the difference between a moth and a butterfly? Have you ever seen some of the world's largest moths, such as the Atlas moth? Have you ever collected noctuid moths on your front porch light?

In keeping with "International Moth Week, Exploring Nighttime Nature (July 23-31)," the Bohart Museum of Entomology at the University of California, Davis, will celebrate moths at its evening open house from 8 to 11 p.m., Saturday, July 30.  The theme, appropriately enough, is "Celebrate Moths!"

And that's exactly what will happen! It promises to be informative, educational and fun!

Activities, free and open to the public, will take place inside the museum, located in Room 1124 of the Academic Surge Building on Crocker Lane, and outside the building, where black lighting will be set up to observe and collect moths and other insects.

Entomology graduate student Jessica Gillung will participate, "so there will be an entomologist fluent in Spanish and Portuguese on site," said Tabatha Yang, the Bohart Museum's education and outreach  coordinator. In addition to her fluency in English,  Spanish and Portuguese, the multilingual Gillung speaks a little German.

A fourth-year graduate student, Gillung studies with major professor Lynn Kimsey, director of the Bohart Museum and UC Davis professor of entomology. Gillung is a member of the reigning championship Linnaean Games team, the UC Davis graduate student team that won the national championship last fall at the Entomological Society of America meeting in Minneapolis. The Linnaean Games is a college-bowl type competition in which student teams answer questions about insects and entomologists. The 2015 questions included "What is the smallest insect that is not a parasite or parasitoid?” (Answer at the end of this blog.)

At Moth Night, visitors are invited to view the Bohart Museum's vast collection of worldwide moth specimens and participate in family friendly craft activities featuring a moth motif. Scientists will explain how to differentiate a moth from a butterfly. Free hot chocolate will be served.

Moths continue to attract the attention of the entomological world and other curious persons. Scientists estimate that there may be more than 500,000 moth species in the world. They range in size from a pinhead to as large as an adult's hand. Most moths are nocturnal, but some fly during the day, as butterflies do. Finding moths can be as “be as simple as leaving a porch light on and checking it after dark,” according to International Moth Week officials.  “Serious moth aficionados use special lights and baits to attract them.”

(Note: Answer to the Linnaean Games question: "What is the smallest insect that is not a parasite or parasitoid?" If you guessed, "Beetles in the family Ptiliidae," you're right!) 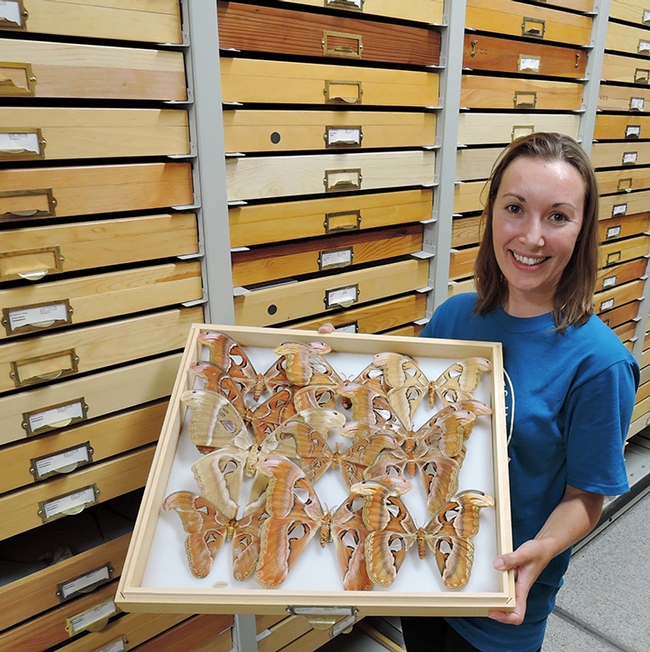 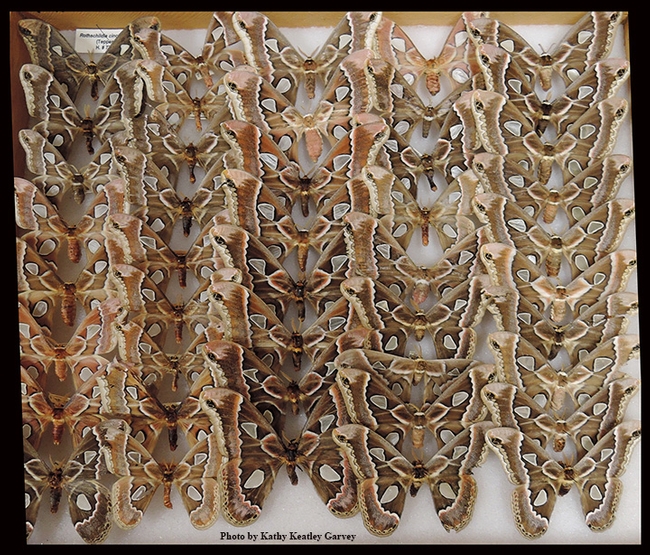