Bug Squad
sitenum=63
Happenings in the insect world
Wish You WAS Here! Top 10 Reasons Why You Should 'Bee' Here at UC Davis Sept. 5-8

Have you ever received an email, text or postcard from vacationing family or friends with the lead sentence: "Wish you were here?"

Excitement is building for the 40th anniversary conference of the Western Apiculture Society (WAS) of North America, headed by president Eric Mussen, Extension apiculturist emeritus. WAS returns to its roots on Sept. 5-8 and will be meeting here in Davis. The organization was founded at UC Davis by professor Norm Gary (his idea); postdoctoral fellow  Becky Westerdahl, and Eric Mussen, then a new faculty member. Gary is now an emeritus professor; Westerdahl is a Extension nematologist with the UC Davis Department of Entomology and Nematology; and Mussen, although retired, maintains an office in Briggs Hall where he continues answering questions about bees.  This is also his sixth term as WAS president, so the "R" word does not mean "Relax."

Becky Westerdahl, co-founder of WAS

Norm Gary, co-founder of WAS
We asked Eric Mussen for 10 reasons why folks might want to attend the conference, which is open to all interested persons, and registration is now underway. WAS defines itself as "a non-profit, educational, beekeeping organization founded in 1978 for the benefit and enjoyment of all beekeepers in western North America. Anyone can join, but  the organization is specifically designed to meet the educational needs of beekeepers from Alaska, Arizona, California, Colorado, Hawaii, Idaho, Montana, Nevada, New Mexico, Oregon, Utah, Washington, and Wyoming as well as the provinces of Alberta, British Columbia, Saskatchewan and the Yukon.

The 2017 WAS Conference will provide the following opportunities, according to honey bee guru "Dr. Eric":

Another big draw is leadoff speaker and Sonoma County beekeeper Serge Labesque, "who has organized a terrific presentation on the natural seasonal growth and decline of a healthy honey bee colony population living in a hollow tree," Mussen said.

Okay, that's an even dozen!

You can learn more about the WAS meeting on its website.  (And be sure to register so you can send your family and friends a note saying "Wish you WAS here.") 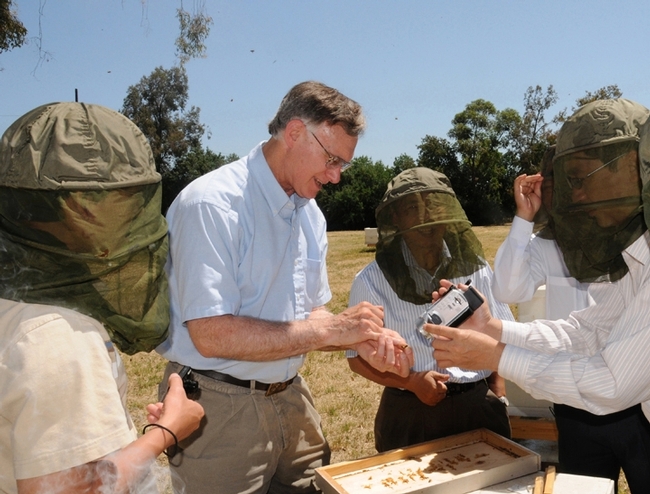 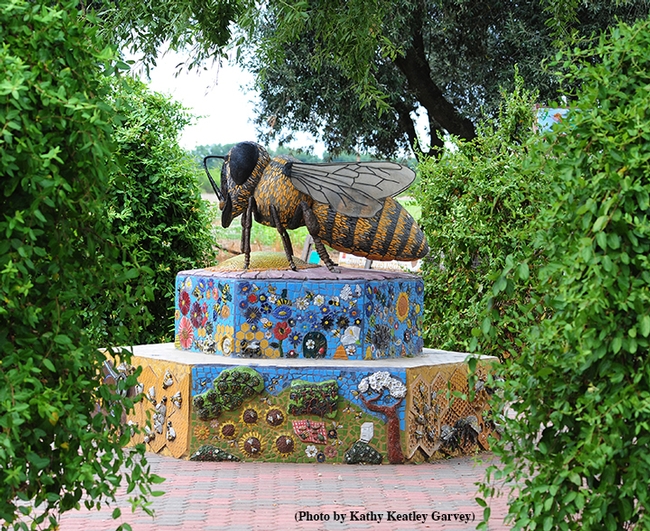 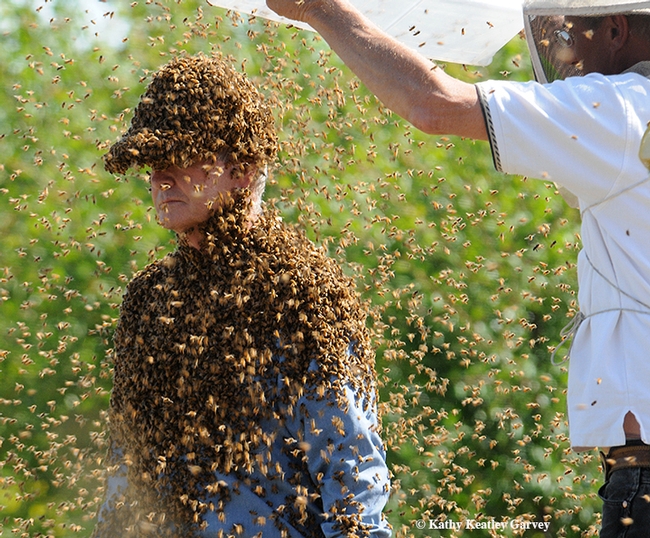 Noted bee scientist, bee wrangler and author Norm Gary, emeritus professor, UC Davis Department of Entomology and Nematology, suits up for a bee wrangling demonstration. He spearheaded the founding of the Western Apicultural Society. (Photo by Kathy Keatley Garvey)
Tags: Becky Westerdahl (2), conference (2), Eric Mussen (250), Norm Gary (28), WAS conference (1), Western Apicultural Society (29)
Comments: 2
It's All the Buzz: WAS to Meet in Davis in 2017 Eric Mussen
It's all the buzz.

Fortieth anniversary? Is that possible? It is. The group traces its beginnings back to 1977 and founders Norm Gary, UC Davis professor of entomology and noted bee wrangler; newly hired Extension apiculturist Eric Mussen; and Becky Westerdahl, who had just received her doctorate in biology/nematology from UC Riverside. Both Gary and Mussen are retired. (Don't mention the "R" word to them, though! Mussen continues to maintain an office in Briggs Hall, UC Davis, and Gary is a jazz musician who keeps busy playing the "B" or "Bee" flat clarinet, among other instruments.) Westerdahl went on to become an Extension nematologist, based in the UC Davis Department of Entomology and Nematology.

Mussen will serve as the program coordinator for the 2017 event, to be held in the Activities and Recreational Center (ARC) on campus.  He is already planning a program that will showcase the Harry H. Laidlaw Jr. Honey Bee Research Facility on Bee Biology Road, and the adjacent Häagen-Dazs Honey Bee Haven, a half-acre bee friendly garden operated by the UC Davis Department of Entomology and Nematology.

Meanwhile, WAS will be meeting in a few weeks--Oct. 13-15--in Honolulu. Two of the speakers are from UC Davis:  Eric Mussen, who will discuss pesticides;  and Extension apiculturist Elina Lastro Niño, an expert in queen breeding.

What's WAS all about? Mussen, a five-time president, remembers hammering out the mission with his colleagues:  "WAS is a non-profit, educational, beekeeping organization founded in 1978 for the benefit and enjoyment of all beekeepers in western North America. Membership is encouraged from anywhere in the world. However, the organization is specifically designed to meet the educational needs of beekeepers from the states of Alaska, Arizona, California, Colorado, Hawaii, Idaho, Montana, Nevada, New Mexico, Oregon, Utah, Washington, and Wyoming as well as the provinces of Alberta, British Columbia, Saskatchewan and the Yukon." Current president is Ethel Villalobos of Hawaii. Niño serves as the second vice president.

The entire country--indeed the entire world--is worried about bee health and the declining bee population. The United States has about 2.6 million colonies, Mussen says, while the number of colonies in California is approximately half a million. 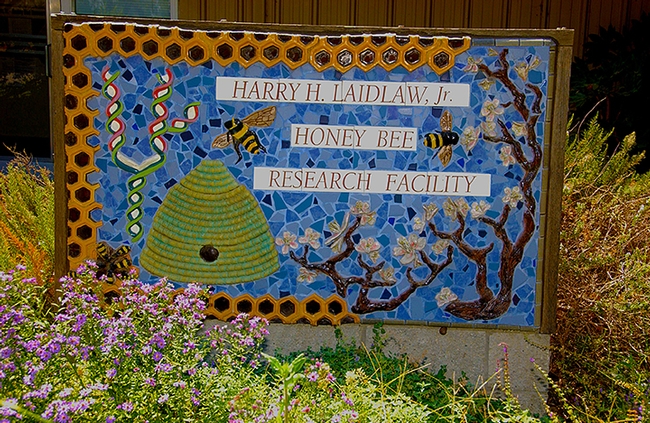 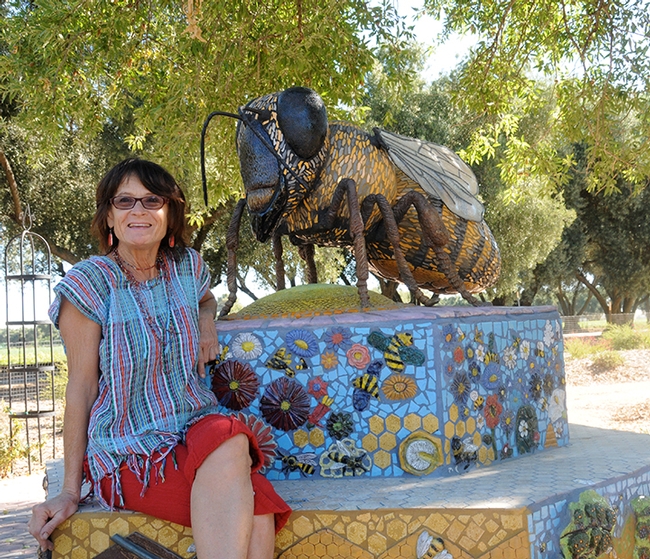 This is "Miss Bee Haven," a worker bee ceramic-mosaic sculpture that anchors the Häagen-Dazs Honey Bee Haven. It is the work of Donna Billick (shown) of Davis, a self-described "rock artist." (Photo by Kathy Keatley Garvey) 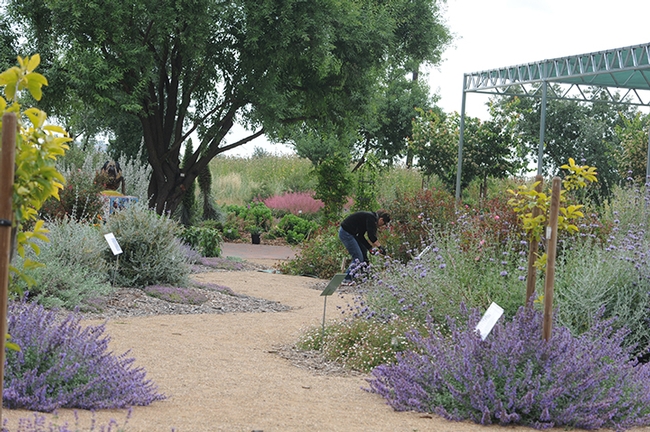