But they're much more than that. Much more.

Ant specialist Brian Fisher, an entomologist with the California Academy of Sciences, San Francisco, describes ants as "industrious, tenacious workers who live in colonies and obey a hierarchy of rulers."

And they're also massive.

Fisher, associate curator of entomology at the California Academy of Sciences and an adjunct professor of biology at both the University of California, Berkeley and San Francisco State University, will deliver the 2011 Thomas and Nina Leigh Distinguished Alumni Seminar, UC Davis Department of Entomology.

Fisher, who just returned from a collecting trip in Madagascar, will speak on “How Many Ants Can an Island Hold? Exploring Ant Diversity in Madagascar" from 6:15 to 7:15 p.m. on Wednesday, Nov. 9 in the Recreation Pool Lodge on La Rue Road, UC Davis. The lecture is free and open to the public.

He'll be honored at a reception set from 5 to 6 p.m. in the Rec Pool Lodge.

Often found hip-deep in Madagascar mud, Fisher is a self-described modern day explorer who has devoted his life to the study and conservation of ants and biodiversity around the world. His research sends him through the last remote rainforests and deserts of Madagascar and Africa in search of ants. Although his subjects may be small in stature, they make a huge impact on their ecosystems.

By documenting the species diversity and distribution of this “invisible majority,” Fisher says he's helping to establish conservation priorities for Madagascar, identifying areas that should be set aside to protect the highest number of species. Along the way, he has discovered hundreds of new species of ants.  He has published more than 75 peer reviewed articles including Ants of North America with Stefan Cover.

Every year, Fisher trains dozens of international graduate students in the taxonomy and natural history of ants, providing them with skills to use ants as an important indicator of biodiversity across the globe. He has appeared in a number of BBC, Discovery Channel, and National Geographic films and has been profiled in Newsweek and Discover magazines.

So, for the last 23 years, Brian Fisher has traveled the globe finding, collecting, identifying and naming ants, describing their behaviors, and cataloguing their traits. Of the estimated 22,000 ant species known to science, Fisher has personally discovered 1000 species.

Born in Normal, Ill., the son of a college professor and a fifth grade teacher, Brian Fisher always knew he wanted to work outdoors. But for awhile, he didn't know what. The day after his high school graduation, he caught a flight to Europe and spent two years bicycling the continent, learning French and carpentry before returning home.

Once he returned to the states, he enrolled at the University of Iowa, majoring in biology. “But I was itching to get to Latin America, learn Spanish and live the dream of a tropical plant collector,” he remembers. It was during a year in Panama that he worked part-time for the Smithsonian Tropical Research Institute. He also worked as an aspiring botanist, collecting specimens of tropical flora.

It was during his stay in Panama that the love bug bit. Ants!

“You go to the tropics and the sheer diversity of insects are literally raining down on you,” Fisher says.  “At that point, I decided to switch from being a great botanical explorer to becoming an ant finder.”

The Nov. 9th UC Davis seminar memorializes cotton entomologist Thomas Frances Leigh (1923-1993), an international authority on the biology, ecology and management of arthropod pests affecting cotton production. During his 37-year UC Davis career, he was based at the Shafter Research and Extension Center, also known as the U.S. Cotton Research Station. He researched pest and beneficial arthropod management in cotton fields, and host plant resistance in cotton to insects, mites, nematodes and diseases.

And we're sure Tom Leigh encountered a number of ants along the way, but not as many nor as diverse as Brian Fisher has. 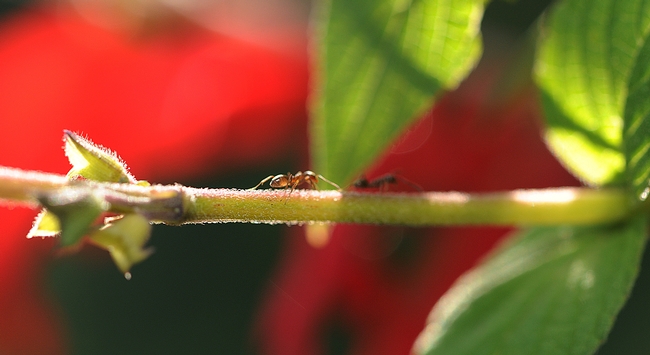