An intact Buckeye butterfly. (Photo by Kathy Keatley Garvey)
Wanna piece of me?

"Hey, Buckeye butterfly, you over there with chunks of a wing missing, yeah you, what happened?"

"Well, it was like this. I was just fluttering around, looking for some good nectar, and a predator grabbed me. I don't know what it was. Maybe it was a praying mantis. Maybe it was a bird or a spider. I don't know. It happened so fast. But anyhow, I lost a couple of eyespots. Yes, it got a piece of me. But it didn't get all of me. I'm still here!"

It's the eyespots--or the missing eyespots--you notice first about the Buckeye butterfly, Junonia coenia.

The eyespots are thought to offer some kind of protection from predators.

"Predators think the eyespot is an eye on the head of its prey," according to the Conservancy of Southwest Florida website. "If the predator attacks the eyespot, it might chew off part of the butterfly's wing, but the butterfly's vital organs escape damage."

Butterfly guru Art Shapiro, UC Davis distinguished professor of evolution and ecology, who has studied the butterfly populations of the Central Valley since 1972, writes about the Buckeye on his website, Art's Butterfly World:

"The Buckeye breeds on plants containing bitter iridoid glycosides, including plantains (Plantago, especially P. lanceolata), various Scrophulariaceae (especially Fluellin, Kickxia), and Lippia (Lippia or Phyla nodiflora). The spiny, black-and-white caterpillar has a bright orange head. Its behavior suggests its diet makes it virtually immune to vertebrate predation, but the pupa and adult are quite edible.

"Male Buckeyes are territorial perchers, usually on bare ground. Both sexes visit a great variety of flowers, from Heliotrope and Lippia to California Buckeye and Rabbitbrush! They often swarm over Coyotebrush (Baccharis) in autumn, especially the male plants.

And always, always, the Buckeyes need to keep an eye out for their predators. 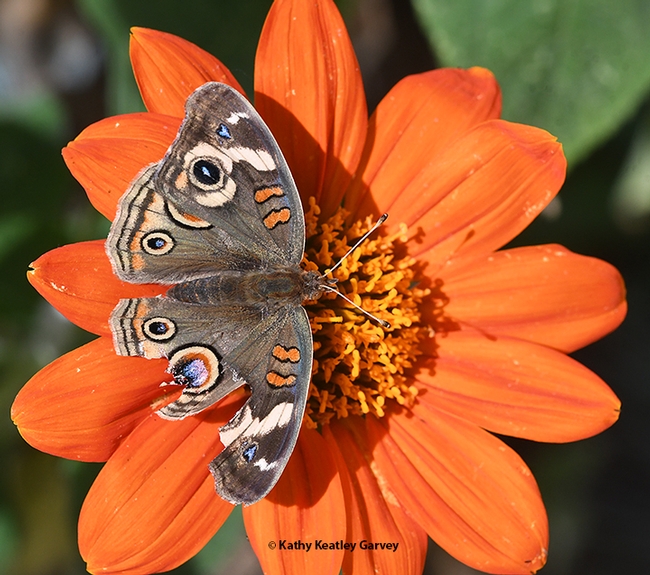 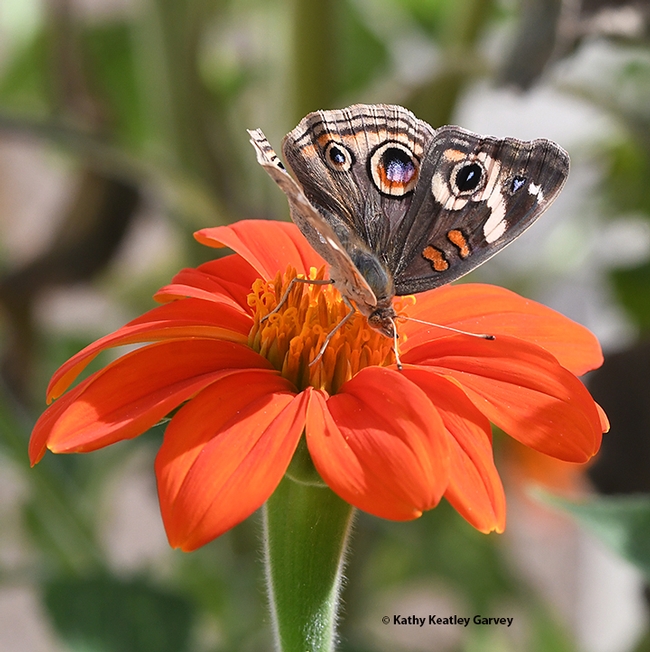 A Buckeye butterfly can't get enough of the nectar of the Mexican sunflower, Tithonia rotundifolia. (Photo by Kathy Keatley Garvey) 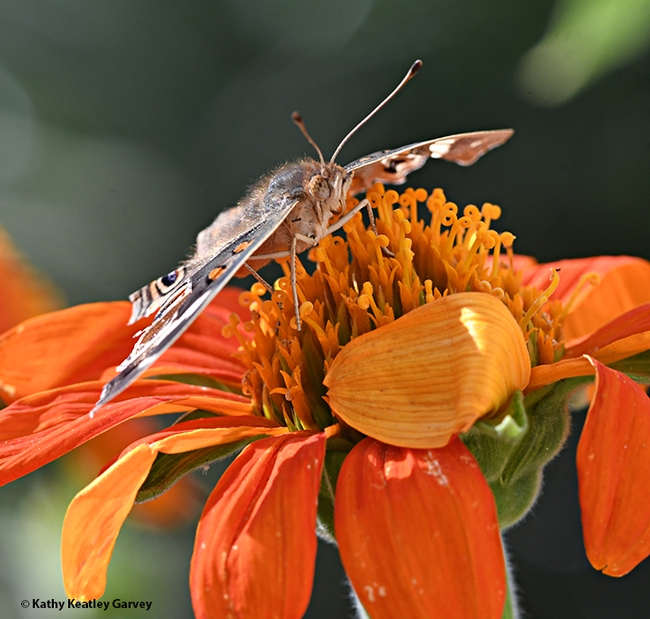