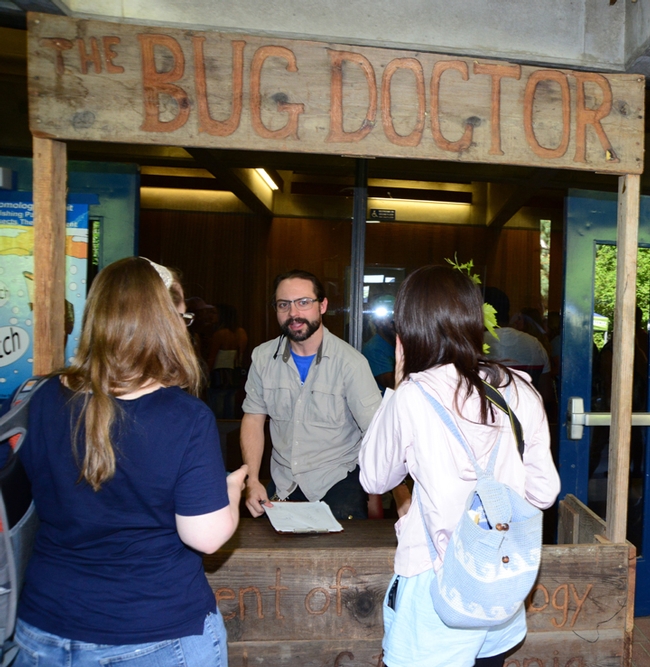 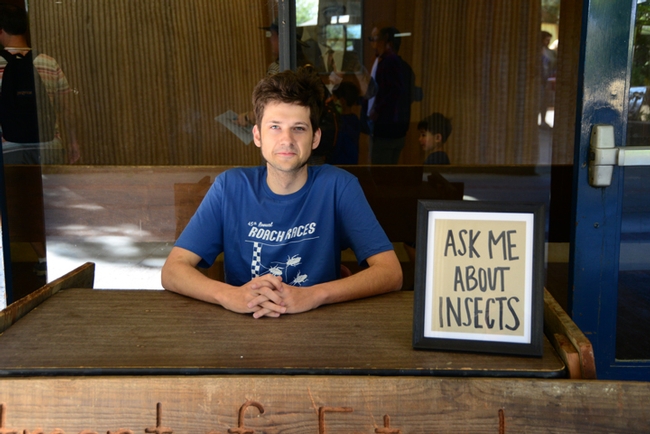 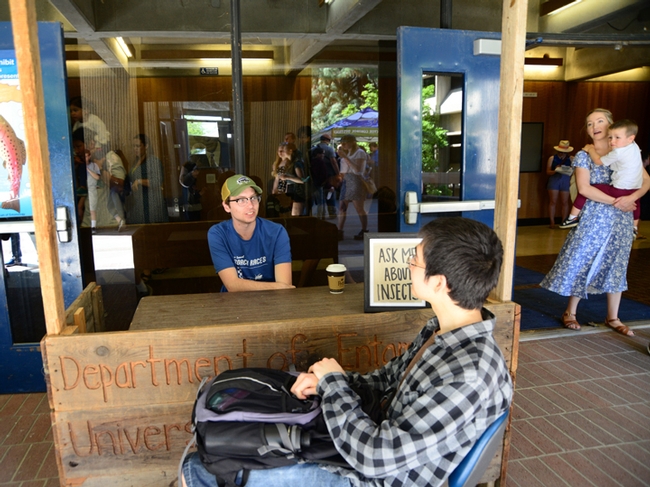 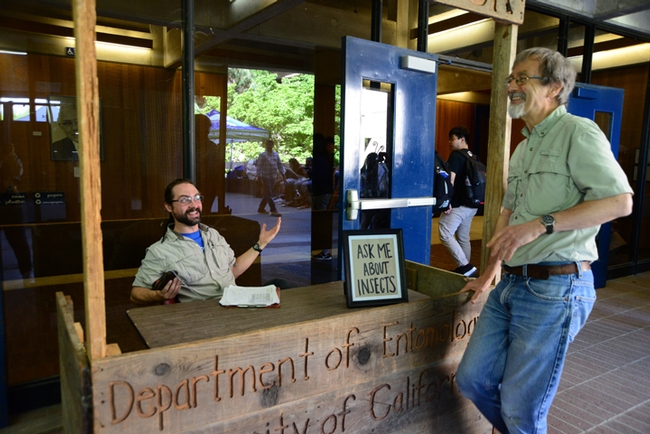 And attendees did. They asked questions, expressed concerns, and offered comments.

"Bug Doctor" Boudinot, a doctoral candidate who studies ants in the Phil Ward lab and who co-chaired the UC Davis Department of Entomology and Nematology's Picnic Day Committee, remembers that a little girl asked him "Do bugs get ear infections?"

That was Lilliana Phillips, 5, of Carmichael, who stood in line with her father, William Phillips, a UC Davis alumnus (bachelor's degree in environmental toxicology and master's degree in pharmacology toxicology.

"Good question," Boudinot told her as the crowd smiled.

"I had to think about that one for a while," Boudinot later related. "My best answer is that perhaps mantises, grasshoppers, and cicadas do, as they all have 'ears' (tympana), albeit in different places on their bodies!"

Other questions zeroed in on evolution, insect control, mosquito hawks and butterflies.

"I had a long conversation with an undergraduate about the evolutionary descent of insects and their arthropod kin," Boudinot said. "We discussed the origin of the Arthropoda, the reason why Paleozoic insects were so large, and a number of other topics."

Another undergraduate, a math and economics major, asked Boudinot about the use of differential calculus in his research.

"A number of people asked about insect control, and some even asked plant control questions," Boudinot said. "One woman and her family asked me about 'mosquito hawks.' I informed her that these large flies are not predatory, and have grub-like larvae which feed on decaying material, among other aspects of their natural history."

Another student quizzed him about his knowledge of the color blue in the insect world. "We talked about structural colors. I was unaware that there is a genus of butterfly, Nessaea (Nymphalidae), which has true blue pigmentation--an extreme rarity in the natural world!"  (According to Wikipedia, unlike virtually all other butterflies with blue coloration, the blue colors in this genus are due to pigmentation rather than iridescence--for example,  Morpho species.)

One young boy asked if mosquitoes will ever go extinct. "I told him that mosquitoes will certainly not go extinct in our lifetime. However, there are many many species of mosquitoes which do not bite people, and if he wanted to learn more about them, he could ask the Sacramento-Yolo Mosquito and Vector Control District folks (in the nearby booth).

"The final, long conversation I had was with an engineer who was fascinated by insect anatomy and physiology. The conversation started with the mechanism for insect breathing, led through heart and gut anatomy." Boudinot then headed to Briggs 158 to use the chalkboard to explain how the insect cuticle has a machine function.

The next "Bug Doctor" in the rotation was Zachary Griebenow, a first-year Ph.D. candidate in the Phil Ward lab.

The little girl who asked the "Do bugs have ear infections?" also asked him for his take.

"I said that I doubted it," Griebenow related, "as the auditory organs insects have are chordotonal: essentially, they consist of a scolopidiform sensillum attached to cuticle at both ends. Therefore, as there is no fluid involved, the idea of an infection attacking such a structure seemed unlikely to me."

"Another individual asked me to explain the distinction between arachnids and insects, which I did as one might expect (differences in tagmosis, appendages, etc.)"

Lastly, Griebenow was asked whether insects "answered to the same God as we do."  He responded that he did not have the authority or knowledge to answer the question.

UC Davis entomology graduate students, including Boudinot, are accustomed to answering entomological questions. Boudinot served as a member of the UC Davis Department of Entomology and Nematology's Linnaean Games Team that won the Entomological Society of America's national championship twice: in 2015 and 2016. The ESA Linnaean Games are a lively question-and-answer, college bowl-style competition on entomological facts played between university-sponsored student teams. The teams score points by correctly answering random questions.

Some of the questions the UC Davis team, captained by Ralph Washington Jr., successfully answered in the 2016 competition: 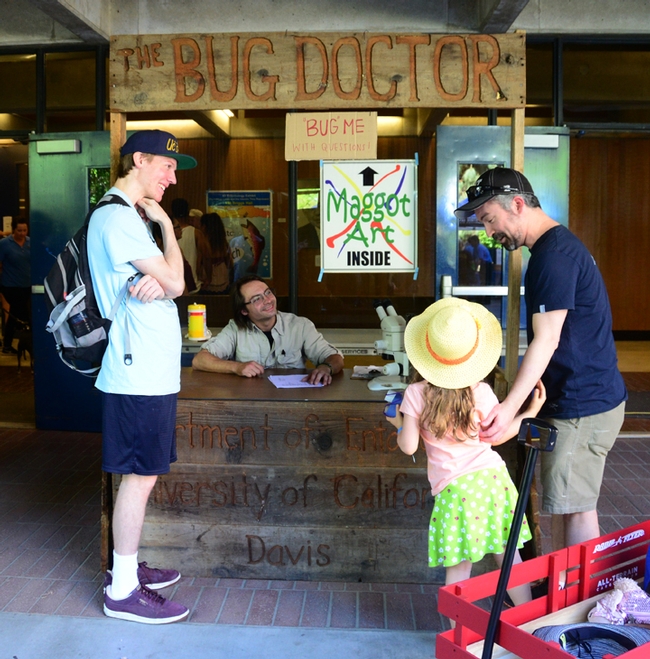 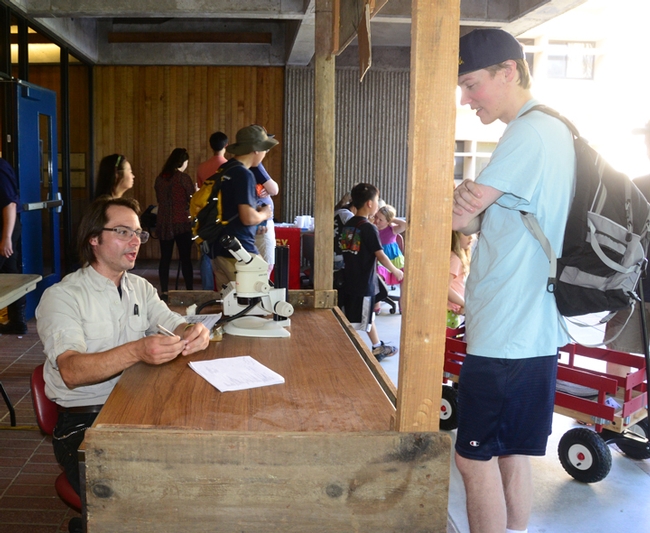 Doctoral candidate Brendon Boudinot of the UC Davis Department of Entomology and Nematology fields a question from a "client" at the Bug Doctor booth at the 104th annual UC Davis Picnic Day. (Photo by Kathy Keatley Garvey) 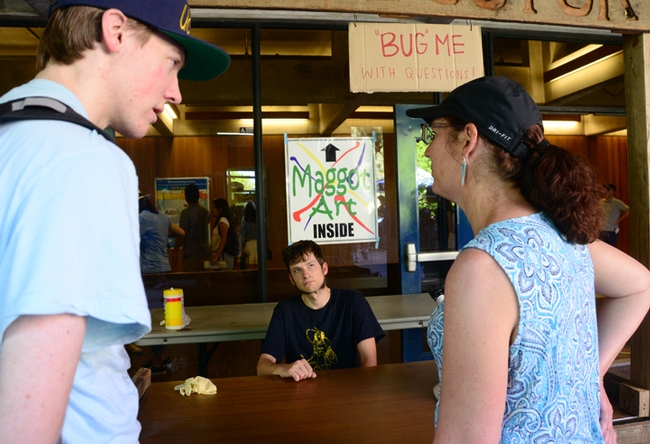 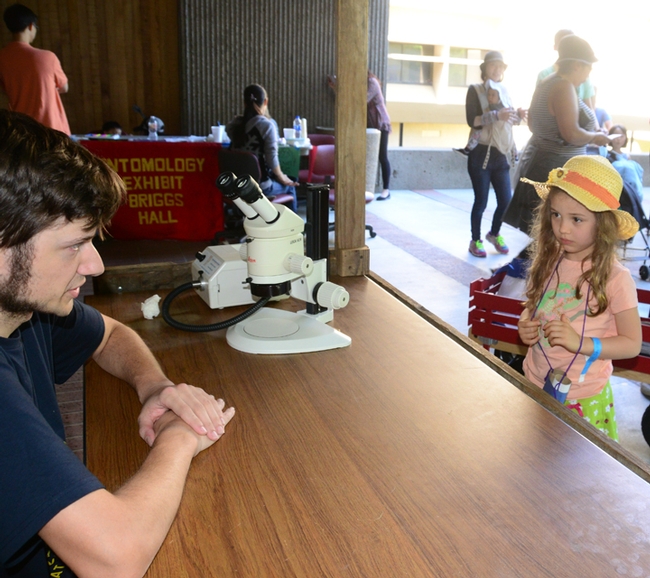 Lynn Kimsey, director of the Bohart Museum of Entomology. (Photo by Kathy Keatley Garvey)
Okay, what's the heaviest insect in the world? The longest? The fastest runner? The fastest flying insect? The loudest? The smallest? The insect with the greatest wingspan?

The Bohart Museum of Entomology's newly published newsletter, written by Lynn Kimsey, director of the museum and a professor of entomology at UC Davis, reveals the answers. She gleaned much of the information from the University of Florida's Book of Insect Records.

So, what is the heaviest insect? "We used to think that several large beetles, including the Goliath beetle and the titan long-horned beetle were the heaviest," Kimsey said. "But now the giant weta, Deinacrida heteracantha White of New Zealand is unquestionably the winner."

It weighs 2.5 ounces, or "more than a mouse," Kimsey said. "OK, so it's not even one pound, but that's still really heavy for an insect."

The fastest runner? That would be the Australian tiger beetle, Cicindela eburneola,  recorded running at 5.5 miles per hour.

The loudest? The North American cicada, Tibicen walkeri Metcalf, which can reach 108 decimels--"about as loud as a rock concert or power saw," Kimsey says.

The smallest adult? The mymarid fairy wasp, Dicopomorpha echmeptrygis Mockford. The males are 139 microns or 0.005 inches.

And if you think rabbits are highly productive, think again. Aphids win for the shortest generation time. "Female aphids are essentially born pregnant," Kimsey says. "Cotton aphids and corn aphids can complete a generation in five days at 77 degrees Fahrenheit. This means that one female and all her offspring could produce more than 1 trillion offspring in a season. That is as many aphids as there are stars in five average-sized galaxies." 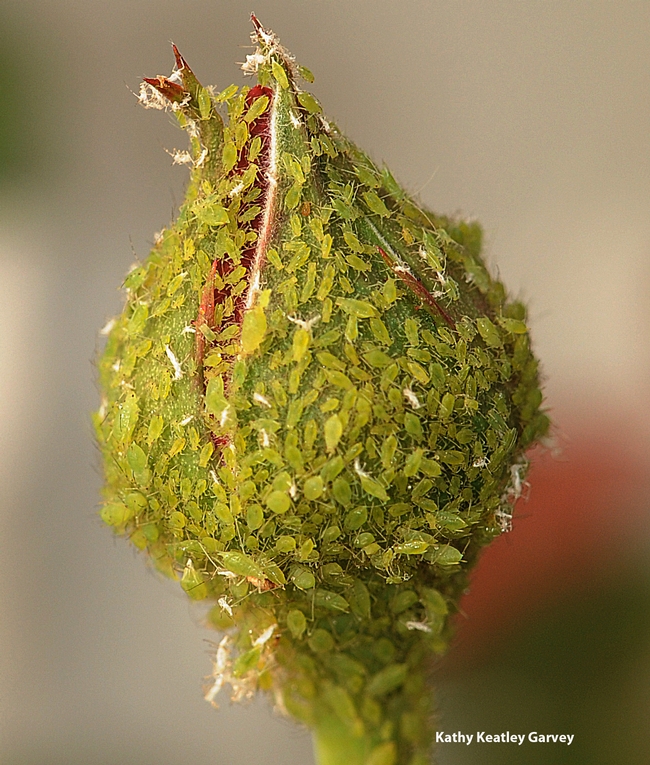 Aphids cover a rose bud. Some aphids can complete a generation in five days. (Photo by Kathy Keatley Garvey) 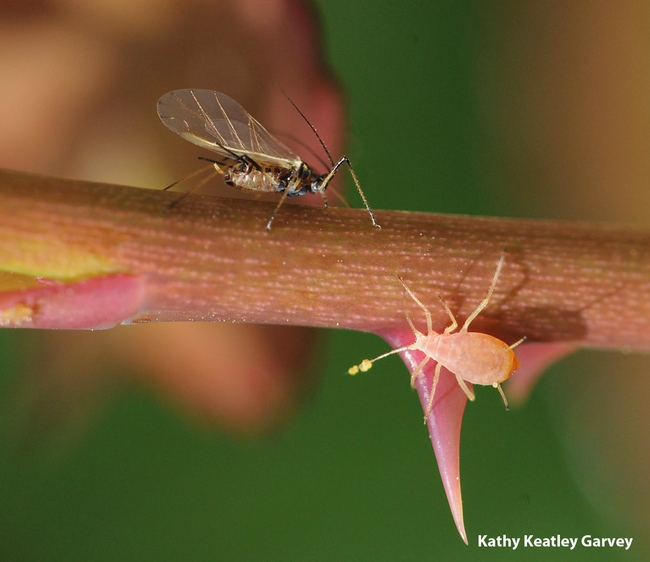