Honey bee expert Eric Mussen of UC Davis offers some good advice in a piece that he and commercial beekeeper Gene Brandi of Los Banos wrote in the current edition of CAPCA Advisor, published by the California Assoiciaton of Pest Control Advisors.

Mussen, an Extension apiculturist and member of the UC Davis Department of Entomology faculty, and Brandi, a long-time beekeeping legislative advocate, emphasized these two points:

1. The best way to protect honey bees from damage by pesticides is to keep them from being exposed.

2. To prevent negative effects of pesticides of all types, do not apply them to blooming plants upon which the bees are foraging.

Pesticides can have "negative effects on queens, drones, developing brood and bee behavior that eventually result in weakened or dead colonies," they wrote.

Honey bees can die from injesting pesticides on plants and in contaminated water.  Or they can be accidentally sprayed, such as when they cluster on beehives on hot evenings and are "hit by applications from directly overhead or by pesticide drift."

Bees carry pesticide residue back to the hive. "All types of pesticides contain some products that are toxic to developing honey bee brood," they wrote.

"It would be nice to think that we know all about the effects of pesticides on adults and immature honey bees, but that just is not the case."

What we do know is that honey bees pollinate about a third of the agricultural crops produced in the United States and the bee population is decreasing. 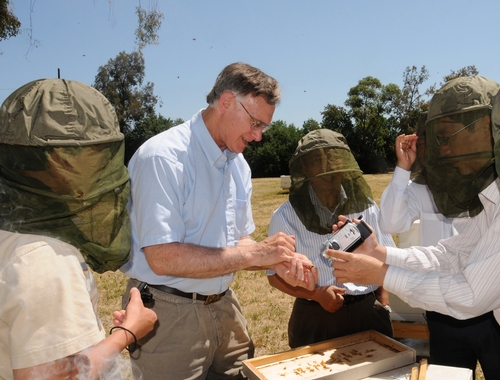