Bug Squad
sitenum=63
Happenings in the insect world
Pardon Me, Is This My Best Side? Is this my best side? A passionflower vine frames a European praying mantis, Mantis religiosa. This image was taken in Vacaville, Calif. (Photo by Kathy Keatley Garvey)
She's easy to find.

A European praying mantis, Mantis religiosa,  hangs out in our passionflower vine, Passiflora, the host plant of the Gulf Fritillary butterfly.

Mantis religiosa is an introduced species, that is, non-native.

She appears ready for her portrait. She's already eaten her fill of butterflies and the sun is setting. The day is almost done.

Praying mantis expert Andrew Pfeiffer of Monroe County, North Carolina, administrator of the Facebook page, Mantis Keepers, says she probably eats caterpillars as well as the adult butterflies. (And just about anything else she can catch. That's what mantids do.)

It's a myth that colors determine the gender of a mantis. “Many myths surround the mantids, most of which are merely superstition or made up,” he told us (See feature on Bug Squad blog). “Colors do not determine the sex of the mantis, with both males and females capable of being different colors. Mantids are capable of changing the color of their body, but only after molting. A green mantid can turn brown in just one molt.”

Fact is, praying mantids fascinate us, and not just when they're "praying," "preying" or eating.

This mantis, nicknamed "My Buddy," is not alone. Two other praying mantids,  known as "My Other Buddies,"  live in our family's pollinator garden and both are the native Stagmomantis limbata, as identified by Pfeiffer. California has only a handful of mantid species, Pfeifer says. The natives include Stagmomantis limbata, Stagmomantis californica and Litaneutria minor. Introduced ones: Mantis religiosa, Tenodera sinensis and Iris oratoria.

"My Other Buddies" are both gravid females, as well. One is green and hangs upside down on the milkweed, blending in with the greenery while it ambushes assorted bees. The other, also green, prefers to perch in a patch of red/yellow lantana, camouflaged amid the green leaves and stems. There it snags assorted Lepidoptera--skipper butterflies, cabbage white butterflies and moths.

The three have never met. 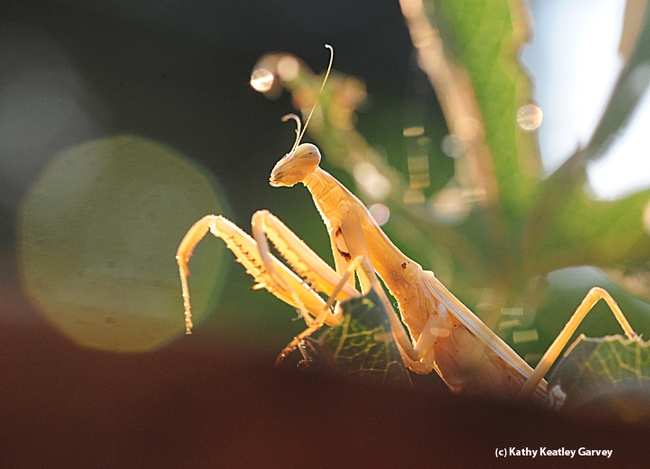 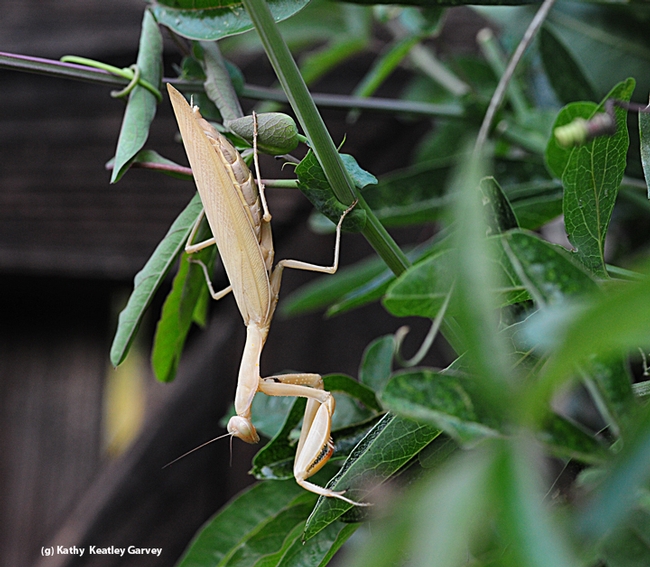 The European praying mantis, Mantis religiosa, can be many colors, but this one is a light brown. (Photo by Kathy Keatley Garvey) 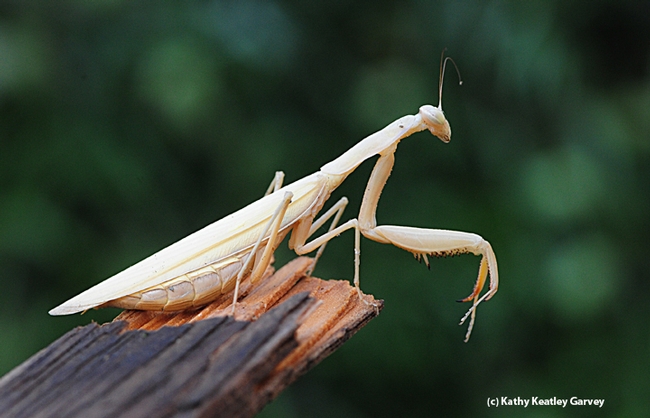