Bug Squad
sitenum=63
Happenings in the insect world
Extra, Extra, Read All About It!

Extra, extra, read all about it!

This "extra" has nothing to do with a special edition of a newspaper.

This "extra" deals with something that may puzzle you.

This "extra" refers to the passionflower vine (Passiflora), the host plant of the Gulf Fritillary butterfly (Agraulis vanillae).

About this time of year, the Gulf Frit caterpillars have probably skeletonized your passionflower vine.  It's the Halloween poster child of the plant world.

But why, then, are honey bees foraging on a flowerless Passiflora? Their activity has nothing to do with pollination. They're foraging on the leaves  and stems. And they're not seeking water.

It's a subject unfamiliar to many non-botanists and non-biologists.

Wikipedia describes it this way: "Nectar is a sugar-rich liquid produced by plants in glands called nectaries, either within the flowers with which it attracts pollinating animals, or by extrafloral nectaries, which provide a nutrient source to animal mutualists, which in turn provide antiherbivore protection."

Lenore Durkee of Grinnell (Iowa) College wrote a scientific paper, "The Floral and Extra-Floral Nectaries of Passiflora," published in the October 1982 edition of the American Journal of Botany, that answers the question and explains the phenomenon.

She defined extra-floral nectaries as "glands that secrete primarily sugars and are found on the vegetative portions of many species of plants."

In her research, Durkee studied the extra-floral nectaries of nine species of Passiflora with light and electron microscopy prior to and during secretion. In her abstract, meant for botanists, she wrote: "There is no evidence of ER or Golfi participation in the secretion of nectar. The vascular tissue supplying the nectary is characterized by companion and pholem parenchyma cells which are usually larger than the sieve elements, a configuration similar to that found in leaf minor veins. In the petiolar nectaries, large masses of membrane-bound protein are commonly found in these cells. This protein is absent in laminar nectaries."

That's probably TMI (too much information) unless you're a botanist.

No worries. The bonus is this: the next time someone asks you why honey bees are foraging on the leaves and stems of your Passiflora (don't you hear that all the time?), you can answer  "Extra Flora Nectaries" or "EFN."  You can explain that flowers produce nectar but extra-floral nectaries are just nectar-producing glands physically apart from the flower. And, you could add that EFN occurs in more than 2000 plant species in more than 64 families, according to scientists at University of Florida Extension.

So do a lot of other insects, including those hungry Gulf Fritillary caterpillars that eat everything in sight...and out of sight... 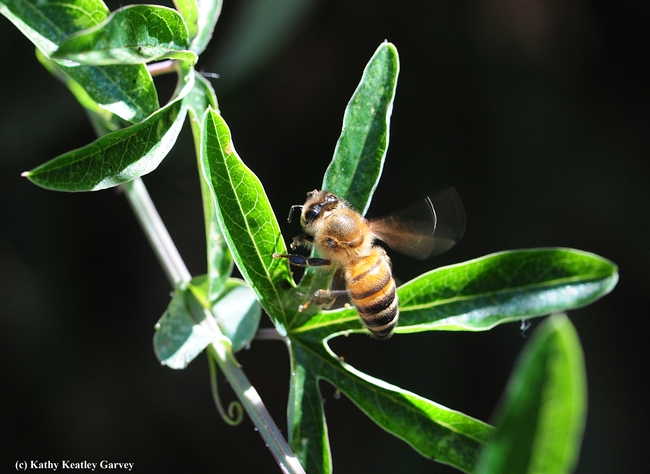 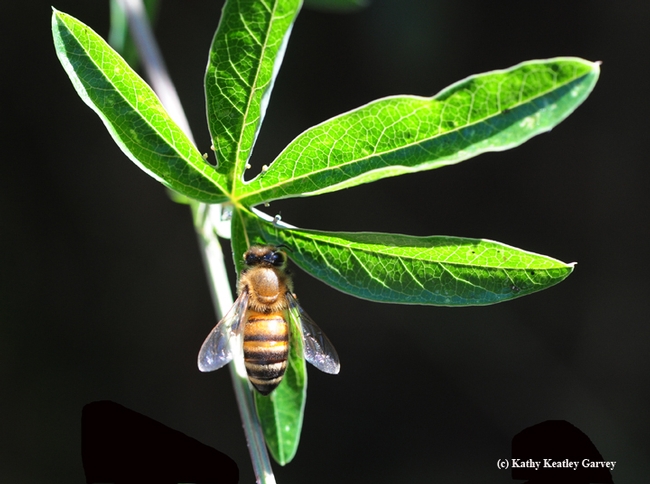 What is the honey bee seeking on the passionflower vine? (Photo by Kathy Keatley Garvey) 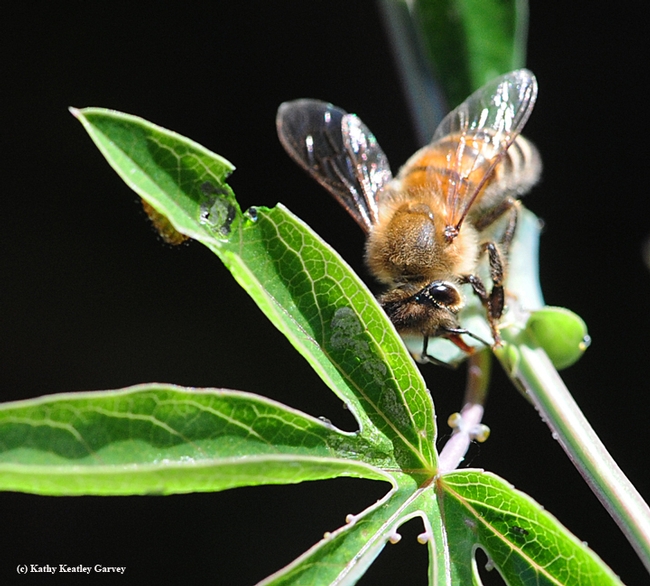