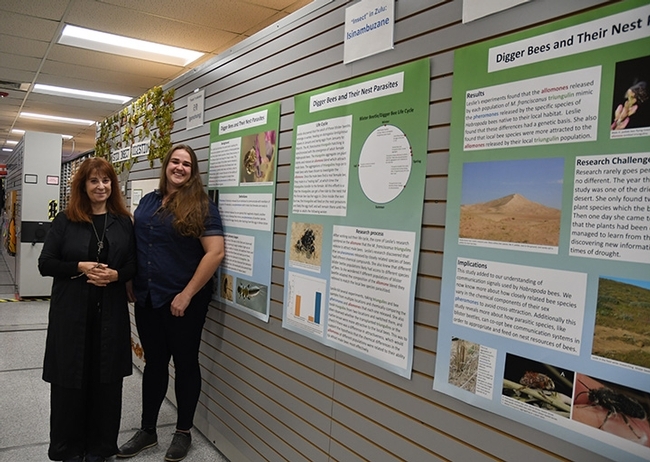 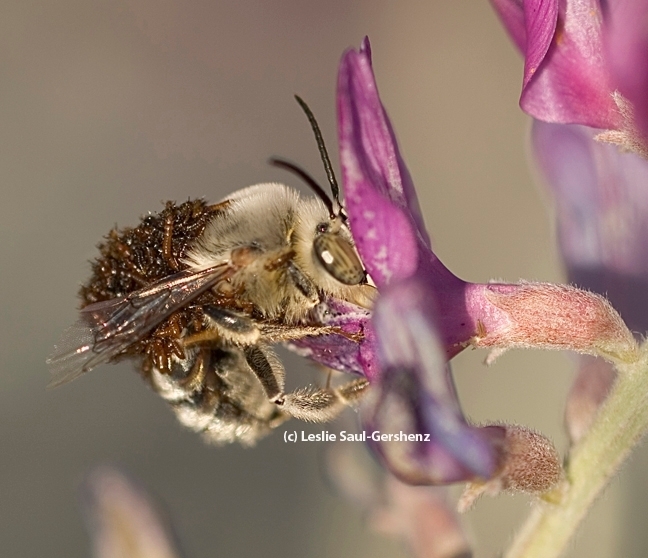 However, there may be sad ending...more about that later.

Members and their guests will gather Nov. 7 at 9:15 a.m.  at their meeting site, the Contra Costa Mosquito and Vector Control District conference room, 155 Mason Circle, Concord.  for coffee and registration.

Then, at 9:30 a.m., Saul-Gershenz will discuss “Meloid Parasites of Solitary Bees."  A  graduate student in the Neal Williams lab, UC Davis Department of Entomology and Nematology, and a co-founder of SaveNature.Org, Saul-Gershenz researches a solitary ground-nesting bee, Habropoda pallida and its nest parasite, a blister beetle, Meloe franciscanus, found in the Mojave National Preserve.

"The solitary bee is the first native bee to emerge in the spring on the Kelso Dunes in the Mojave National Preserve," said Saul-Gershenz.  “The adult beetles emerge on the dunes in the winter months at Kelso Dunes and feed exclusively on the leaves of Astragalus lentiginosus, which leafs out in January."

Keeping the Bees: Why All Bees Are at Risk and What We Can Do to Save Them by Laurence Packer and published in 2011 by HarperCollins Publishers, Ltd.

Cuticular Hydrocarbons: Biology, Biochemistry and Chemical Ecology by editors A. Bagnères-Urbany and G. Bloomquist and published in 2010 by Cambridge University Press.

The Other Insect Societies by James T. Costa, and published in 2006 by the Belknap Press of Harvard University Press.

Now, back to what may be a sad ending.

Following Saul-Gershenz' one-hour talk,  the Nor Cal Entomology Society members will discuss the future of the organization, founded in 1930. Then it was known as the Northern California Entomology Club. Membership continues to be open to all interested persons, with dues at $10 a year. Currently the society meets three times a year: in Sacramento, at UC Davis, and in Concord.

Nor Cal Entomology president Robert Dowell of the California Department of Food and Agriculture will moderate the disussion.

“We have reached a critical juncture in the existence of the organization,” secretary-treasurer Eric Mussen, Extension apiculturist with the UC Davis Department of Entomology and Nematology, wrote to the members in an email. “At its beginning, the society served as the meeting place for entomologists mostly from UC Berkeley and UC Davis, as well as other members who appreciated their lively discussions of research and pest control. Representatives from industry and regulatory establishments also participated. A revolving system of society chairs was instituted and membership was good.”

“Over time, the climate has changed. UC Berkeley no longer has an entomology department or hardly any entomologists anymore,” said Mussen, who will retire from UC Davis in June 2014.

Those planning to attend to hear the talk and discuss the future of the organization should contact Mussen at ecmussen@ucdavis.edu or telephone him at (530) 753-0472 by Nov. 1. And oh, yes, there's a luncheon to be served by Kinder's Meats. Mussen is taking reservations (and payment) for that, too. 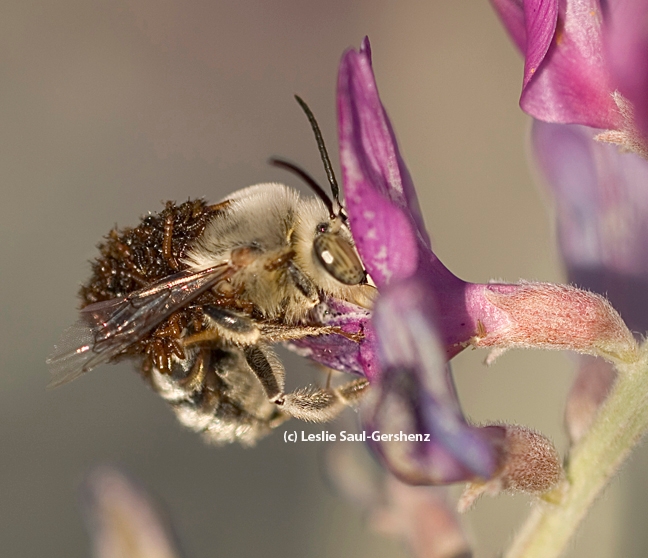 If that word is not in your everyday vocabulary, just think of a symbiotic relationship where one organism transports another organism of a different species for the benefit of both.

And there you have it--at least part of it--of what evolutionary ecologist Leslie Saul-Gershenz of the University of California, Davis, is doing.

She and Neal Williams (her major professor) of UC Davis and Jocelyn Millar of UC Riverside just received a grant to study digger bee ecology and conservation. They're working with SaveNature.Org, which Saul-Gershenz co-founded.

The relationship between the bee and the blister beetle is part of it.

What's this symbiotic relationship about? The larvae of the parasitic blister beetle produce a chemical cue or a pheromone similar to that of a female solitary bee to lure males to the larval aggregation. The larvae attach to the male bee and then transfer to the female during mating. The end result: the larvae wind up in the nest of a female bee, where they eat the nest provisions and likely the host egg, Saul-Gershenz says.

Like to read more about this exciting research? Saul-Gershenz and Millar published their blister beetle/digger bee work, "Phoretic Nest Parasites Use Sexual Deception to Obtain Transport to their Host's Nest," in the Proceedings of the National Academy of Sciences (PNAS, 2006).

That led Pulitzer Prize-winning author Natalie Angier to feature their work in "The Art of Deception," published in the August 2009 edition of the National Geographic magazine. Most recently, U. S. Department of Agriculture (USDA) Forest Service entomologist Michael Ulyshen, writing for the Journal of Natural History, mentioned their work in "Bugback Riding: Transportation for the Masses" (September 2011).

Saul-Gershenz said she became interested in the subject while she was a graduate student at San Francisco State University. She wrote "Beetle Larvae Cooperate to Mimic Bees" in the journal Nature (2000).

You may know Saul-Gershenz as a past president of the Pacific Coast Entomological Society. In 1991, she became the first female president in its 91-year history. 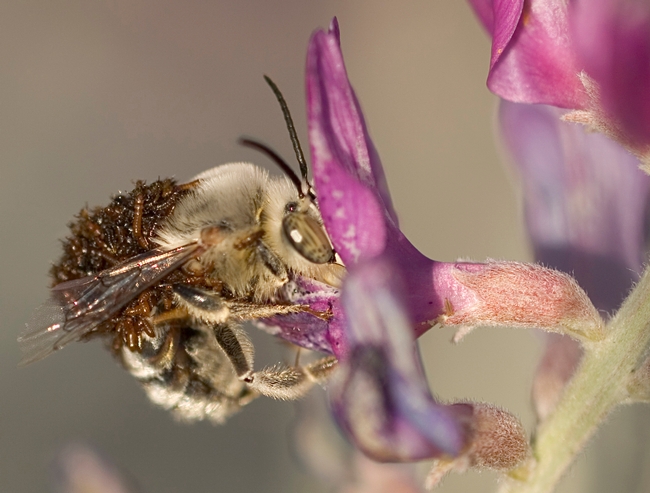 Larvae of a blister beetle, Meloe franciscanus, on a digger bee, Habropoda pallida. (Photo by Leslie Saul-Gershenz, used with permission) 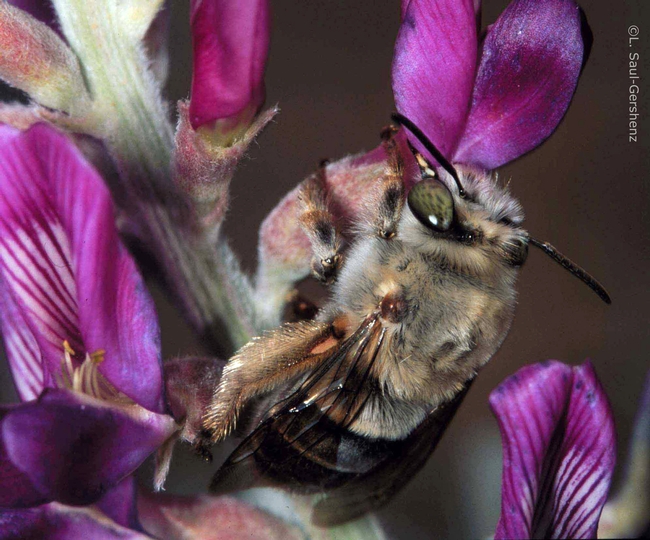