Jessica Gillung, shown here at the Bohart Museum of Entomology, is the recipient of the Marsh Award for Early Career Entomologist, sponsored by the Royal Entomological Society. (Photo by Kathy Keatley Garvey)
Congrats to Jessica Gillung for a well-deserved honor!

Gillung, a postdoctoral fellow at Cornell University and a UC Davis alumnus, is the recipient of the prestigious Marsh Award for Early Career Entomologist, sponsored by the Royal Entomological Society.

She is the first UC Davis-affiliated scientist to win the award. She will receive a certificate, 1250 pounds ($1,624) and an expense-paid trip to London to receive the award at the Ento 19 conference, set Aug. 20-22 at the London School of Hygiene and Tropical Medicine.

Gillung's work on spider flies, involving genomics, phylogenetics, systematics, and comparative analyses, “has increased our understanding of the biological patterns and processes that have shaped our planet's biodiversity,” wrote her major professor and award nominator Lynn Kimsey, director of the Bohart Museum of Entomology and a professor of entomology, UC Davis Department of Entomology and Nematology.

Gillung received her doctorate in entomology from UC Davis in December 2018, studying with Kimsey and mentor Shaun Winterton, insect biosystematist, California Department of Food and Agriculture, and a member of the Royal Entomological Society. Gillung also collaborated with ant specialist and taxonomist Phil Ward, professor, UC Davis Department of Entomology and Nematology.

Gillung is now a postdoctoral associate at Cornell University in the Bryan Danforth lab, where she is researching Apoidea (stinging wasps and bees) phylogenomics, evolution and diversification.

Her dissertation, “Systematics and Phylogenomics of Spider Flies (Diptera, Acroceridae),” focused on the evolution, conservation, biology, and taxonomy of spider flies, a group of spider natural enemies,

Gillung's taxonomic work on spider flies, described as landmark, included identification keys and morphology-based diagnoses of species using modern techniques of cybertaxonomy—the application of the internet, digital technologies, and computer resources to increase and speed up the discovery and cataloging of new species, Kimsey wrote. “Using cybertaxonomic tools, Jessica described 25 new spider fly species herself, and in collaboration with fellow entomologists, three fossil species from Baltic amber, described in her first dissertation chapter. Cybertaxonomy is a powerful tool that allows researchers and citizen scientists to collaborate in real time and across great distances to increase the speed and efficiency of biodiversity discovery.”

“Jessica unraveled the functional and ecological implications of key morphological traits, as well as their distribution across the Tree of Life,” Kimsey said. “In her doctoral dissertation, she established new homologies for the wing venation of spider flies and conducted detailed and assiduous dissections of male reproductive structures (i.e., genitalia) to understand homologies, demonstrating that morphological traits are dynamically evolving systems useful for both classification and inference of evolutionary history.”

Since many insect species are threatened, geographically restricted, or relatively rare in nature, Gillung performed non-destructive DNA extraction of specimens housed in entomological collections, including the Bohart Museum of Entomology. Gillung collected molecular data from decades-old insects without damaging the specimens.

The UC Davis alumnus is known for her “phenomenal leadership activities, her nearly straight-A academic record (3.91 grade point average), her excellence as an entomologist and teacher, her public service and outreach programs (from 2013 to 2018, she reached more than 20,000 people at UC Davis-based events) and her incredible publication record, Kimsey said. “She published 11 refereed publications related to her thesis in very strong journals. Most entomologists do not publish nearly that much, even as a postdoctoral scholar or a junior faculty member.”

A recipient of numerous other awards, Gillung won the prestigious international award for “Best Student Presentation Award” at the ninth annual International Congress of Dipterology, held in 2018 in Windhoek, Namibia. She also won the 2019 Early Career Award from the Pacific Branch, Entomological Society of America (PBESA) and the 2018 PBESA Student Leadership Award. PBESA encompasses 11 western states, U.S. territories and parts of Canada and Mexico.

Gillung was a key member of the 2015 PBESA championship Linnaean Team that went on to win the ESA national championship. The Linnaean Games are lively question-and-answer, college bowl-style competition on entomological facts played between university-sponsored student teams.

Gillung also collaborated on a project aimed at encouraging students to attend and participate in the Orlando, Fla., meeting of the International Congress of Entomology. She and several colleagues published a paper entitled “From the Students to the Students: Why YOU need to Attend ICE 2016.”

The Royal Entomological Society will publish her biography and photo in its Antenna magazine, on the society website, and in the Marsh Christian Trust Award brochure. 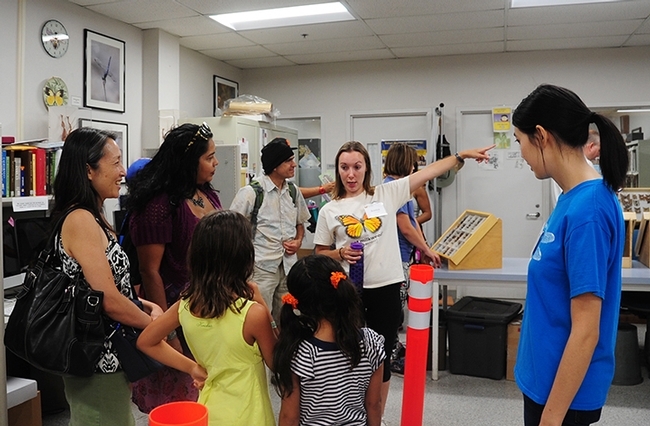