Bug Squad
sitenum=63
Happenings in the insect world
'Out with the Old?' Not!

The huge feral honey bee colony that we photographed Jan. 9, 2011 in a Modesto ash tree at a Vacaville (Solano County), backyard, is still going strong. Thirty feet off the ground, the structure is solidly intertwined in the limbs of the old tree and is truly a sight to bee-hold.

Bee scientists at the Harry H. Laidlaw Jr. Honey Bee Research Facility, UC Davis, estimate it's been there since the spring of 2010. Leaves shroud it much of the year, but when the leaves drop, it's very much exposed.

On Sunday, Jan. 1, it will enter its third year of existence, which is quite remarkable in itself. Several UC Davis bee experts figured it wouldn't make it through the 2010-2011 winter. "If it lasts, I want that queen!" bee breeder-geneticist Susan Cobey quipped.

Well, it's lasted. And we're now in the second winter.

The homeowner just told us that "Yes, the feral bee colony is still there!  Now that most of the leaves have blown off the tree, so it's much easier to see.  The bees still come down to the deck to walk, not fly around. I'm surprised that it's remained viable for so long.  The bees still buzz busily around the structure!  What an amazing natural phenomenon!"
The photo (below) of the feral honey bee colony that first appeared in Bug Squad has attracted a lot of attention. A TV producer asked to borrow it for a recent episode of My Extreme Animal Phobia (Animal Planet), about a guy deathly afraid of honey bees. If you saw the entire episode--some of it filmed at the Laidlaw facility and some of it filmed in the quarters where a Sacramento clinical psychologist was treating him--you saw the photo on a bedroom wall.

We don't know how this magnificent structure could instill fear. For us, it instills only wonder, amazement and admiration. 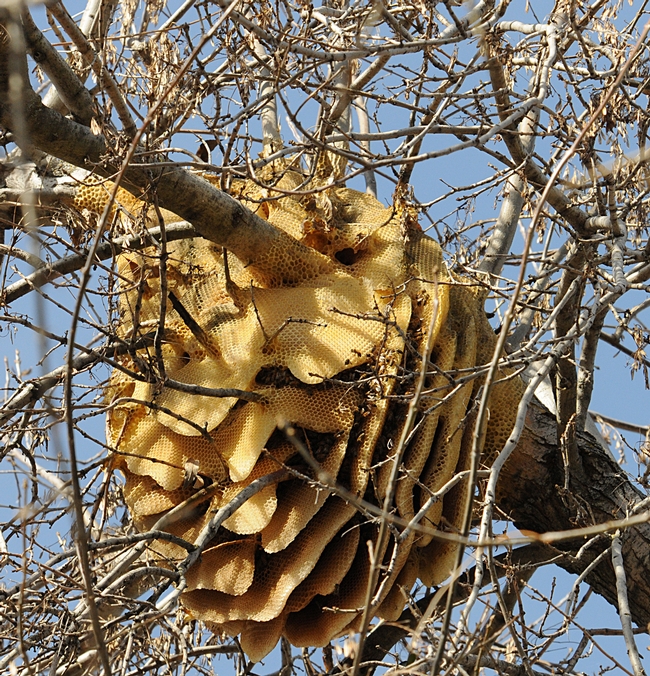 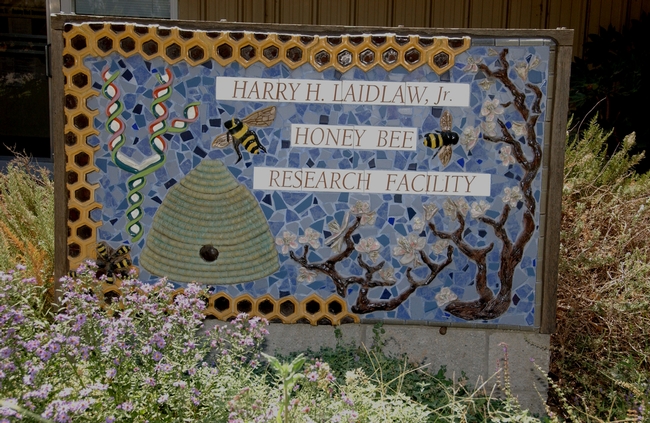 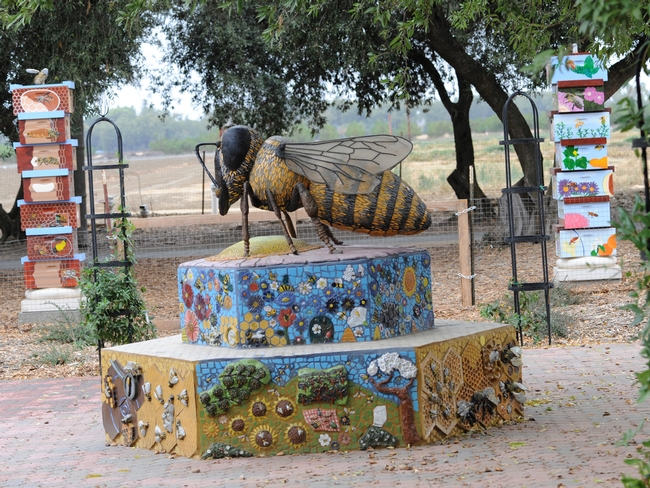 Are you afraid of bees?

Not apiculturist Norman Gary, emeritus professor of entomology at UC Davis and a professional bee wrangler.

He worked behind the scenes in a new Animal Planet program, “My Extreme Animal Phobia,” scheduled to be broadcast Friday, Nov. 11 at 10 p.m. (Sacramento area listing) on the Animal Planet Channel.

“It is a story about a man who is extremely afraid of bees,” Gary said. “He is treated successfully by various exposures to bees and consultation with a psychologist.'

Although Gary played a central role in the treatment of the man’s phobia, he may or may not appear in the program.

But the bees he trained will.

Some of the filming was done at the Harry H. Laidlaw Jr. Honey Bee Research Facility on Bee Biology Road, UC Davis.

According to TV Guide, the program will be repeated on Saturday, Nov. 12 at 5 a.m. and on Wednesday, Nov. 16 at 10 p.m. in the Sacramento area. See schedule.

Gary also did bee wrangling for another episode of Fear Factor, which enters a new season in December.

“Keeping bees is far more challenging than caring for common pets,” says Gary, who retired in 1994 from UC Davis after a 32-year academic career and is the author of a newly published book on beginning beekeeping titled “Honey Bee Hobbyist: The Care and Keeping of Bees.”

He once trained bees to fly into his mouth to collect food from a small sponge saturated with his patented artificial nectar.  He holds the Guinness World record (109 bees inside his closed mouth for 10 seconds) for the stunt.

Norm Gary is definitely a guy who loves his bees. 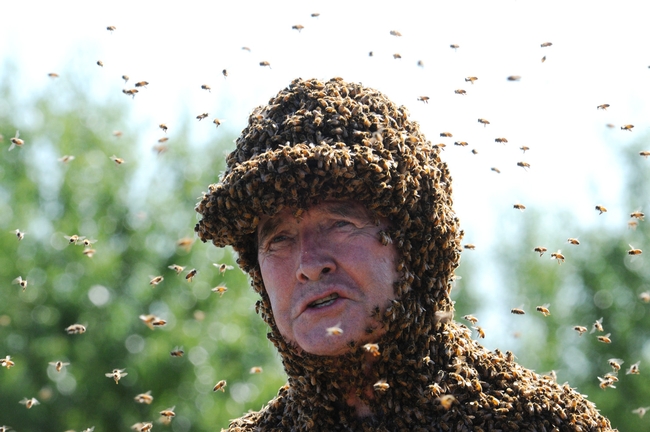 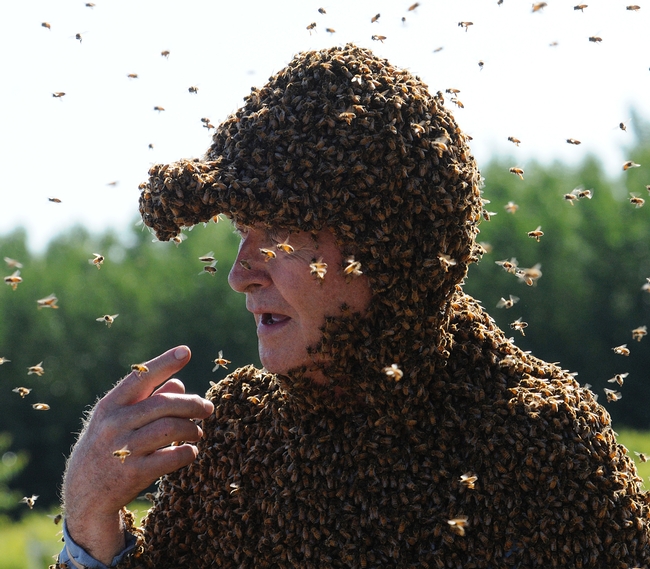