And what a find.

It was a sea-green mottled moth that looked a lot like lichen.

Art Shapiro, distinguished professor of evolution and ecology at UC Davis, and Bohart Museum of Entomology associate Greg Kareofelas of Davis identified it as a late-winter noctuid, one that simulates lichen.  Feralia februalis.

"It's expected this time of the year," noted Kareofelas.

It's a food plant specialist that feeds on oaks.

A Pacific Northwest website on moths indicates that it flies in oak forests in western Oregon in the early spring: "This species is narrowly endemic to the West Coast.  In Oregon, it is common in oak woodlands and mixed hardwood forests with oaks at low elevations west of the Cascades.  This species is considered to be management sensitive, depending on oaks as a larval food plant."

In the Pacific Northwest, "Feralia februalis is limited to western Oregon in our region," the website says. "Its range extends north to the Columbia River but it has yet to be found in adjacent Washington."

Its global range? "The range extends south through California where it occurs in the western part of the state to the Mexican border. It is also present in the northern Sierra Nevada."

One more thing: "It is nocturnal and comes readily to lights." 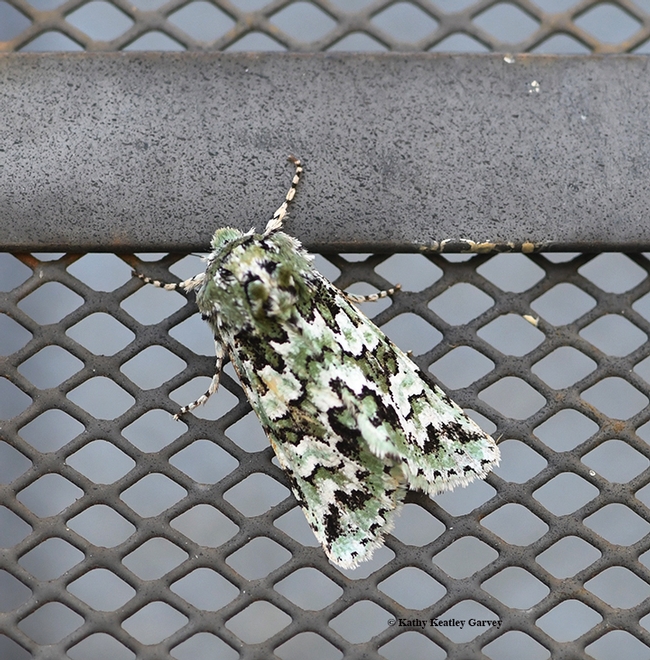 Well, hello, there! A late-winter noctuid, Feralia februalis, on a screen door below a porch light. (Photo by Kathy Keatley Garvey) 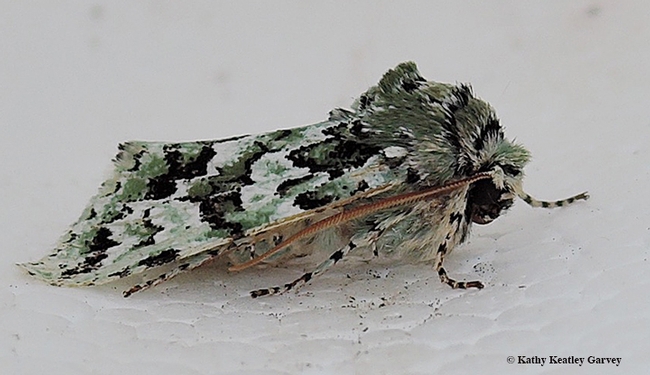 A green caterpillar, aka larva, aka worm, occupied a blanket flower (Gaillardia) last Friday morning in the Häagen-Dazs Honey Bee Haven, a half-acre pollinator garden on Bee Biology Road at the University of California, Davis.

Soon a honey bee from the nearby Harry H. Laidlaw Jr. Honey Bee Research Facility landed on it. And then a Painted Lady butterfly, its wings tattered from predatory attacks, joined the duo.

Well, what WAS that green caterpillar?

We asked butterfly expert Art Shapiro, distinguished professor of entomology at UC Davis. "Well, it's a Noctuid (owlet moth family)," he said. "It may be one of the infinite variety of color forms of the tobacco budworm, Heliothis virescens, which is common right now--the fine lengthwise striations suggest that--but maybe not."

He suggested we contact his colleague, David Wagner, professor of ecology and evolutionary biology at the University of Connecticut.

"I am guessing that it is either Heliothis virescens as suggested by Art or Helicoverpa zea," Wagner said, looking at the photo.  "Both equally probable.  The former often favors plants with glandular secretory hairs: Solanaceae, geranium, etc."

According to Wikipedia, the Noctuidae or owlet moths "are a family of robustly build moths that include more than 35,000 known species out of possibly 100,000 total, in more than 4,200 genera."

Most fly at night. Many are drawn to sugar and nectar-rich flowers. Some head over to the Häagen-Dazs Honey Bee Haven.

As for Helicoverpa zea, it's a major agricultural pest. It's known by various names, depending on what it consumes. When it consumes tomatoes, it's a tomato fruitworm. Cotton? Cotton bollworm. Corn? Corn earworm. And the list goes on.

We thought that perhaps a neighboring praying mantis would take a culinary interest in the worm, but not so.

The Noctuid appeared to a landing strip for honey bees and Painted Ladies (Vanessa cardui).  They kept touching down and pulling up.

As Extension apiculturist Eric Mussen of the UC Davis Department of Entomology quipped: "If you're in the middle of the road, you're going to get hit." 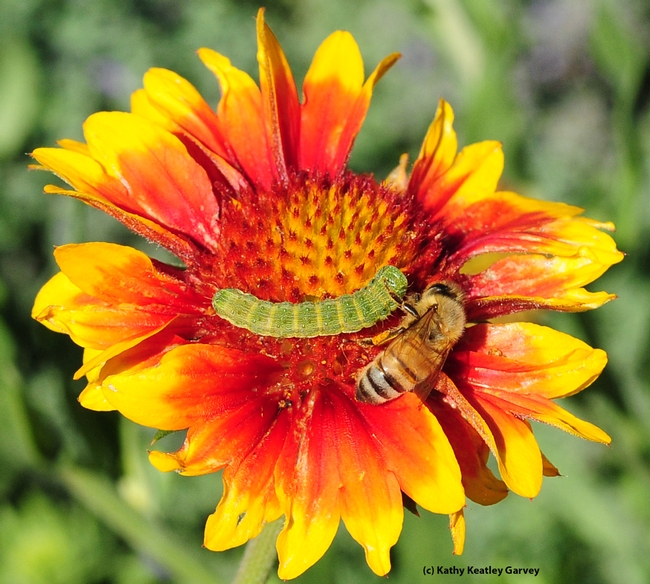 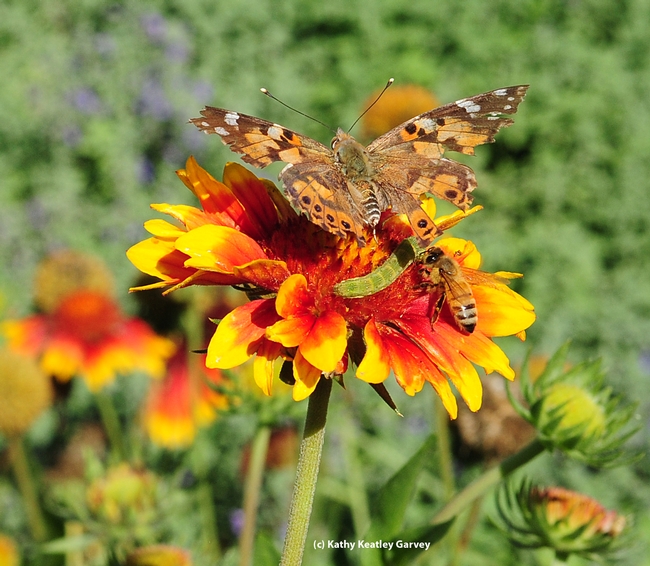 When award-winning photographer Teresa Willis of Vacaville encountered a red caterpillar on a dirt road at about 6000 feet in a canyon north of Paradise Valley, Nev., she did what photographers do--she captured an image of it.

And posted it on her Facebook page where some of her friends likened it to the Oscar Mayer weiner.

The caterpillar is indeed red. Bright red. Well, what is it?

Renowned butterfly expert Art Shapiro of UC Davis, who knows about such things, says it is the larvae of an owlet moth (family Noctuidae) "and the species is probably Noctuid."

"It's infested with the parasitic nematode Heterorhabditis bacteriophora, a generalist parasite of insect larvae, which it turns bright red," Shapiro says. "Experiments have shown that this acts as a warning color, deterring visual predators (such as birds) from eating them (and the nematodes in the process)."

Hardly any Lepidoptera escapes identification from Art Shapiro, who maintains the popular website, Art's Butterfly World at http://butterfly.ucdavis.edu/ and is a UC Davis professor of evolution and ecology.

As for Teresa Willis (see more of her work at http://www.redbubble.com/people/teresalynwillis), you can say she got the red out.

With the help of a parasitic nematode, Heterorhabditis bacteriophora. 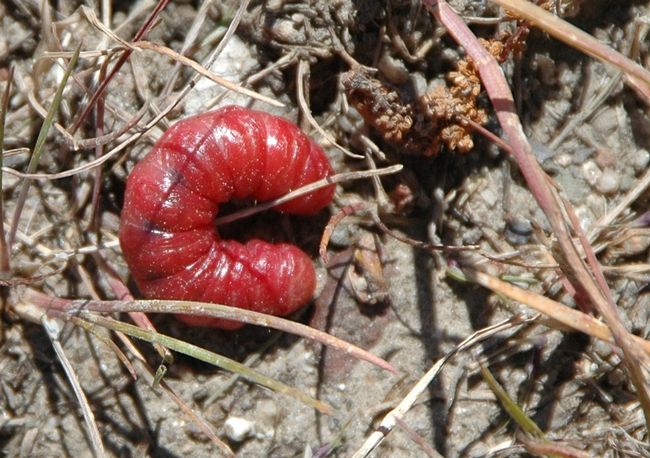 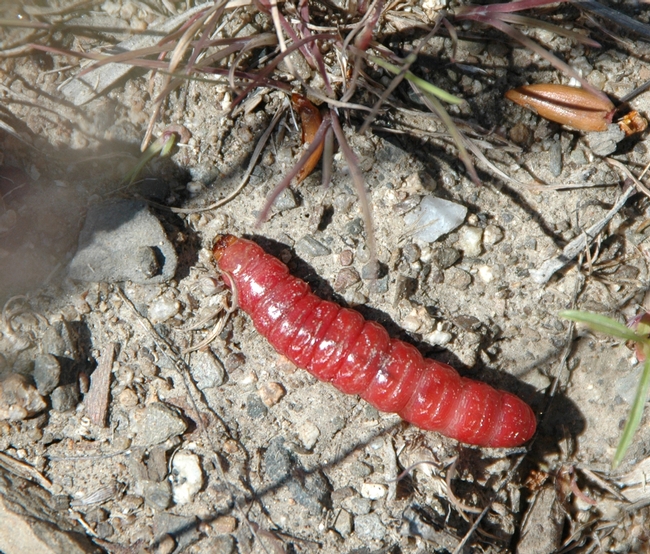